I have a rule about not downloading or playing any mobile games. One of the biggest reasons is I don’t need to be “plugged in” to something 24/7, and another being that when I get into something, I really get into it. However, a buddy of mine told me about a free to play RPG that fuses several things I enjoy. You’ve got a real-time RPG that uses pinball as its battle system, couple that with the waifu gacha, and personally, that’s a recipe for success. World Flipper just enjoyed their global release after being an exclusive in Japan since 2019, so for the sake of review I bit the bullet, dove in (rather hard actually), and am ready to review the game to the best of my ability. END_OF_DOCUMENT_TOKEN_TO_BE_REPLACED

There’s this great little real time puzzler game called Mini Metro that you may have heard of before. Well, a few years later and a sequel was produced. This time, instead of managing metro lines, you are tasked with creating intricate (read spaghetti) roadways as cars try to reach their destinations as efficiently as possible. It may sound simple, but it’s one challenging game! As a sequel, it takes the gameplay loop I already loved from Metro and makes it even more compelling, but there are some things that could still be better. END_OF_DOCUMENT_TOKEN_TO_BE_REPLACED

Ever since its release mid-October 2019, I’ve had a keen interest in playing Disco Elysium, a cop-drama, RPG with a focus on philosophical and political quandaries. Recently, however, it got a big (FREE) update and the timing finally felt right; so I played it! You play a man with amnesia, he can’t even remember he’s a cop! And yet, you are tasked with solving an increasingly perplexing case in a town with a rich history and many secrets of its own. You are free to mold yourself how you will, approach every situation however you’d like, and hopefully, solve the mysteries the game has to offer with as few casualties as possible. So here I am, a reviewer of sorts, to tell you just what I think of Disco Elysium. END_OF_DOCUMENT_TOKEN_TO_BE_REPLACED

I’m really not sure what possessed me to try out the recently released Eternal Return:  Black Survival, a free to play battle royale MOBA hybrid. I’m not a huge fan of either types of games save for a select few titles in each respective genre. However, I gave it a go on a whim and have now invested about 10 hours into the game itself. The experience is one that is simultaneously frustrating, but keeps me coming back for more. Let’s dive right into why I think Eternal Return is worth your time. END_OF_DOCUMENT_TOKEN_TO_BE_REPLACED

In the world of anime Gen Urobuchi is someone who needs no introduction. You might recognize him for such titles as Madoka Magica and Psycho-Pass, but his career actually goes a lot deeper than this. Last year I spent a ton of time researching and familiarizing myself with his creations for a review of Phantom: Requiem for a Phantom (which I recommend you give a look as I don’t want to retread that same information here), upon doing so, I was reminded of today’s focal point:  The Song of Saya. END_OF_DOCUMENT_TOKEN_TO_BE_REPLACED

It’s very rare for me to want to jump on a new game, especially at a $40 price point given my current level of income, but Gunfire Games convinced me with Remnant:  From the Ashes. What’s often hailed as “Darksouls, but with guns”, I was skeptical that I would enjoy this game given my relationship with both Darksouls and Bloodborne. They are frustrating games that I just don’t really enjoy that much, so what exactly makes Remnant click for me? Let’s dive in and find out why this is my game of the year. END_OF_DOCUMENT_TOKEN_TO_BE_REPLACED

I held off on doing my review of Night of Full Moon because I wanted to explore a good chunk of its content prior to review, but I’m finding that there is actually just too much content for me to justify holding this off any longer. As such, I’m here to let you know that if you like games such as Slay the Spire, but don’t have the budget, then this is an excellent free alternative! END_OF_DOCUMENT_TOKEN_TO_BE_REPLACED

That is to say, I’m never going back to the original Dota Auto Chess mod now that Valve has released their own standalone version of the game available on Steam, and mobile platforms for free. When I first heard word of this new entry in the “Auto Chess” genre, I thought it was a good move but just wasn’t sure if they’d be able to land it. After all, these are the folks who brought us Artifact, which was a total disaster despite its excellent gameplay. Having been enjoying the game in closed beta though, I can confidently say that this is a great game that is moving in the right direction. END_OF_DOCUMENT_TOKEN_TO_BE_REPLACED

Today I felt like sharing some recent creative endeavors I’ve been undertaking. I’ll be talking about Wallpaper Engine, a tool that lets you make amazing animated wallpapers as well as sharing some of my works with you guys. If you like what you see here, don’t be afraid to reach out and request something yourself. With that said, let’s start with the review. END_OF_DOCUMENT_TOKEN_TO_BE_REPLACED

More Than a Monster Hunter Clone

You’ve probably heard of a “new” game that’s become quite popular on the Epic Games store recently called Dauntless. It’s out for PS4, Xbox, and PC with a Switch port coming soon. Even better than that, it is 100% free to play. So what exactly is Dauntless and why is it so popular?

This game has actually been around for some time, since 2017, but it never gained traction until just recently. Many wrote this off as a buggy and inferior copy of the smash game series, Monster Hunter, but after some time in the oven and a wide release on multiple platforms, it seems things have really turned around for Phoenix Labs. 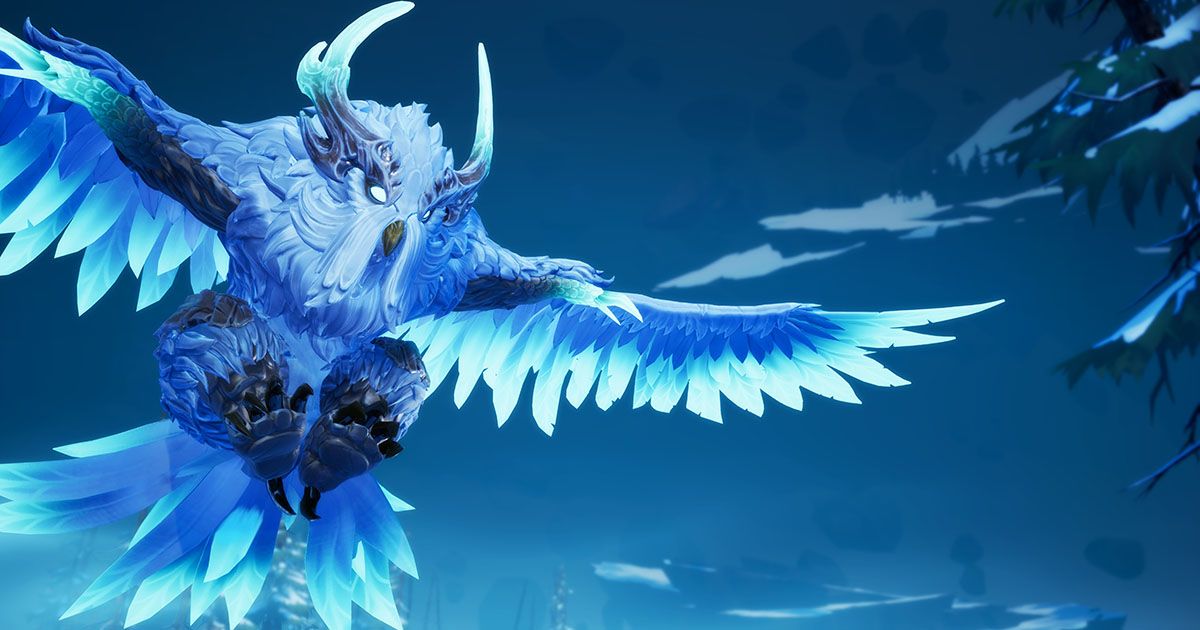 I’ll admit that I was skeptical of the game. I don’t like Monster Hunter and it seemed like the kind of grind that would get old fast. However, something compelled me to give this a try and I’m really glad that I did. What I discovered was a game that was great for popping in and out of with a nice community.

As I’ve mentioned, the game is not dissimilar to Monster Hunter, specifically World. The key difference being that Dauntless is more of an arcade-y experience working on a free to play model. Don’t let that scare you though because the game is extremely solid and friendly to those not wanting to invest a cent.

For an open beta product, the foundation of the game is extremely solid. You can choose from one of several weapons ranging from a sword, spear, or guns, called “repeaters” in this game. Each weapon has various elemental forms that can be upgraded and modified as you play to best counter each monster.

What I particularly like about this is the mastery system Dauntless has. As you use each weapon, you unlock mastery in it. This in turn grants you new ways to further customize your weapon of choice. However, the game also gives players an incentive for keeping a more well-rounded approach by having quests and challenges that grant rewards tied to getting just a little bit better with every weapon. 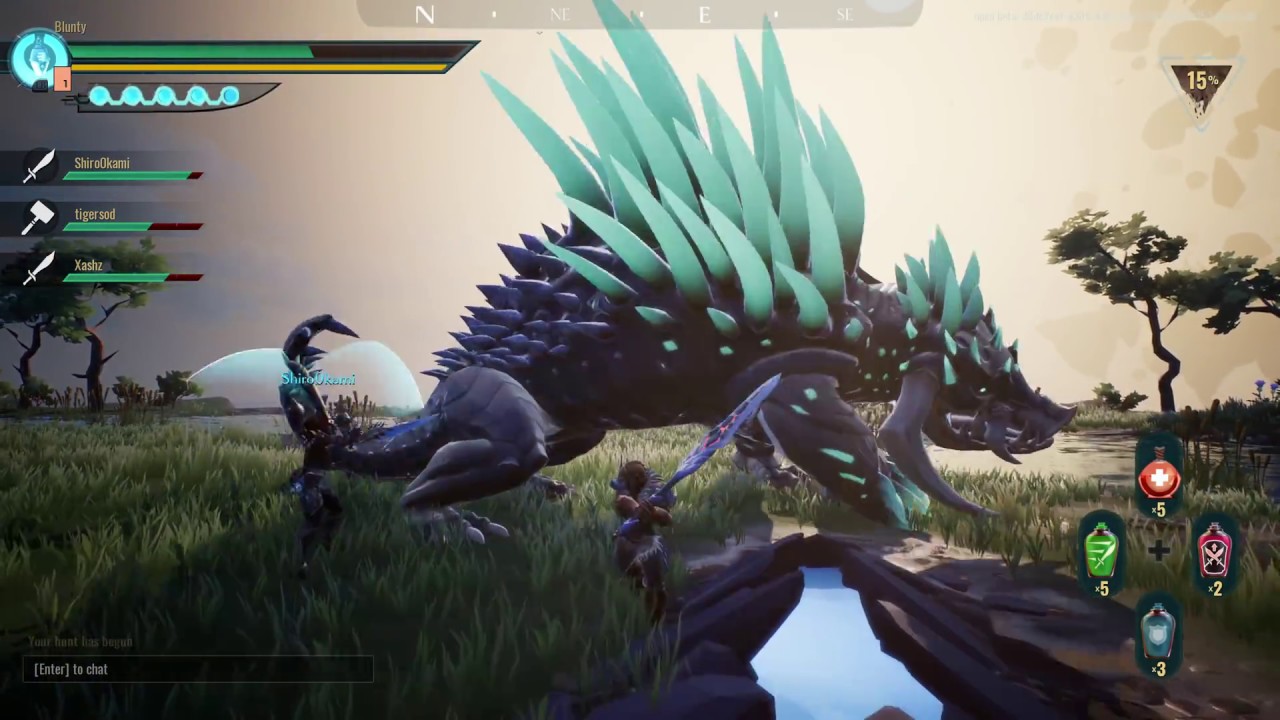 As for micro-transactions, there are some. The worst of the bunch is the needless “Hunt Pass” which is a weird battle pass thing in a free to play MMO type game. That said, it only grants a very minute bonus to resource gathering as well as additional premium currency that you otherwise wouldn’t get right away. At least, that’s all that it impacts in terms of gameplay. You do get several cosmetic items by purchasing the pass but it is by no means necessary.

Free users still gain rewards on the Hunt Pass, just a lot less after the initial few levels. Still, free users do gain many of the same things the paid users get, just in smaller quantities. What you’ll largely miss out on is cosmetic items.

Having put in several hours over the course of two weekends, I can confidently say that the Duantless has a solid playerbase that is ready and willing to help new players. It doesn’t take long to get to a pretty competent level either. I’m already at some pretty high-end stuff with multiple sets of highly leveled gear.

Fighting the monsters has been largely rewarding. Only a few are slightly frustrating but each is pretty different than the last. When I was talking about weapons earlier, you really are rewarded for having mastery over a couple because some weapons do way better against certain monsters. As you play, you pick that stuff up in an organic kind of way and it is really satisfying.

It’s not all sunshine and roses though. Every now-and-again, the servers seem to be overloaded. You may disconnect in the middle of a 15 minute battle and lose out on all that work. Also, the devs haven’t implemented loadout slots yet so you are constantly needing to shuffle around gear.

These are things that can be, and will be, fixed though. If you like games like Monster Hunter and don’t mind a bit of a grind, than Dauntless is something you should check out. It being free and on virtually every platform with a linked account across each of ’em, there really isn’t much risk for just popping in. You may just find a new favorite like I did!

You can check the game out in more detail on the Dauntless website. If you would like to play with me I am available sporadically on the weekend. The game has crossplatform play, so even if you aren’t on PS4, we can play together. Let me know in the comments if you want to add me or send me a private message on my Twitter (@JS_Reviews) so we can get that sorted.

Let me know how you’ve been enjoying Dauntless and if I convinced you to check it out. Even if you hate the game, I’d love to hear why. If you want to support my writing here please consider a donation by hitting the Ko-fi button below. Thanks for taking the time out of your busy day to read and have a good one!