Recently I Gave Both of These a Watch and…

When it comes to reviewing Netflix “anime” adaptations, I’m no stranger. Housing some of the best titles I’ve ever watched right alongside some of the worst I’ve ever seen, their track record is spotty at best. That’s why these two recent titles, Yasuke and Trese are worth talking about. On the surface, both 6 episode series don’t have a lot in common. They are radically different stories, but at the end of the day, they share almost the exact same issues. They both avoid playing into their strengths, what make them unique, in favor of telling bland, straightforward stories.

A Brief Overview of Yasuke

Let’s start off by quickly explaining each show individually. I’ll start with Yasuke since there isn’t a ton to say about the actual story itself. This anime’s story centers (kind of) on the titular Yasuke, a real life figure who’s actually quite interesting, but takes a fictionalized approach. The world is filled with magic and technology well beyond what anyone would consider realistic. While it’s true that the story follows Yasuke, it is more about his quest to aid a young girl with coming to terms with her newly awaked magical powers and the destiny she must realize to stop the world from ending

Like I said, it’s not a complicated story. If you’ve seen Avatar the Last Airbender, then you are familiar with the kind of story they are trying to tell here with the girl. When it comes to Yasuke himself, the more “historical” aspects are easily the best part of the show as opposed to the rather uninteresting events that occur in the “present” story. Whenever it did these flashback segments, I found myself wishing that was the show, because they were just that much better. In short, it’s a cliché experience with not a lot to offer. I wouldn’t really recommend it.

A Brief Overview of Trese

Comparatively, Trese is the more complicated story even if it shares some structural similarities. It too is about its titular character and her quest to realize some grand destiny. What makes this show unique is that it’s set in the Philippines and is rooted in their beliefs and culture… kind of. Our heroine takes on monster-of-the-week type plots with interwoven flashbacks to the past that slowly connect all of the events of its narrative together for a good enough conclusion at the end of its run, while keeping itself open for more in the future.

Trese acts as an arbiter of sorts, keeping peace between the monsters and humans. It too is fairly straightforward and cliché in terms of how it decides to present its moment-to-moment stories. However, it is the better experience of the two, if only by a small margin. I wouldn’t really recommend it, but there’s more promise in this one at least.

This finally brings us to the core of the article, the actual problems these two titles share. You might of caught a glimpse of it, but both shows fail to deliver on their unique qualities in favor of telling stories that you have no doubt heard before. Now, there’s nothing wrong with sticking to tried and true methods of storytelling, but in both Yasuke and Trese’s case, this is done at a pretty obvious detriment to its stronger qualities which is only made worse by how these more straightforward plot points are integrated. Let’s look at some examples from each series so you can get a more clear idea of what I’m talking about.

In Yasuke I mentioned previously that when the show focused on his past, the show was at its most interesting. This is because the show felt more like a historical drama following real figures like Nobunaga. There were some fantasy elements, but they were far lighter than where the show ultimately goes. Since Yasuke is based on an actual person, an African slave turned samurai, and a figure I can all but guarantee most people aren’t familiar with, that’s already enough for the show to tell an interesting story. It’s true that not a ton is known about this man from a historical perspective, though the anime did make an attempt to highlight some recorded events, the extent to which this is pushed aside in favor of something completely unrelated is disappointing as it detracts from the original premise. By the end, Yasuke himself doesn’t really matter.

Instead, what the show ends up being is a bunch of loosely connected pop culture references and plotlines that shove away its titular character. It’s as if Yasuke was afraid that its story couldn’t be carried by a figure who, by all accounts, sounds pretty badass. So forgive me that I didn’t love how Saki was basically the Avatar, or the time when they tried to have their “my cabbages” moment to drive the point home, or how the introductory villain is just so cartoonishly evil that when he gets what’s coming, it’s so on the nose and unironically dumb that you can’t help but to laugh. This doesn’t even mention the “Claptrap” robot character that’s cracking “jokes” every second it’s on screen… In short, it just doesn’t work.

Looking at Trese we can see the same kinds of issues. We have a strong female protagonist who lives in the Philippines, which has a deep culture and plenty of unique lore to pull on. Can you guess what it doesn’t do though? While it certainly has these elements from time-to-time, you are going to see werewolves, zombies, and a lot of other familiar concepts. To this series’ credit,  I should note that there were clear occasions where the show attempted to have these more unique perspectives, speaking from an American point of view, where one could feasibly learn about another culture, but they were so brief or unexplained, that they didn’t resonate in any real way. So is there some culture barrier here? Yeah, but that just makes my next point worse…

You see this really wouldn’t be a big problem if this show also didn’t split itself into a past and present timeline situation. However, since it does do this, there’s a pretty big missed opportunity to delve into these more Philippian concepts. Trese starts as a child, learning about magic and all the supernatural creatures of the world, which is a great opportunity for its audience to do the same. Instead, the show focuses solely on character relationships meant to bolster the anime’s conclusion, but instead accidently retroactively weakens it. 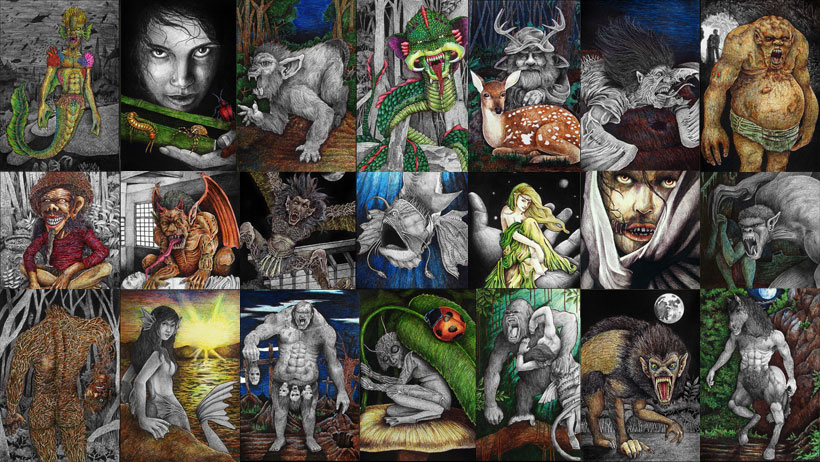 You see some of these in the show, but just look at only the mere snippet of interesting things that could have been featured

It doesn’t help that, like Yasuke, the show constantly has these dumb jokes and over-the-top villainess moments that make taking any of it seriously difficult. As an aside, it’s also absurd to think that the supernatural and human world are “separate” in this universe given how much spectacle all the baddies create, how completely unsubtle they are about being inhuman beings.

If it helps, Trese is at least watchable in comparison. The characters are a lot more likable and the conflicts are more interesting. Still, it’s astounding to me that both series fall into the same kind of pit traps and I think I can tell you why that’s the case. Remember, both shows are only a brief 6 episodes.

Alright, so this section is kind of hyperbolic in regards to Netflix, because in reality this is a trend in the greater anime production space. You may have recently seen on Twitter or the various anime news sites that KADOKAWA plans to create at least 40 anime a year moving forward, an obscene number. For reference most studios were barely breaking the 30’s, and even then, the industry is already at an unsustainable point. So what is the solution?

Well the most obvious solution is to just reduce the number of episodes per season of show you are producing. That comes with the benefit that studios can take on more projects with the same manpower, while saving production committees more money. While I chose to highlight these two series in particular, this doesn’t even mention some other trends Netflix in particular seems to be pushing, which is “moving manga” style animation, which is to say, virtually none, largely relying on stills (cheaper to produce) with quality voice acting.

To me, this trend is disturbing on multiple fronts as it’s done with the claim that this is “for anime fans”. Anime is doing better than ever! So that means we obviously need to churn out more-and-more…. right? It turns the medium into a question of quantity over quality. Here’s 6 episodes of a show that you’ll probably never see again, and by the way, we didn’t really put our best effort forward because we had to do another 40 just like it.

The industry is overworked, underpaid, and frankly oversaturated. Every season more shows come out than any one person can realistically keep up with, and half the time, those shows end up being total flops. Or even when they are good, you hear stories about production problems, health issues for the staff, it doesn’t take much searching to find that even in last season’s Wonder Egg Priority. Fans notice this stuff, I can promise you that, and while I can say we all want more cool stuff, nobody really wants it at the sacrifice of actual human lives or to the quality of the end product itself, because when it’s gone that far, what’s the point?

I hope you enjoyed today’s discussion on a few Netflix titles and the current state of the anime industry. I’d love to hear your thoughts on the show’s mentioned here as well as my concluding statements in the comments below. If you enjoyed this article, please consider a donation via the provided buttons below. Thanks for reading, and see you next time!