This is the fourth instalment of the “Anime X-Change Project” reviews. If you don’t know what that is, be sure to check out all the info here from an earlier post. For this one @InfiniteZenith suggested Sound of the Sky which someone had once told me was “K-on! without a soul”, well there is a Rio… Mio… hmmm, suspicious. All jokes aside, this anime is more properly akin to Girls’ Last Tour with a dose of Violet Evergarden. If that sounds like a winning combo, that’s because it (mostly) is.

What is Sound of the Sky?

Longing to learn the trumpet after a chance encounter with a military member as a child, Kanata Sorami joins the military herself as soon as she’s able. She soon finds herself stationed in “The Clocktower Fortress”, home of the 1121st platoon. It’s a small peaceful town located on the far edge of the war front, supplies are low, and the only real mission they have is to guard no man’s land. That’s OK though! That just means there’s lots of time for Kanata to learn trumpet from Rio Kazumiya.

At first glance this show really does invite the K-on! comparisons. This show’s Kanata is to K-on!’s Yui, right down to her incredible ear. She’s also clumsy and kind of a ditz. The dynamic of the other girls is also very similar, with the slice of life elements only further asking for this comparison to be made. However, that’s really as far as you can take this line of thinking.

When you look beyond the surface, what you are actually left with is a show with a lot more meat than you’d likely expect. I’ll be looking at the show through various lens as indicated in my opening paragraph to demonstrate this along with discussing the show itself in more detail at the end. So with that said, how does it measure up?

When we watched and discussed Girls’ Last Tour for season 4 of #anitwitwatches, one point you’d see come up a lot was how the world building was organically interwoven with the narrative. This was among the more engaging elements of that story, and an aspect that allowed the anime to stick out. The same can be said for Sound of the Sky, even if it isn’t the main focus of the series itself. 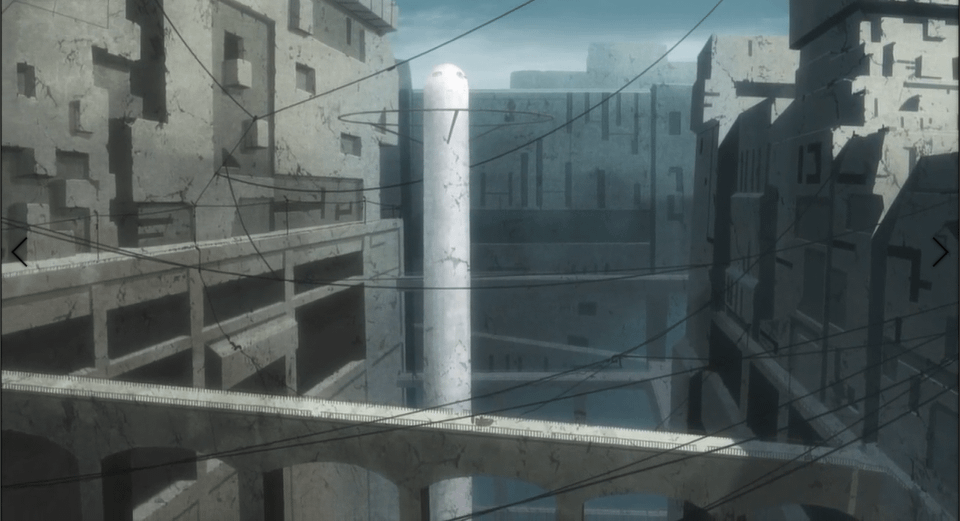 There is a big difference beyond the focus though, and that’s the characters and how they interact. In Girls’ Last Tour, you rarely see anyone beyond the two main girls which leads to a lonely and isolated feeling in the show. It also hurts the series because there often times isn’t enough substance to carry all of its ideas totally through. Don’t get me wrong the show is worth the watch, but it’s a common complaint.

Conversely, the world of Sound of the Sky is vibrant and alive. In that regard, it has a massive leg up on the other series. However, the world details are not neglected for this sake either. Both series explore a world after a cataclysmic event and are revenged by war. It’s hard not to draw a comparison there.

Finally, there’s one other big point of difference for the two series. Girls’ Last Tour is a more introspective philosophy piece whereas Sound of the Sky places focus on personal growth and healing. At least for me, I prefer the combination of the latter to the former, which takes me to my next point.

Of the many themes present in Violet Evergarden, one of its most powerful can be seen in its portrayal of war and how it impacts not only civilians, but those who do the actual fighting. There is an amazing seen where Violet is told that she is on fire for all of the things she’s done in the war, but she simply doesn’t realize it yet. I can’t think of anything more relevant to Sound of the Sky in terms of themes.

Simultaneously, the show also demonstrates growth in its titular character and how they move beyond their past. The same can be said for the characters here in Sound of the Sky. While Violet Evergarden is a much more pointed story in this respect, the impact can still be felt here and is no less valuable as a result. To fully explain this point, let me tell you a story…

A long time ago, a winged demon came down to live at the bottom of a valley. The demon would shake the earth as it spewed fire, causing the people to suffer. One day he kidnapped the maidens who lived in a fort, locking them in an underground labyrinth. The girls, however, refused to give up, and called to each other with golden horns given to them by the Lord. Upon escaping the labyrinth, they gained aid from an enormous spider and defeated the demon, taking its head. Once they’d done so, it began to spew flame everywhere. If nothing would have been done, the town above would be reduced to ashes. In order to keep the flames at bay, the maidens embraced the demon’s head, each in turn. Everyday the villagers would throw water on the maiden with the flaming head. Eventually a year passed and the flames were finally put at rest.

This is the tale of the “Flame Maidens”, as told in episode one of Sound of the Sky. Each of the five girls that make up the principal cast are an obvious parallel to this story. This is heavily reinforced by the first episode’s direction and is something I encourage you to watch. As the show progresses we slowly learn more about each of them and what lead them to The Clocktower Fortress. They are girls on fire, using each other to throw water upon themselves in order to escape past trauma.

Beneath all of the slice of life elements, this is the core of the show, what it’s actually about. Overcoming one’s past and healing, being able to move forward with others. The Flame Maidens’ tale is one of self-sacrifice, that makes it seem like people need to weather the proverbial storm alone, but he show rejects this notion, by demonstrating that by relying on others is the far better solution.

Furthering the reinforcement of this idea is the show’s use of “Amazing Grace”. These girls all share a common thread, being brought together through the power of music, specifically this song. For those who do not know, “Amazing Grace” is a song about salvation, and as I’m sure you can see, is an obvious pick with these themes in mind.

Sound of the Sky can be somewhat overbearing with its repetitious use of this specific song, but it clearly demonstrates without any room for doubt the power of music. Even the show’s finale relies on this very power in order to resolve the main conflict. It’s only by the girls coming together and putting their faith in each other are they able to overcome not only their own trauma, but help guide others as well.

In the end, the tale of the Flame Maidens in episode one is shown to be incorrect. There is no beauty in self-sacrifice as that tale suggests. Instead its original tale is as follows:

Many years ago, God sent an angel to punish the world. The angel was wounded and set its wings to rest, at a western-end town. It was the maidens, who lived in the city’s fortress, that saved him. He was sent to destroy them, but they took pity on his wounds. Gaining the aid of a giant spider, they gave the angel refuge at the bottom of the valley. Each, in turn, embraced the angel’s neck, to keep the blood from spilling out. In return, he gave them a golden horn. Eventually, the townsfolk discovered the angel. They set fire to the valley, burning the maidens and taking the angel’s head. The legend says that then armies of angels appeared, covering the sky. But then a miracle occurred. A glorious sound filled the air, and the angels left. The last maiden used her remaining breath to sound the golden horn.

If you want to check out the previous Anime X-Change review, you can read my review of Mo Dao Zu Shi here. Let me know your thoughts on Sound of the Sky in the comments below as I’d love to hear your thoughts. If you enjoyed this review and want to support projects like these then please consider a donation via the buttons below. Thanks for reading and see you again soon!

6 thoughts on “#Animexchange – Sound of the Sky”