Went in For the Meme…

If you weren’t to read the synopsis for WorldEnd and just look at its promotional images, you’d know the show is likely about an orphanage full of little girls and not much else. There’s some floating sky island things, so maybe a slice of life fantasy story. The only extra info I had was that this was also a father-daughter adjacent story which really seemed to be catering towards a more targeted demographic, but it’s not like that’s ever stopped me before. However, several people kept telling me to watch it so I finally did and, yeah, the show goes beyond surface expectations.

What you are actually getting is more akin to a Shakespearian tragedy centered on a romance between Willem Kmetsch and Chtholly. Having had a chance encounter with the young girl, he is surprised to see her again when accepting a military job to guard a weapon’s warehouse. The weird part is the warehouse looks more like an orphanage for young girls of all ages, not a single weapon in sight. That’s when he learns that the girls themselves are the weapons. 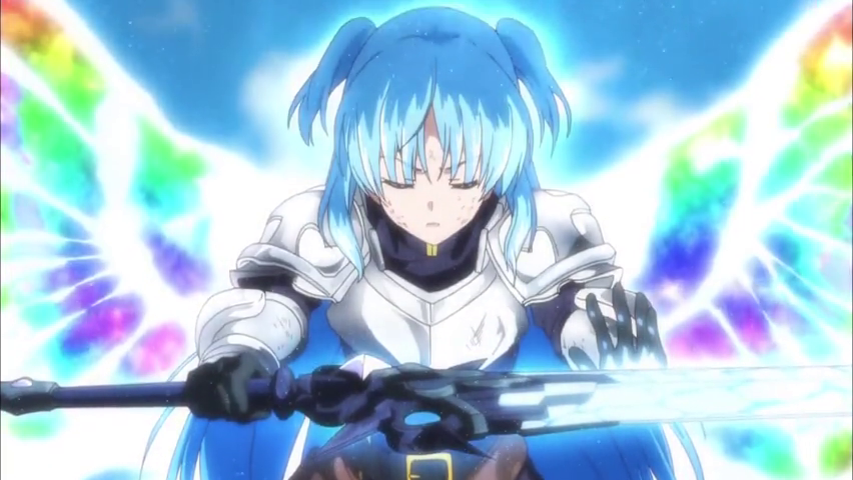 It’s a pretty cliché setup but what keeps it compelling is Willem himself. WorldEnd is constantly peppering in flashbacks from his past paralleling his current life with what he used to have. It makes for great world building, pushing the narrative much further than the surface elements would initially have you believe.

There’s really two sides to Willem. You have the father figure side of him that cares for all the little girls like that relationship would imply. I should note that the show really likes to take jabs at Willem for his complete normal affection for these girls, which is never uncomfortable, but it does get kind of annoying due to the sheer frequency of it. On the one hand, the show is clearly aware that this show has a billion loli characters and that draws a certain crowd, so these statements are more targeted to the audience, but the actual on-screen portrayal is very normative and healthy which is why I found it so annoying.

The other side to Willem is the guy with the tragic past who already loved and lost once, fighting his feelings for Chtholly. He uses the excuse that she’s one of the girls he’s meant to care for as a way to distance his feelings, and while this might sound more problematic to some than it is, the show is very explicit about WorldEnd being about their inevitable relationship, what that actually entails, you’ll have to watch for yourself.

For me though, I was just genuinely into the structure of the narrative. I loved having the lore and plot slowly pieced together through its characters as the story progressed. As I said, it made the show a lot more interesting. I’m not just talking about Willem here either, because several of the characters bring in their own contextualizing stories as well.

Ithea is a really good example of this. I don’t want to spoil her story, but when something starts happening to Chtholly, she confides in her a secret that not only informs the narrative moving forward, but recontextualizes her entire character since her introduction. That’s the kind of stuff I’m talking about when I say the show brought more to the table.

While you could certainly say that WorldEnd is exactly what it looks like (I won’t lie, it is), the fact that it bothers with having a compelling narrative that explores several interesting concepts successfully is what makes this one stick out. Compared to other father-daughter shows, I’d say this one barely counts, but as an action show with its slices of life and heaps of tragedy, it delivers. In any case, it has my full recommendation.

What did you think of WorldEnd and it’s absurdly long title? Did it bring more to the table than you expected or was it a disappointment? Let me hear your thoughts in the comments below. If you like the work I’m doing here please consider becoming a Patron or making a one-time donation to my Ko-fi so I can keep doing stuff like this. Thanks for reading, and see you next time!

2 thoughts on “WorldEnd: What do you do at the end of the world? Are you busy? Will you save us? – Bringing More to the Table”