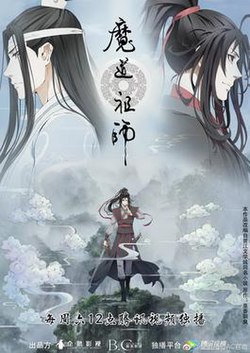 For my first Chinese animation I watched Uncharted Walker in 2020. It was a very interesting experience, if not refreshing for how it differed than that of the Japanese anime I typically cover here. Along with the differences, it was fun to see the similarities as well. Unfortunately, this first attempt was a fairly mixed bag that had me put other Chinese titles on hold in favor of staying course with my usual content.

Today, I’ve finally circled back to checking out Mo Dao Zu Shi, a title based on a popular book series of the same name. This was one I actually wanted to watch anyway (along with another title you’ll see from me later in this series *hint, hint*), and I can confidently say my faith in Chinese productions have been fully restored.

Unlike most other anime, this one decided to go for a more unique episode count of 15 episodes for its first season. This immediately grabs my attention at least as it implies the story is confident on its ability to deliver with just a few extra episodes from the normal 12 or 13 count for a single core show. To that end, the show mostly delivers.

I want to get the worst parts of the series out of the way first because the rest of the show really delivers. I don’t want to oversell anything and the flaws this series have are worth noting. Firstly, in 15 episodes, the story simply doesn’t end in a great spot. A majority of the story is spent in a flashback leading up to current events the show opens with. The journey is a good one, at times even great, but when the dust settles I couldn’t help but think, “that’s it?”.

Thankfully a second 8 episode season does exist but for this review I won’t be referring to it any further as I have yet to watch it at the time of writing. Will it fix this issue? I honestly don’t know. However, I do want to note that the story is ripe for continuation and assuming it stays course, could easily elevate the show’s standing.

Secondly, the show has some moments where the production looks, for lack of a better term, bad. I don’t mean that the show ever truly looks bad, it honestly could rival that of some big name Japanese studios such as Ufotable (Fate, Demon Slayer, etc…). When the show looks good, it looks good. That’s why when it doesn’t, you really notice it and it can pull you out of the experience. It’s a real shame because if it weren’t for this I think I’d ultimately be more positive on the experience instead of slightly impressed, but mostly just “satisfied” with he experience.

With all that said though, I really can’t complain too much about what Mo Dao Zu Shi accomplishes. There’s a healthy combination of cool ideas swirling around in this series, you have zombies, magical arts, and political drama. Additionally, there’s a solid story about human relationships and how the most well-intended of us can sometimes fall the hardest. This, of course, isn’t even everything the show has to offer, but I think it’s among the more compelling components.

Beyond that, the music for the show is extremely good. I’d even argue it rivals the stellar animation and almost steals the show itself. There’s a playful nostalgia to a majority of the tracks which is very fitting for the narrative. When the show is more horror leaning, the music takes on an eerie atmosphere that is more messy and chaotic. It strikes a great balance and makes for an excellent contrast.

I should also mention that this show’s mere existence is somewhat miraculous given the Chinese government’s strict “censorship” when it comes to homosexual content. Mo Dao Zu Shi is a gay title, and the fact it received an anime with multiple seasons, a third being on the way, is a positive step for proper representation and freedom of storytelling in the media for Chinese audiences. However, if I’m being totally honest, I can see why this one was ultimately approved:  it’s not that gay.

I’m not a big fan of Yaoi, and I knew this was going to be one such series when I came into it. I waited and waited for the show to deliver on this supposed romance, and while I can certainly see it eventually (maybe) going in that direction, I’d be lying to you if I felt any real connection on that front here at all.

For some folks, this is going to be a negative as the lack of romantic progress kind of goes against half the selling point of the show. For myself, I’m ultimately indifferent, but it meant the show was focusing more on the parts I found interesting which was a good thing. It’s pretty obvious who the main character is meant to pair off with, but their chemistry never felt more than that of close friends or brothers, and to that end I can see why this title wasn’t considered “problematic” by the Chinese government.

Now I can’t speak on the novels this story is based on, but I did read comments each episode and it felt like those who had read it were privy to relationship dynamics that I wasn’t. So take that how you will, I can’t really expand on it any further. My main point here is that the show didn’t really push any boundaries here and felt “safe”. I don’t think that’s a bad thing, but it was a minor let down given the hype on the supposed “historic” value Mo Dao Zu Shi delivered.

As my second ever Chinese anime, I can proudly say it matches, and even beats Japanese anime on several fronts. While there’s a lot of overlap, the differences will likely be refreshing to long-time viewers looking to experience something unique again. I recommend the show as a result and am curious enough to continue with second season myself.

You can view the entire series, with English subs, on the Tencent YouTube channel along with several other shows. The viewing experience is very good with few commercials. I hope you enjoy the ice cream ads baked into the show, how I wish there were more of them and that they were subbed! If that all sounds interesting to you, feel free to head on over and see what they all have to offer.

If you want to check out the previous Anime X-Change review, you can read my review of Time of Eve here. Let me know your thoughts on Mo Dao Zu Shi in the comments below as I’d love to hear your thoughts. If you enjoyed this review and want to support projects like these then please consider a donation via the buttons below. Thanks for reading and see you again soon!