Hitting (Almost) all the Right Notes

Before we dive into the review, this is the first in a series of reviews for the “Anime X-Change Project”. If you don’t know what that is, be sure to check out all the info here from an earlier post. My partner, @Animated_Andy recommended me White Album 2, which despite its name, is not actually a sequel. In his own words:

Based on your affinity for shows with emotional payoffs I thought this may be in your wheelhouse (You don't need/want to watch White Album beforehand. Unrelated stories). Enjoy!

So let’s see just how on the money he happened to be!

While it may be true that I didn’t need to watch White Album for this, I did at least look into the title as a point of reference. It certainly felt like I might be missing out on something after the first episode of White Album 2, but rest assured, you don’t. The only thing that really carries through from one title to the next is some theming and a song from which the franchise derives its name.

Both stories are visual novel adaptations that focus on the struggles of human relationships. It doesn’t quite go as far as School Days in terms of how far things go, and at least in the case of White Album 2, is depicted in a way that is far more nuanced. The comparison is an apt one though, however, while I know most folks did not enjoy School Days like I did, I do believe that White Album 2 is one many would connect with.

There’s pretty quickly the sense that things are going to go down a more dramatic and skewed route when starting this show, but the first half is something I’d say is closer to something like SNAFU or even K-On!. Our protagonist, Kitahara needs to save his light music club and blah, blah, blah.

In the first half he gathers up the main cast, primarily Kazusa, a top-notch pianist with a cold personality, and Setsuna, a popular girl who doesn’t really want the attention but loves to sing. With Kitahara on guitar, they can make their dreams of playing the titular “White Album” come true at the school festival.

Obviously the kicker is that the two girls fall for Kitahara, and for the first half it really does have that SNAFU feeling. Both girls know how the other one feels, but Kitahara is kind of out of the loop which is an important difference as this allows the show to skew to the School Days side of things in the second half. 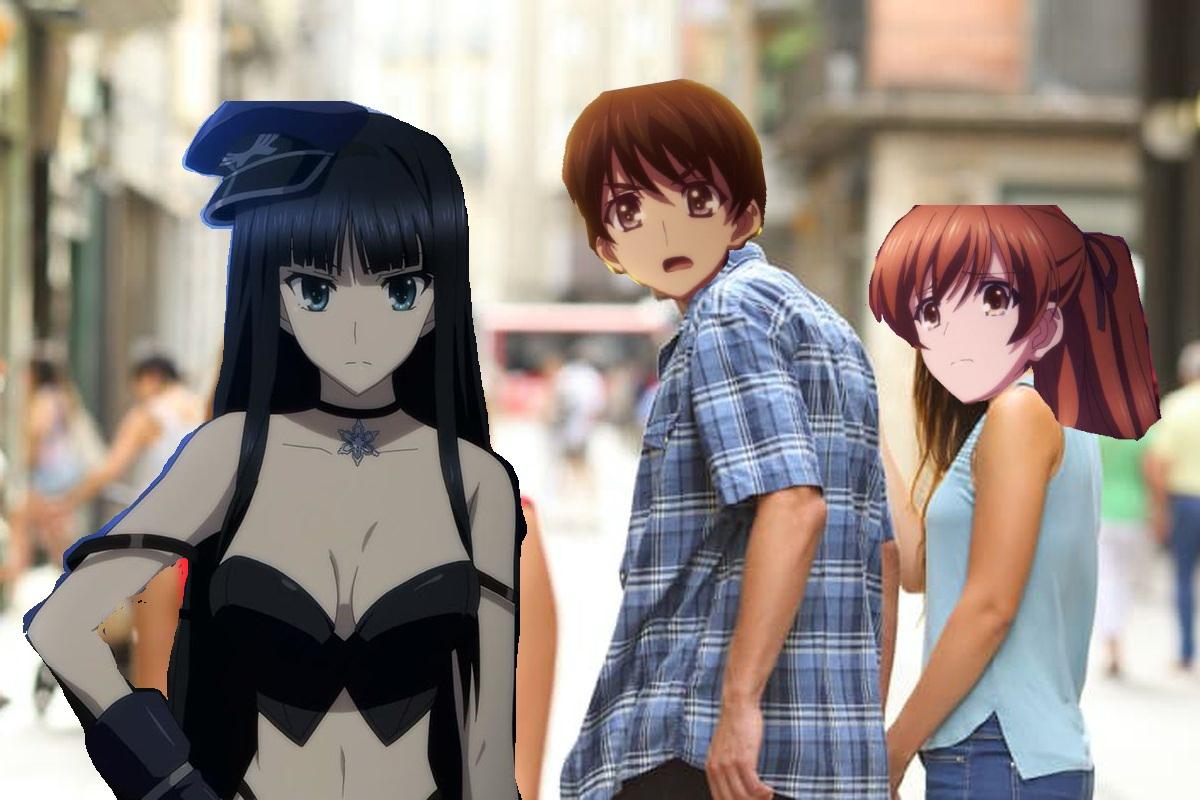 This meme was just too funny not to include, it’s not a spoiler at all

I’ve got to say, it’s an engaging watch as you see just how far things are going to go. I love that soap opera quality these kind of anime have, and White Album 2 is no exception. Since the show is about music, at least partially, that needs to deliver and it does.

Not only is the music largely good, it’s also integrated smartly within the series which lends itself perfectly for creating “soap opera moments”. The big emotional music swells right before being cut off by some dramatic turn of events, and that sort of thing. Some might criticize the show for leaning so heavily on the limited tracks present, but keeping things limited to about 8 songs in total (some being stripped down instrumentals) fits thematically with the amateur band concept presented early in the story.

This is further reinforced by the OP and ED, which I don’t want to spoil in terms of how that all fits into the story. They bare both really good though and evoke the right things for starting and ending the series. A few times the ED is switched up, and most the time I wasn’t a fan of these but that comes down to personal preference.

While I’m speaking on more technical things, I should mention that the subtitles are this weird orange and white which I’ve never seen done before. It was, to say the least, an interesting choice. I’m mentioning it simply as it was novel, but it was somewhat distracting for the first few episodes just because they really stick out.

These are minor blemishes though, and I’d say that White Album 2 doesn’t really have a lot wrong with it in any department. You can argue it sends the wrong message with how the cheating is handled, though I can’t help but feel this lies in a grey area that is not only justified, but decently realistic. Personally, I found minor issue with the pacing in some later episodes, and the ending doesn’t hit as hard as I wanted but it’s a solid product that tells the kind of stories I tend to really enjoy for whatever reason.

Even without this specific narrative interest, I do believe that White Album 2 is worth watching when it comes to a more general audience. It has just the right level of things without going overboard in a way that would make folks uncomfortable. At absolute worst, it’s got some great music and solid production which is always a great thing to see in visual novel adaptations especially. Overall, it just falls short of hitting all the right notes for me but it was by no means a bad recommendation from Andy, he delivered a real winner this time!

That’ll do it for the first review in the Anime X-Change Project series, be sure to keep an eye out for the next one! Let me know your thoughts on White Album 2, or its predecessor White Album in the comments below as I’d love to hear your thoughts. If you enjoyed this review and/or want to support projects like these than please consider a donation via the buttons below. Thanks for reading and see you again soon!