The End of a Saga

Ever since the dropping of the atomic bombs in Japan, 1945 the country has never been the same. It’s an event that has left a permanent scar that permeated the culture, which is why nuclear disaster is such a prevalent theme in Japanese media, especially anime. Today’s final ABC review explores the impact of the bombings and offers a whole lot more to say on rather divisive subjects. From the brilliant mind of Shinichiro Watanabe, I present to you Zankyou no Terror.

Watanabe, who you may better recognize for shows like Cowboy Bebop and Samurai Champloo, has always been pushing what the animated medium can offer. He has a certain “Western” approach, which really should be read as global, that allows him to tell stories that are still uniquely Japanese but easily appreciated by others. Zankyou no Terror is no exception to this.

There are several reasons why I really enjoyed this anime despite its general reception being less than great. My first reason is actually one of the more contentious parts of the show, that being the subject matter. It’s about terrorist and nuclear bombings, a subject that is surely sensitive to everyone, not just the Japanese people. Secondly, I love that the framing of the show is that of a police procedural, one of my favorite genres of media. Finally, the show has something to say, and it does so with care but without neglecting spectacle in its presentation. 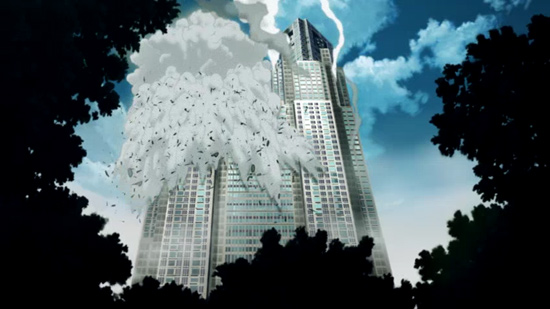 The sensational plot this anime has seems to become increasingly relevant each year since the show came out. This actually isn’t my first time attempting to write about this series, as the first time was actually after several terrorist attacks in real life. At the time, I wasn’t able to fully formulate my thoughts but now I think I can better articulate them. Bad stuff happens, and they happen a lot. There are a lot of things in the “darkness”, as this show would put it, that need to be illuminated.

Zankyou no Terror is ultimately a story about hope for the victims of these hidden atrocities. The message being that with enough noise, anything can be brought into the light so to speak. While this maybe doesn’t help existing victims, it can help prevent future cases. Is terrorism necessarily the right answer for such radical change in societal views? The show argues that it can be, and while I don’t really agree with that extreme, even rather benign acts of protest are touted as domestic terrorism by some here in the US.

To that end, even though Zankyou no Terror is a distinctly Japanese in its brand of tragedy, I think that anyone can really understand what it’s going for. It’s rare for something so rooted in a certain time and culture to be so easily understood by a global audience, and if anything, I want to applaud the show for daring to even tackle such a weighty subject at all.

Perhaps that’s a fairly dramatic statement in and of itself, but it’s just one piece of what this anime ultimately has to offer because it doesn’t stop here with the things it has to say. There’s clear commentary on abusive and abusive relationships, the dilemma that arises in getting closer to others at the risk of hurting one’s self, and a few others. It’s a tight package in that respect, and each topic is handled with some level of finesse for the most part.

What makes the show engaging, as I’d argue these concepts aren’t exactly revolutionary or new, is in its presentation. Who doesn’t want to watch a brilliant detective play cat-and-mouse with a pair of terrorist? While you’d normally only see one side of the story, you see both play out concurrently throughout the anime’s 11 episodes. This allows you to sympathize with both positions and gives better perspective for why everything is happening.

Unfortunately, this balance is disruptive to a degree with the introduction of a character named Five. She has her own agenda that feeds back into the larger plot, but her actions are a bit crazy even for a narrative that has room for plenty of allowances. Personally, I don’t find her inclusion to be much of a detriment, her story does contribute in a meaningful way if you are paying attention, but I can see why a lot of people aren’t her biggest fan.

Overall, she actually gets a decent amount of screen time, more than I remember even. I’d normally accuse a show with such a short runtime of not giving a character like this enough time to integrate into the plot, but that really isn’t the case here. What can make her feel off for many is her motivations, with the big kicker being her story’s resolution.

At the end of the day, Zankyou no Terror is one of Watanabe’s least polished stories from a narrative standpoint. He still brings his signature style and the show really does look, sound, and even feel great most of the time. From the trailer above, I’d dare say it’s almost haunting even. In spite of this being among his weakest works, I’d argue it’s still damn good and well worth your time. It’ll give you a few things to think about, perhaps even challenging your world views, and that’s something I think anime can afford to do.

I hope you have enjoyed this 4+ year journey for Anime ABC’s. When I started this series on a whim, I never imagined it would be as successful as it was. Thank you so much for reading and supporting my work along the way. If you would like to help me do more epic projects like this (and spoilers, this won’t be the last you hear of this sort of thing) please consider a donation via the buttons below. Until next time!