I’m really not sure what possessed me to try out the recently released Eternal Return:  Black Survival, a free to play battle royale MOBA hybrid. I’m not a huge fan of either types of games save for a select few titles in each respective genre. However, I gave it a go on a whim and have now invested about 10 hours into the game itself. The experience is one that is simultaneously frustrating, but keeps me coming back for more. Let’s dive right into why I think Eternal Return is worth your time.

First impressions jumping into the game is that in spite of the large amounts of information in some of the menus, it’s fairly obvious where you need to navigate. Starting with the tutorial, where you should head straight away. The main reason for this, beyond learning the bare minimum for playing the game, is for the two free characters and unlock currency for additional characters.

An earlier example of the menus, but they look very similar now. The main changes are that some things are cleaner looking.

You’ll probably breeze through the tutorials, and then you’ll be ready for a game, right? No. This is actually the one thing that I think is holding Eternal Return back the hardest, the tutorials are pretty awful. It’s true you’ll learn the bare minimum to hop into a live match, but the game is actually fairly nuanced, there’s a lot of “hidden” rules and mechanics that just aren’t mentioned.

For example, the tutorial stresses fairly hard that items with a yellow triangle are things you should prioritize when exploring the world. These items will be used to craft better ones, thus leveling up your character both literally and in terms of power. In this way it blends the MOBA and battle royale elements rather well. Unfortunately, it’s really easy to tunnel vision on this and miss out on opportunities for better gear or get locked out of needed materials, causing you to fall behind. 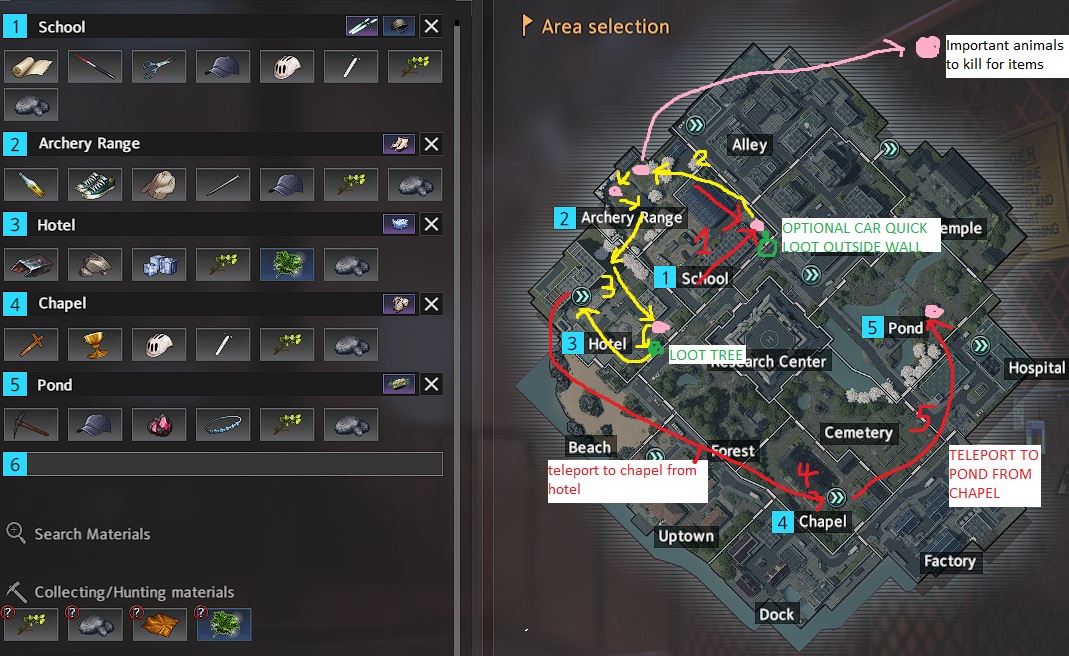 Each character has a recommended route for materials and you kind of just need to memorize on how to execute on it. For a new player this is very overwhelming and puts you at a distinct disadvantaged vs more experienced players.

The other thing the tutorial doesn’t really prime you for is how important it is that you don’t hyper focus on the crafting. It really makes it seem that’s your primarily objective, as getting your build finished does allow you to handle tougher opponents, but you really need to spread your attention between the trash mobs on the map as well as general “exploration” of the map.

As a result of this, the game has a very steep learning curve. For it’s simplicity in what you are actually doing, the amount of shear stuff you need to be acquainted with can feel somewhat overwhelming. It’s not as crazy as League or DOTA, but even still, it’s far and away more than my favorite MOBA, Heroes of the Storm in terms of complexity in its systems.

As a general rule of thumb, here’s some useful tips I’ve figured out along the way:

These tips come from my play experience and a few videos I’ve used as reference to learn the game. It’s still very new, only being released back in October 2020, so you really do just need to spend some time with it in order to learn what works for you best.

My play experience with the game has been on a steady rise in enjoyment. When I first started it was frustrating, I’d constantly do poorly in matches and I couldn’t figure out why. It wasn’t until I started to figure out the tips I mentioned above that I began to slowly trend to the top of the ranks each match.

I started with solo games, and it’s probably my least favorite way to play the game. It’s you vs 18 other folks and while that has its appeal, many of the characters are clearly built for team based play. You have support, tank, dps, etc… and if you are rocking your favorite support/healer into a solo queue, you are going to have a bad time.

I moved to duo games next, where you join with a buddy, and that vastly improved the game. Suddenly the roles for characters mattered and you could implement some basic strategy. I was even able to win a game which felt super rewarding, like I had started to understand how to really play the game properly.

Finally, I’ve been able to try squad play, where you queue up with 2 teammates, and that’s easily my favorite. The reason being pretty much what I just outlined for duo play, everything matters way more and you are rewarded for team play.

That’s why I say Eternal Return:  Black Survival is a diamond in the very rough. It’s steep learning curve and frustrating initial start is going to be off putting for some players. Each character also requires a decent chunk of time to learn to play, and while you get two free characters and whoever is in free rotation at the time, there’s no way to just test all the characters out beforehand. You can do bot matches, but they are stupidly easy and not a good way to learn the game outside of material routes.

Still, with a little more polish and a little effort on the player side to understand the game, I see a lot of potential in this game. I’m certainly going to be sticking with it and would love to find more folks to play with. The community is still fairly small, so hopefully this article might encourage you to give the game a go. You can download the game for free right here on Steam.

That’s it for today’s review. Let me know if you are going to be trying out Eternal Return:  Black Survival. I’d also like to know your thoughts on a Battle Royale MOBA hybrid, as this is the first game of it’s kind that I’m aware of. If you enjoyed the article please consider a donation via the buttons below and as always, thanks for reading!