In the world of anime Gen Urobuchi is someone who needs no introduction. You might recognize him for such titles as Madoka Magica and Psycho-Pass, but his career actually goes a lot deeper than this. Last year I spent a ton of time researching and familiarizing myself with his creations for a review of Phantom: Requiem for a Phantom (which I recommend you give a look as I don’t want to retread that same information here), upon doing so, I was reminded of today’s focal point:  The Song of Saya.

Shortly after the release of the Phantom review, a cleaned up English re-release of The Song of Saya dropped in August 2019. I purchased the title intending on doing a Halloween review but I digress. Having experienced so much of this man’s career, I thought it would be interesting to look at one of his earlier works in context to everything else.

Now those who are familiar with Urobuchi’s work will note that Phantom of the Inferno, which I partially looked at for the aforementioned review, debuted in the year 2000 but did not receive a stronger international purchase until the 2010’s. This is not the case with The Song of Saya which debuted in 2003 but has had a cult following for some time.

There are several reasons for why The Song of Saya likely rose, and then maintained, cult status within the visual novel community. Some of them are a bit obvious, like the fact that Urobuchi is attached to the work and that it has been fairly easy to obtain a localized copy of, while other factors may only be more apparent to long-time visual novel players.

The Song of Saya is all of that but with a few twists. Primarily:

With these three factors working together on top of the more “obvious” ones listed above, it’s not hard to see why this might have a leg up on other titles. Saya has the benefit of being the brain child of a popular writer, focused on a topic he’s well versed in, and is extremely accessible both from a time and availability standpoint.

So What’s Saya About?

Medical student, Fuminori Sakisaka was in a horrible accident that resulted in the death of his family, and by all rights he should have died too. Unfortunately for him, an experimental treatment was able to grant him a miraculous recovery. When he awakens the world has turned into a hellish nightmare, the walls pulsating with sickening flesh and what were once human are now horrifying monsters. Of course, Fuminori knows this is all in his head, a side effect of the procedure, but it can’t help but drive him into a world of madness. Ready to end his life, that is when his salvation comes at last in the form of a young girl named Saya, the only “person” Fuminori can see as human. 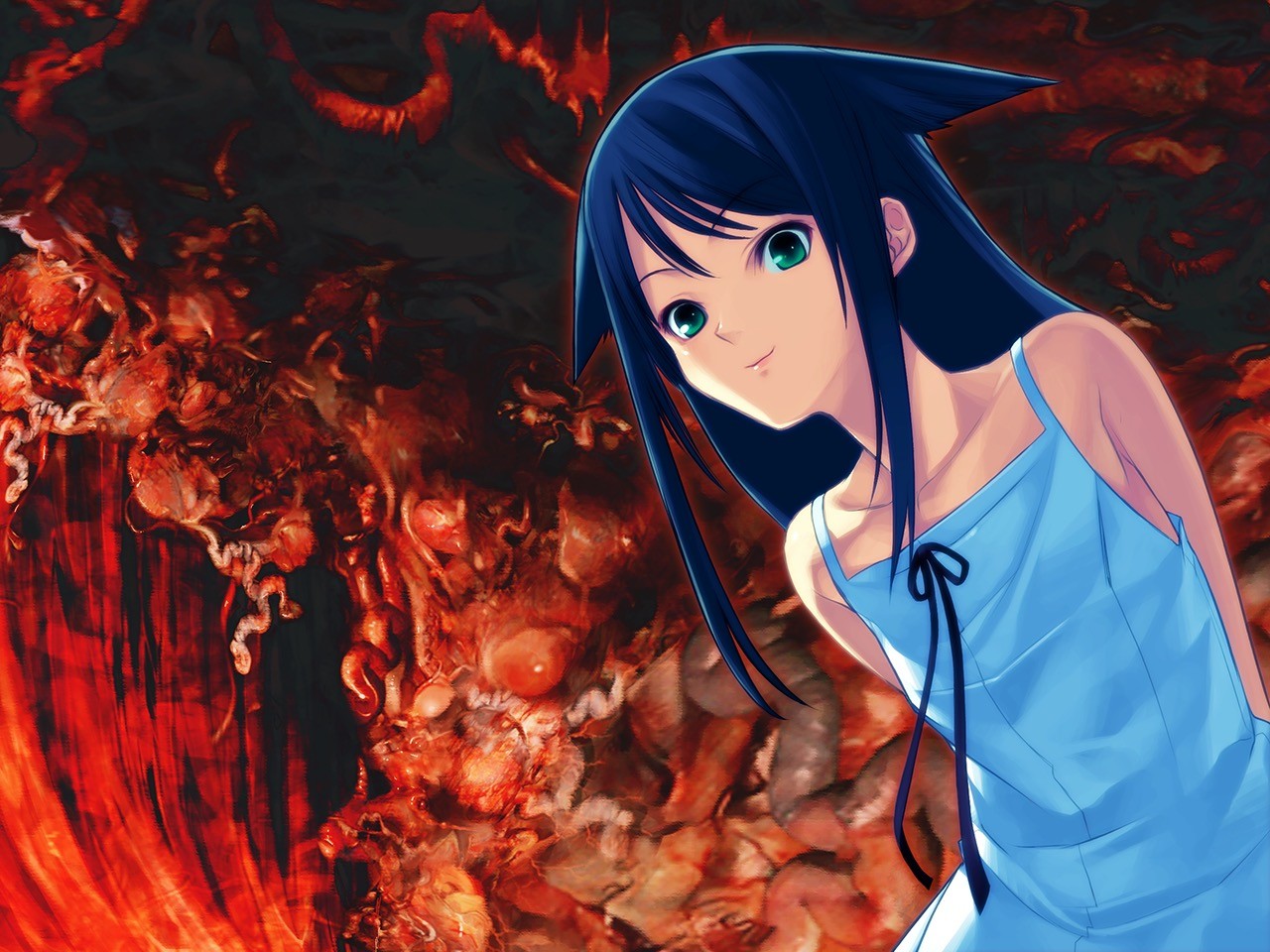 Naturally this begs the question, if everything that was once normal is this alien and disgusting hellscape, then what does that make Saya? Where did she come from? And perhaps even more pressing, what exactly is she after?

Reminiscent of cult horror films such as Invasion of the Body Snatchers, The Blob, and others, the story being told in The Song of Saya achieves its horror through the mystery of the unknown. We never really see Saya for what she is, and much of the stories most horrific moments are left to the reader’s imagination.

This, naturally, makes sense given the creator notes that become available to the player upon completion of the game. It was exactly what they were going for, paying homage to these older films while still doing so with their own twists. In a lot of ways this story is everything you’ll expect it to be but packaged in an engaging fashion that offers enough variance where it counts.

Thoughts on the Game Proper

If I’m being completely honest, I was very conflicted with The Song of Saya for a majority of my playtime. While this is obviously the work of Urobuchi, it also feels like it often falls victim to keeping with what it draws inspiration from. It’s not a bad thing, the visual novel is very upfront about this, but it lacked a certain spark that even his older work, such as Phantom had.

Don’t get me wrong though, the story is extremely engaging and easily drew me into its atmosphere, just when it came to what I expect from Urobuchi, it felt like there was less of himself as a creator in this particular work. Still, you’ll find many of his hallmarks such as, but not limited to:  body horror, commentary on humankind, etc… 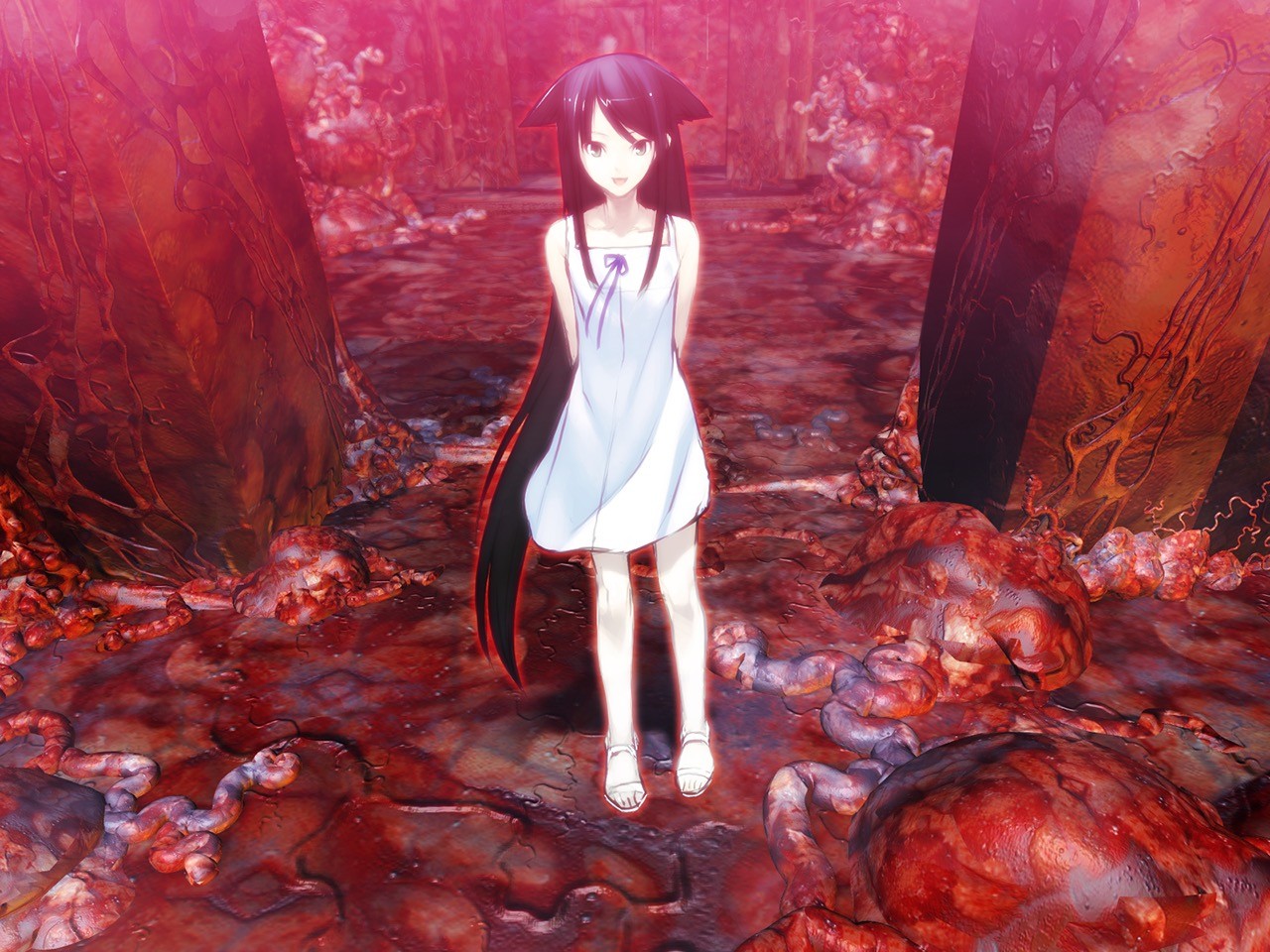 There is some 3D work in this game, wasn’t sure where or how to mention that, so enjoy an image

To Saya’s credit, the game does offer several ways to curate your experience so that you don’t have to see the explicit images. Unfortunately, you’ll still have to read the rather visceral descriptions, but if that’s something that bothers you please do be aware that the content is there but you have options to make it a better experience for yourself if desired.

I can practically hear you asking then, why didn’t I censor these scenes if the game provided those settings? To that I reply, I simply wanted to give a review of the unfiltered product. As an aside, I think that is important as I figure most people will play it this way, and that’s totally fine. This aspect wasn’t for me, but I get why it’s there and how some folks might even enjoy it.

Otherwise, my only complaints would have to be with the three endings, or rather the potential ordering problem you might encounter. Without spoiling things, the endings ranked from best to worst are:

The problem was that I played the endings in this order:  2, 3, and then 1. If possible, you should really do them in reverse order, because otherwise the story feels a bit plain. The context of the other endings feed rather nicely into the true end, but you wouldn’t know that without somebody telling you in advance. Additionally, if you do the true end first, everything else will be underwhelming by comparison. I would have liked to see each of the endings be a bit more robust, or consistent in what they provide, but again, what’s there isn’t bad by any stretch.

Otherwise, I have to say, the true ending is absolutely stunning. The music and sound in this game is an absolute high point, and for whatever reason the illustration quality was almost otherworldly, seriously, it was really good all in concert. Any hesitation I had in giving this a recommendation completely vanished. It was better than it really had any right being, I genuinely felt emotions, even getting satisfied goosebumps. Can’t properly explain it, but it was worth the experience.

As for what I liked, pretty much everything else. The fact that it was a short read, and I could see all the endings was really fantastic. The atmosphere felt good, even when I got pulled out of things a bit by real life or the parts of the novel I wasn’t really into. Saya even has some decent humor between the horror, so there’s a good balance of buildup and release with bits for air along the way.

The Song of Saya was a solid experience that I would definitely recommend to people looking for an introduction to visual novels, horror lovers, or those who enjoy Urobuchi’s work. That said, it’s definitely not for everyone. It’s pretty gross, there are sensitive themes, and the lack of agency for most of the story is going to be a barrier for a lot of people. If you can look past it though, absolutely go for it!

You can find The Song of Saya on Steam (censored) for $14.99 or JAST for $19.99 if you want the uncensored version. If you want the “sexy” stuff, you probably want to splurge on the extra five bucks, otherwise the Steam version will be for you. I have the JAST version, and appreciate having it DRM-free on my machine, so there’s that too.

There’s more I could say about The Song of Saya, but I think that it’s best to leave those things for you to discover on your own. Let me know what your thoughts on the game are, especially if you don’t really play visual novels, or if you are a big fan of Urobuchi’s work. Thanks for taking the time to read, and as always, see you again soon!