Who is The Skull Man?

A rumor about a masked killer in Otomo City, a corrupt district of Japan where conspiracy and death are all too familiar, grabs the attention of a Tokyo reporter, Minagami Hayato. He’s soon joined by a young photographer, Kiriko Mamiya. At first, this seems like a fruitless effort but slowly the pieces begin to come into place and a deep conspiracy is revealed, but by then, it just may be too late. 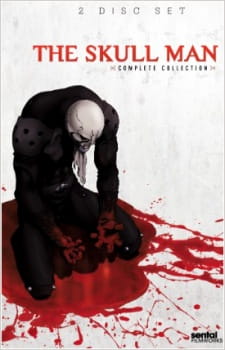 This is the central premise of The Skull Man, an anime that grabbed my attention thanks to its promotional poster. I couldn’t help but think that this would be a fun review for the Halloween season, and while the show’s move into the supernatural does push it into this category, I also find it difficult to recommend whole-heartedly.

Really, the series is very much a slow burn mystery that takes its time to deliver on everything. The supernatural elements are brought in fairly early, but the exploration, and consequences of those elements don’t come into play until the show’s conclusion. As a result, The Skull Man largely plays out like a crime noir, focusing on the relationship between the two leads, while adding in a few occasional flashy moments.

With all that being said, it checks off the boxes for this kind of story. We’ve got a suspicious cult, a web of deceit, a strange old man who seems to know too much and show up wherever it’s convenient, and that’s barely scratching the surface. When the show is in its more grounded state and playing out more like a crime drama, The Skull Man is truly the best it can be. This, however, can’t be said for the supernatural angles.

As the series enters the final act, the supernatural stuff takes center stage, marking the show’s decline in quality. Suddenly we have a ton of new characters, things escalate quickly into madness, and worst of all, things aren’t even left resolved when the dust settles.

This is what I mean when I say the show is difficult to recommend, which is a shame, because I generally did like this. I’m not a fan of how rushed the ending feels compared to the slow nature of the rest of The Skull Man, nor am I a fan of the sequel bait ending for something you know will never come. I can’t help but feel that had this ending been given the same attention to detail the rest of the series received, and a more resolute story (at least for the one being told here, it could still be left open for more) would have left this one feeling fairly solid.

Instead, all I can say is that I enjoyed The Skull Man for what it was but struggle to say it’s worth your time. Don’t get me wrong, it’s not a bad show, but I think it’ll leave folks wanting. If a deep conspiracy with decent payoffs is what you are after, it’ll deliver, just be aware that the rushed finale will probably leave a sour taste in your mouth. If you can stomach that, then consider giving it a watch, otherwise I’d recommend giving it a pass.

That’ll do it for this review of The Skull Man. What did you think of the series? Be sure to let me know in the comments. If you enjoy the work I’m doing here please consider making a donation via one of the methods below. Thanks again for reading and see you in the next one!

9 thoughts on “The Skull Man – A Slow Burn Mystery”