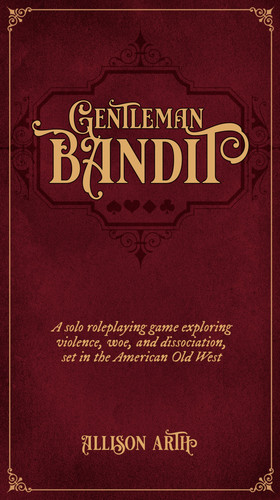 While I didn’t win “Fusion Fight“, I did enter it and wanted to share my experience with you regarding that contest. For it we were all tasked with writing a short story that blended two genres together in 500 words or less. So naturally I decided to do something a bit wacky and took a solo role-playing game to tell my tale. In Allision Arth’s game, The Gentleman Bandit, you play as the titular character and write a poem to leave behind at the scene of your latest crime. So let’s dive in and take a look at both the game, and the story it helped me to generate. 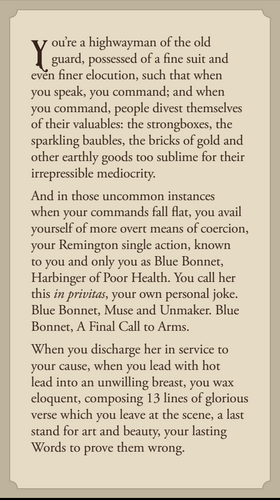 Playing the game is actually quite simple. You’ll need the rules which you can purchase at the link above, a deck of standard playing cards, and a way to record your game. That’s it, really simple!

The Gentleman Bandit plays by having you draw a playing card, consulting a chart based on the card to determine the motif and point of a line in a 13 line poem, and then tasks you with writing it. To aid you, the game comes with a handy vocabulary list and modifiers that can add a lot of spice to your poem.

Everything else included in the document is there to give you a sense of The Gentleman Bandit as a character and examples of play. In this way the document is fairly immersive and does an excellent job of conveying the tone of the game without forcing you into a rut of creating only one type of poem. Is the bandit a kind and caring man? A heinous killer? Or perhaps something between? Either way, it really is up to you to decide.

The beauty of Allison’s game is in its simplicity. While I struggle to really call this a “game”, especially without the use of the optional modifiers, it does work as a great writing tool. Which leads me to…

Some folks call me the Gentleman Bandit, but that’s just because they don’t know my name. Been called a monster, a villain, and even the dealer of death. A slew of unsavory descriptors from the shriveled minds of the masses culminating in a cruel, yet feeble epithet. To them, I’m the Devil himself.

And yet, they do not know me. The things I long for, the past that haunts me. All that remains of my capers is but a fragment of my soul, a calling card in which I explore the very nature of my deeds. If you are reading this, then may you pray God graces me with mercy as I carry onward into the vast, and empty night.

Morphed into this vile creature…

Adrift, I shan’t ever return.

And lo, I long to return.

But I know this dream to be false…

Vile deeds once righted my past,

Pressed onward by these bloody hands.

To call me loathsome is your right.

I have always been adrift. Alone.

Woebegone, my once bright future.

In the above I took the game and expanded on it for the sake of the contest I entered. The non-italicized portion of the story draws inspiration from the book’s text as context for the reader. Think of it as an internal monologue for our character, or perhaps even a personal journal entry. The second portion is the 13 line poem itself.

In my game I randomly rolled on the optional modifier table and got the result indicating each line needed to be 8 syllables or less. From there I drew my 13 cards using an online program that draws cards for you. While I didn’t think to record the cards drawn, I can illustrate an example of the kind of questions I was posed.

Let’s say I drew the 5 of hearts (something I’m sure I did do), I’d receive the following information:  A motif and a matter. In this case my motif, which is the theme of the line, would have been love. The matter, which is what this motif is addressing, or a question that’s to be answered was “What is your darkest truth?”.

So what you are really being asked here is:  What is your darkest truth concerning love?

As a player you take that question and write a line that addresses it in some way. It may not be a full answer, but it provides at least a hint to what it might be. You then build on this with a new card and repeat for the remaining lines. Remember, in my case I also had the additional restriction of syllable count to adhere to.

Unfortunately there is an issue with this process. There are only 4 suits, so depending on what cards you draw, you can have a poem that gets somewhat repetitive, especially when paired with same numbers. This happened in my above example, which made writing something that felt cohesive but not overly repetitious difficult.

The solution here is to just start over if it feels like this but I was committed to testing the quality of the game by using my first blind play as the basis for my short story entry for the Fusion Fight competition. The result was that I didn’t even get an honorable mention of the 7 total entrants. Does that mean the game is bad? No, by all means it clearly is a good foundation for something larger, but on its own it doesn’t provide enough substance. For the solo RPG crew, especially those of us focused on writing based games, this one isn’t worth the $7 price tag for the game, but for the inspiration and detail on the world it conjures, it’s likely worth it for those looking for writing material or a way to enhance an existing RPG.

You can purchase the game on Allison’s itch.io page linked here.

I hope you enjoyed my short story and play example of The Gentleman Bandit. There are a lot of great solo RPG’s out there in the world, a lot of indie ones like this, so I encourage you to go out and try some. If you’d like more recommendations and reviews of games like this please let me know in the comments below. Also, if you liked the story/review and want to support my efforts here I would greatly appreciate it if you became a monthly Patron or made a one-time donation by clicking the corresponding buttons below. Thanks again, and see you next time!