A Flawed, but Genuine Mystery

Today I’ll be looking at The Perfect Insider, a rare breed of anime that presents a singular locked room murder mystery to the viewer while telling a broader story beyond that as everything develops. If you guys have been following me for awhile, then you’d know from my Hyouka review that I love a good mystery. This begs the question, just how well does this show deliver on its 11 episode, one mystery premises?

Based on a 1996 novel of the same name, The Perfect Insider’s anime adaptation brings the story into the modern era, realizing its technological elements in a meaningful way without losing the core soul of the work. Fifteen years ago a girl murdered her parents, but she claims the murders were carried out by a doll. Ruled insane she was locked away on an island to carry out her work due to her genius brain, but today she is the one to have found herself murdered. No way in, and no way out. How are the two mysteries connected and what does the mysterious phrase, “everything becomes F” mean?

What makes this so rare is the fact that the show covers exactly one mystery, and what makes it all the more impressive is that it’s a locked room story. Usually when mystery works get adapted you get a compilation of sorts, where maybe one story takes up an arc (about 4 episodes). However, here, all but the final episode is dedicated to the mystery itself. To push it over he edge, it’s a genuine mystery that you can actually solve at home if you pay attention.

In regards to the mystery though, this is where my praise ends. While others who watched this alongside me were unable to fully solve the case, though some did get close, I was able to once again solve the case with relative ease. If you are adept at this sort of thing, experiencing a lot of mystery works because you enjoy solving the cases, I’d rank this one at a relatively low level. In short, it’s nothing all that complex, but the presentation of the mystery and what it ultimately is meant to convey is what salvages The Perfect Insider for me. 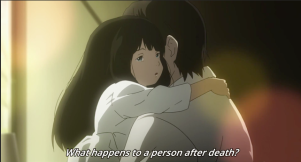 The real story is not the one about the murder. It’s a story of a young girl and her taboo relationship with her uncle. And yet it’s more, as it is also a story about a girl who lost her parents in a tragic accident at a young age. Finally, the story is also about a man who lies somewhere between, acting as a bridge between two worlds all for the sake of love.

Why am I writing this review this way? Simply put I want to convey the atmosphere of The Perfect Insider. It’s a show that wants you to feel smart, and as such, is cryptic in its delivery, yet easily understood. The ideas put forth by the show are simple and yet they are immensely dense. At the heart of it all this is a story about the meaning of love, what it means to live, and the pitfalls we can all succumb to.

Of course, this runs the risk of making the series sound far too obtuse. I assure you that this is not actually the case. Everything is presented with care to keep its audience engaged, even more basic shot-reverse-shot scenes of dialog are varied. Then there are scenes of absolute stunning quality, but they don’t ever feel out of place.

To this end, The Perfect Insider provides a unique viewing experience. Even if this kind of thing isn’t your usual cup of tea, there is something to gain from watching. The very nature of the story is highly interpretive despite spelling everything out by its end, a true testament to the quality of the writing in some ways. So it’s easy for me to recommend, despite the issues it has, which are far from few.

One of the biggest issues is in said presentation. It’s very dialog heavy, and if you are not a fan of reading subtitles this will be an excruciating watch. Even if you are comfortable with that, one glance away from the screen and you will have missed quite a bit of critical information, even in the scenes where nothing of real importance seems to be going on. This anime really could have done well with a dub.

Yet, I can see why this show did not receive one. Due to how The Perfect Insider is setup, the story doesn’t really become apparent until around episode 3. To make things worse, it didn’t do well both as seasonal viewing material when it first aired and as a physical product for later distribution. The mere fact that you can easily view it, much less get your hands on a physical copy, is kind of crazy.

While I am on the topic though, I should give praise to one scene in particular as it’s something that stands out as the sort of thing that makes the show worthy of a watch alone for that. The scene I’m referring to is one where a conversation occurs, entirely in English, for several minutes. In fact, it’s the single longest, and unbroken example of such a case that I can think of across my entire anime watching career. A scene like this would have been utterly lost in a dub.

Keeping with that line of thought, it isn’t perfect however. This scene has a few instances where the actors clearly struggle. Making matters worse, one of the characters is supposedly meant to be fluent in English, yet speaks with many unnatural pauses and emphasis in the speech. Still, it is all perfectly understandable. This is the one case where you could look away from the screen and not miss a thing in terms of comprehension where the audio is concerned. It’s truly impressive given anime’s history with implementing English speech.

Going back to the issue of pace though, the fact that there is this big wind up emphasizes the biggest criticism that I can level at the show. It feels like this would have made a vastly superior film, or film series. Some folks who viewed this alongside me found it to be just a tad too long, and the film approach would have solved this issue by tightening the pace. My thoughts are that a two-part film series would have been the perfect length for this one, cutting about 1-2 hours of the actual runntime from the series proper.

Here’s the trailer it’s… something alright. This was clearly the product of the licencor not knowing how to promote this anime, but seeing as it’s the only trailer out there that’s what I have to share with you. Thankfully, it does highlight some of the more unique aspects (and how good the OP and ED are)

Despite that though, The Perfect Insider does scratch an itch in a way that is rarely done by anime in particular. When it comes to the mystery genre, there is an obvious lack of quality content, so to that end you will be in no wait disappointed by giving this a go. However, it truly shines in its philosophical discussion and willingness to take risks in its narrative with taboo subject matter. Unfortunately, the show holds itself back at several points which prevents me from giving it a higher recommendation. Really this is for the mystery enthusiasts who are also looking for a bit of meaningful discussion, if that’s you, it’s a must. Otherwise, there’s value to be found here but you’ll be hard-pressed to consider it a masterpiece.

What are your thoughts on The Perfect Insider? This was also the winner of #anitwitwatches season six, so you can find additional thoughts and conversations by searching the hashtag on Twitter if you would like. If you like the work I do here please consider utilizing one of my donation buttons below as it helps keep the content coming and programs this review came from funded. Finally, thank you so much for reading!

4 thoughts on “The Perfect Insider – A Locked Room Murder Mystery”