After I covered School Days, I decided it was high time I explored some other “controversial” titles with comparable reputations. While today’s show, Koi Kaze has a better reputation in the more versed anime circles, the 2004 series still garners a lot of of negative discussion and criticism due to the subject matter it explores. Anime is no stranger to the siscon scenario, but what happens if we play it totally straight? Today, I’m here to tell you why it’s well worth your time, and for reasons you probably won’t expect.

While the show is about a brother and a sister who fall in love with each other, it’s far from what the series is actually about. It’s better to say that the show explores the concept of love and how society expects people to respond to it. Sure, the topic it explores these themes within is taboo, but that’s also the point.

There’s this strange aversion to media that covers sexually taboo topics here in the West particularly and I always found this to be perversely hypocritical. On the one hand, there’s the fact that siscon shows are enjoyed by a lot in the anime medium to begin with, so why is Koi Kaze so risque? However, even putting that aside, there is a lot of Western media which is far more explicit and indulgent when it comes to this topic that several people hail as masterpiece works.

It’s an easy punching bag to turn to, but Game of Thrones is simultaneously more explicit in its portrayal of a brother-sister relationship while being a lot less meaningful in terms of what it has to say. Still, it’s not the only example, just one I think most people can easily identify and relate to.

So why is Koi Kaze considered to be so controversial then? Part of the reason may have to do with the style of the animation. I mentioned School Days earlier, and in a lot of ways it has that grounded sort of style. It’s not the most attractive, but it leans more into realism than an exaggerated, or more expressive style you might see in other anime.

Then of course is the issue of the ages. Our lead, Koushirou is 27 while Nanoka is only 15. Fiction is already an ideal space to explore the topic of age-gap relationships, and this can be done with little issue if After the Rain is any indication, one such show that several heap high praise onto. Koushirou is interested in Nanoka before learning she’s his sister, but the reason for that is pretty simplistic.

Koushirou hasn’t really ever felt love for anyone. Well, more accurately, he’s always had difficulties identifying his emotions and it is through his time with Nanoka at the amusement park early in the series that he begins to realize that. For him, she’s somebody who offers insight into himself and allows him to feel what’s “missing”.

As such, the writing reminds me of something like March Comes in Like a Lion where the topic is given serious weight. This persists through the direction and sound of the show as well, resulting in a work that truly has something to say but wants you to take it as seriously as possible.

One complaint I’ve seen leveled at the show beyond the “disgusting” subject matter is how Koushirou goes back and forth regarding his feelings toward Nanoka. He knows that they shouldn’t be together, that it’s the wrong thing to do, and yet he struggles with this throughout the entirety of the series.

Nanoka differs in that she is faster to accept these feelings. She’s also a lot more naive, but this leads her to be more genuine and earnest. In a lot of ways she represents an ideal, what love should be, something that transcends these notions we often prescribe.

The pair contrast each other well but further emphasize the main idea of the series. As we live our lives we are shown what romance is meant to be, but in reality it often plays out quite differently. Koi Kaze neither encourages, nor condemns the relationship pointing to the hardships the two would face while still embracing the upsides. 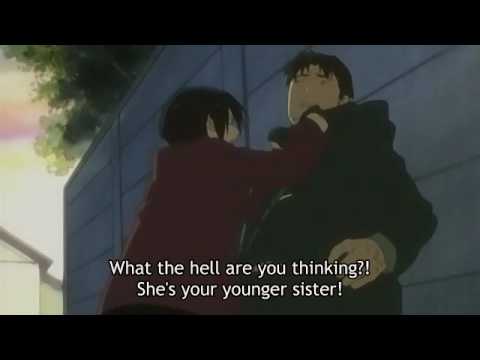 You can best see this in the final stretch of episodes where a co-worker of Koushirou’s discovers the truth about the relationship he has with his sister. However, it goes further when Nanoka and koushirou visit their mother’s house in the final episode. It’s awkward and uncomfortable.

In many ways, Koi Kaze is an interesting series to watch but one that I wouldn’t consider perfect either. As I’ve mentioned the visuals are often not the best and can actively detract from the experience, which is a real shame because everything else is so well put together.

The biggest gripe I have with the series, however, is actually the final episode. It’s so close to being a great ending, but it felt like Koi Kaze never could commit to how it wanted to ultimately handle the conclusion. The awkward family visit leads to a scene of contemplating suicide, then sneaking into the same amusement park from the start, and then finally ends with an “I love you” that’s never really fully said or expressed properly.

As far as endings go, it’s not at all horrible, but for me this muddied the message and idea the show felt like it was going for. In a way, it’s as if Koi Kaze was afraid of endorsing the relationship but still wanted to heavily imply that this was the correct outcome. Given that this decision is the core conflict in the series, it’s unusual that things get close to having a strong sense of finality while avoiding it altogether.

No trailer, as such you’ll have to settle for the OP instead

Still, I have to say that Koi Kaze is far from this controversial monstrosity that many make it out to be. While the subject matter is taboo, it’s a worthwhile experience. This may not be the kind of thing you come back to time-and-time again, but it is an anime that you should give a chance to at least once.

Have you seen Koi Kaze? Does the subject matter put you off at all? I’d love to hear your thoughts on this in the comments below. If you enjoy the work I’m doing here please consider becoming a patron or making a one-time donation by clicking the provided buttons below. Thanks so much for reading and hope to see you again soon!

4 thoughts on “Koi Kaze – This is Controversial?”