The Past Often Informs The Future

To date, Versailles no Bara or The Rose of Versailles, is the oldest anime I have watched to completion. Airing in the Fall season of 1979, this historical drama follows the history of the French Revolution and Marie Antoinette. It’s an almost surreal experience to watch a show and see just how much it has informed modern works, that and to see how anime has evolved with time. All of this holds especially true with a highly respected work such as The Rose of Versailles.

I have to be honest with you guys and say that I was extremely hesitant to watch this show. Partially because both this, and its manga counterpart, are so well-respected but also because this was the oldest show I’d have ever watched. I’ve always had the belief that there is value at looking back on older titles such as The Rose of Versailles so personally there was a lot riding on this show, love it or hate it.

At the same time, I also received a very special submission when I was hosting Jon’s Creator Showcase. A particular video series that discussed an anime director you may have never heard of but are likely familiar with, Osamu Dezaki. Below you can find a complication of all the videos and I do encourage you to give it a watch.

Caribou-kun shares a wonderful series on Osamu Dezaki, a director who’s career has impacted anime greatly but history has largely swept under the rug here in the West

When it came to watching The Rose of Versailles, this video series could not have come at a better time. Having watched it just before starting the show it allowed me to approach the anime at a whole new angel, one that I am excited to share with you today. However, first, a little about the show itself.

Following the events leading up to the French Revolution, this anime primarily follows the exploits of Marie Antoinette and the fictionalized life of Oscar François. Much of the 40 episodes are accurate accounts of real history that are presented in a fashion that respects the viewer’s time by showing only the most important parts.

You can effectively split the anime into two halves. The first being primarily about Marie Antionette with Oscar being in a more supporting role, despite being the main character, while the second half has Oscar center stage with Marie Antionette largely residing in the background.

The reason I wanted to mention what the show was about before explaining why the video series was so relevant is that the idea that past works influence future ones can be easily seen just in the core premise of the show itself. The Rose of Versailles is rooted in history and actual accounts which acts as an excellent parallel to how animated works are often influenced by each other.

If you want to see what I mean in a blatantly obvious way, watch the first episode of this series and then watch the first episode of Ikuhara’s classic series Revolutionary Girl Utena. Even to an untrained eye, it should be obvious by the sheer number of cues Ikuhara borrowed from Dezaki that this series (and others, especially other Dezaki works) acted as a major source of inspiration.

As a big fan of Ikuhara, this lens that I viewed the series with added depth and enjoyment not only to his works but to this one as well. Again, this isn’t to say I wouldn’t have still looked to how an older anime like The Rose of Versailles hold significance even today, but the video primed me to really keep an eye out for the hallmarks of Dezaki’s direction, which in turn inspired me to look for that in other shows as well.

Enough about Dezaki and how the past influences the future. Let’s circle back to how I mentioned that The Rose of Versailles is a fairly accurate retelling of actual history. Of course there is some dramatization, such as Oscar’s entire story, but almost everything else is entirely accurate.

On its own, this bumps up the “coolness factor” of the anime by quite a bit, but it also makes everything feel grounded. Even when the series is in full fiction mode, which is pretty obvious most of the time (it almost becomes a soap opera at least twice), it never strays from the realm of plausibility.

However, even some of the actual events such as the trial feel extraordinary. If I did not know the history in that case, it would not be difficult to think that the whole arc presented there was fiction. This is just a testament to the execution above anything else.

Beyond that though, the show is very well put together. Visually, the show is dated, but I’d argue that most of the time the animation holds up. It’s really only ever let down by the quality of the sound design which is not always on point, but in the show’s favor, is also reasonable.

You’ll see a strong female lead in Oscar who was raised to be a man at birth. It’s a novel concept that (mostly) breeds interesting conflicts and scenarios. The dynamic between Oscar and her attendant Andre is a smart inclusion as it affords a lens for not only the nobility, but the lives of the common man in France at the time. As the series goes on Oscar is disillusioned by all the suffering France’s people face.

Unfortunately, The Rose of Versailles is not without its flaws. Specifically, there are three major flaws with the work that holds it back from being the true masterpiece it really could have been. They are as follows:

Starting with the first issue, the show is predictable. While it is true that this show is rooted in history, and thus, this should be somewhat expected, I found this to still be rather obnoxious. Let me explain.

When it came to the real life moments, the show usually delivered just fine. It could get a little drawn out with the point, but it never felt like The Rose of Versailles was just twiddling its thumbs. Instead, the complaint is actually in regards to the few original moments the series decided to depict. 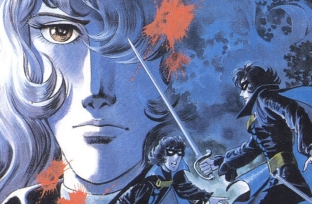 One such example is towards the end of the show where it is learned that there is a traitor in Oscar’s military unit. This is a great opportunity to spice up the plot and add some drama, but the show is almost too eager to give up all of its mysteries. I had it solved even before a traitor was mentioned, it was just that obvious. Yet, this issue persists throughout the entire show. Who is the Black Knight? Who’s behind the assassination plot? The list goes on.

If it were only this issue, I could easily excuse it but sadly it isn’t. The second issue, Oscar’s character, is far more egregious. I want to stress that a strong female character such as this is fantastic, but this became a victim of itself in the end.

First, Oscar being a woman who is raised as a man breeds interesting conflict. You can see that Oscar wrestles with this issue but eventually moves past it. Unfortunately, The Rose of Versailles feels the need to retread this idea repeatedly to the point of exhaustion. By the time the plot shifts to focus almost entirely on Oscar, I started to lose interest because the conflict was dumb and distracted from the real meat of the story, the French Revolution.

This leads into the second half of this issue, and that’s the fact that Oscar is just too perfect. She never makes a mistake, and even when the show tries to convince you that she does, Oscar is always rewarded for her decisions. I’m really disappointed by this because it cheapens an otherwise excellent character. She just doesn’t feel realistic compared to the rest of the cast as a result of being infallible.

It’s not as if Oscar does not have growth or face turmoil over the various events in the series though. That said, it would have been a lot nicer for Oscar to have failed from time-to-time or face a real consequence in regards to her actions. Some of you may point to a particular moment if you’ve seen the show, but I challenge you to really look at that moment.

Finally, tying into this issue with Oscar is the second half of the series. The focus shifts away from Marie Antoinette who was an awful leader but interesting character. Her exploits were fun to follow. However, Oscar’s stuff just isn’t for too long. By time the French Revolution really comes into play things are back on track, but there are several episodes of Oscar showing off her angst over being a woman. It’s boring, and again, something the show has already communicated multiple times by this point.

I do want to give The Rose of Versailles some credit here, it does end up going places, but it’s a stain on the show when it comes to the otherwise snappy pacing. A real shame too. If it weren’t for these issues I would have confidently given this a perfect score.

Instead, the series will simply have to settle for a solid recommendation on my part. Despite its flaws, The Rose of Versailles does a lot right. The historical context, innovative ideas for its time, and the general fun the story brings is enough to still make this very worth your while. Not only that, but you get the benefit of seeing those influences I mention, how the anime industry evolved to what it is today.

There wasn’t a trailer, so enjoy a short clip so you can get an idea of what the show is

Don’t let the show’s age stop you from enjoying it either. You’ll find that the story will still captivate you even when the animation isn’t fluid or flashy. There’s a charm to watching something like this and it can be a humble reminder of how far things have come. So if you haven’t watched The Rose of Versailles already, go and give it a shot.

That’s a wrap folks! I’d love to hear your thoughts on this one. There were a few things I didn’t get to mention, such as Oscar not being the original main character in the manga, but I’ll leave that stuff for you to discover on your own. If you like my work here, please consider a donation via my Patreon or Ko-fi by hitting their respective buttons below. Thanks for reading and I hope to see you again soon!