One of the best things about ‘BoJack Horseman’ is how silly it can get. ‘Planned Obsolescence’ is an example. While dealing with three different plotlines, this episode works with the asexual Todd getting to meet his new girlfriend, Yolanda’s family. Hilarity ensues as both he and Yolanda try to keep their asexuality a secret while dealing with her sex-crazed family. The comedy and visual style are reminiscent of screwball comedy plays, and I don’t think I have ever laughed at an episode this much. The only reason it is not higher is because it is as much of a subplot as the other two plotlines, where BoJack is mostly making fun of his ‘Philbert’ co-star Gina Cazador (Voice of Stephanie Beatriz) for her love of musical theater, and Mr. Peanutbutter taking his new girlfriend, a pug named Pickles (Voice of Hong Chau) to watch a space station blow up. ‘Planned Obsolescence’ is still a well-animated and funny episode.

The best episodes of ‘BoJack Horseman’ are the darkest ones, and ‘Escape From L.A.’ is one of them. In ‘Escape From L.A.’, BoJack, after breaking up with his owl girlfriend, Wanda (Voiced by Lisa Kudrow), and becoming tired of the hustle and bustle of working on the ‘Secretariat’ movie, decides to go to New Mexico to catch up with his love interest, Charlotte (Voice of Olivia Wilde), only to discover that she is married and has two kids. She then offers to let him stay as long as he likes while also getting a boat and making friends with Penny (Voice of Ilana Glazer), Charlotte’s seventeen-year-old daughter, to the point where he becomes her prom date. While ‘Escape From L.A.’ may not be as dark as later episodes, what makes this episode truly stand out is its ending, which shows Charlotte cutting ties with BoJack after catching him getting ready to sleep with Penny after being rejected by Charlotte. Her final words to him (with an F-bomb for good measure) are as chilling as the ending is devastating and impactful and keeps you on the edge while you figure out what will happen in later seasons.

If there was an episode of ‘BoJack Horseman’ that made me notice how truly tragic of a show it was, it would be episode 8 of Season 2, ‘Let’s Find Out’, which shows BoJack as a contestant of a game show called ‘Hollywoo Stars and Celebrities – What Do They Know? Do They Know Things? Let’s Find Out’ hosted by Mr. Peanutbutter. BoJack finds himself pitted against Daniel Radcliffe (Voiced by none other than himself) in a series of questions, though he is not as good at answering any of the questions, until he learns tricks that Mr. Peanutbutter gives off, which eventually causes BoJack to do better. Though, the real breaking point comes near the end when Mr. Peanutbutter starts to show ire to BoJack for attempting to kiss Diane (Peanutbutter’s wife at the time). The moment BoJack opens up about his depression and self-loathing feels like a punch to the gut and makes the show relatable to those who are struggling. ‘Let’s Find Out’ is when I truly appreciated the show for what it had to offer; making the second season that much harder to get through. 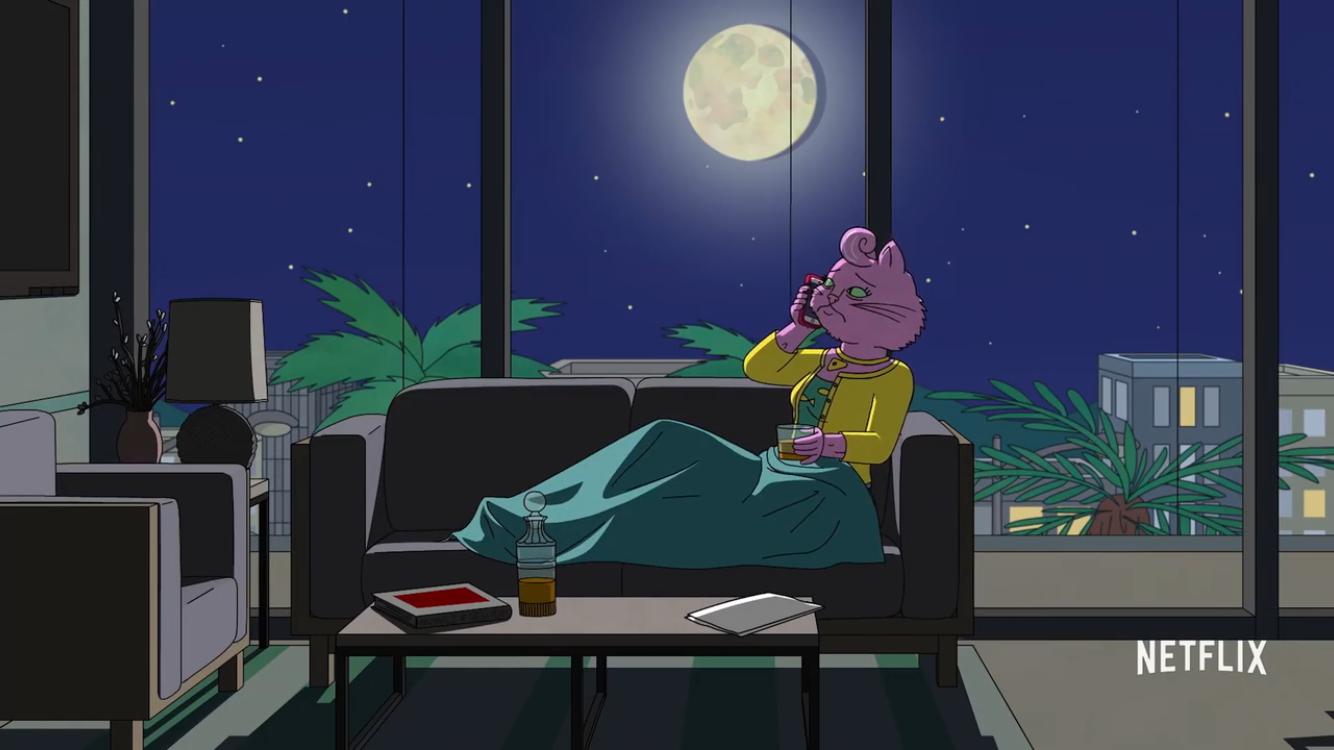 ‘BoJack Horseman’ has some interesting characters that immediately become fan favorites; Princess Carolyn is no exception. Her pep and eagerness to find the next project while becoming every celebrity’s go-to agent is what makes her so engaging. However, like BoJack, Princess Carolyn has a tragedy to her. ‘Ruthie’ deals with how she gets through what may be the worst day of her life, narrated by a future descendant of hers named Ruthie (Voice of Kristen Bell). As determined as she is, PC goes through the trials of a terrible day from having a miscarriage, to breaking up with her boyfriend, and even firing her assistant, Judah (Voice of Diedrich Bader). Yet the real shocker comes near the end when it is revealed that she made Ruthie up as a coping mechanism when things get low for her, making it a bittersweet ending. 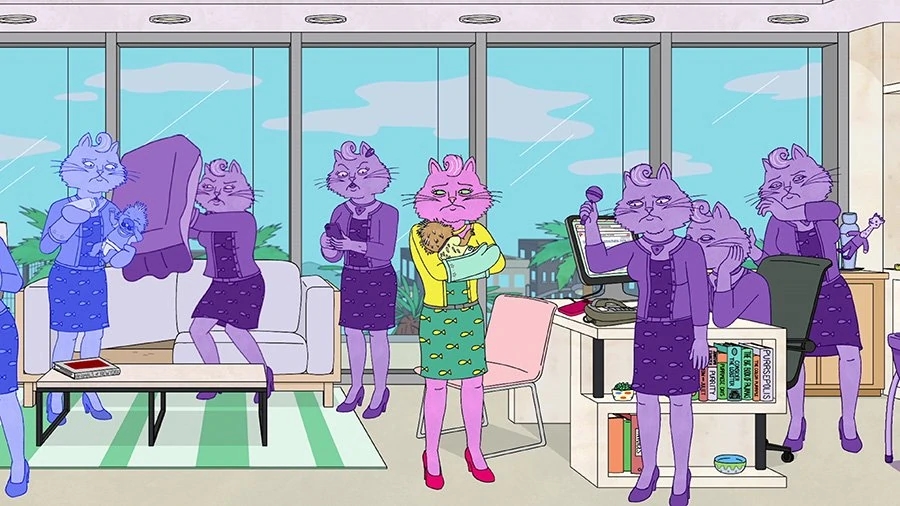 Yet another Princess Carolyn-centered episode which shows her trying to manage taking care of her adopted child, a porcupine which she calls “Untitled Princess Carolyn Project”, dealing with work, and going to meetings. ‘The New Client’ is amazing in visual style, which showcases the struggles of being a parent and dealing with more than you can handle, while trying to tend to your little one. As a father, this episode is relatable. Plus, it has quite the sweetest ending, where she finally comes up with the name for “Untitled Princess Carolyn Project”, which ends up being none other than “Ruthie”. 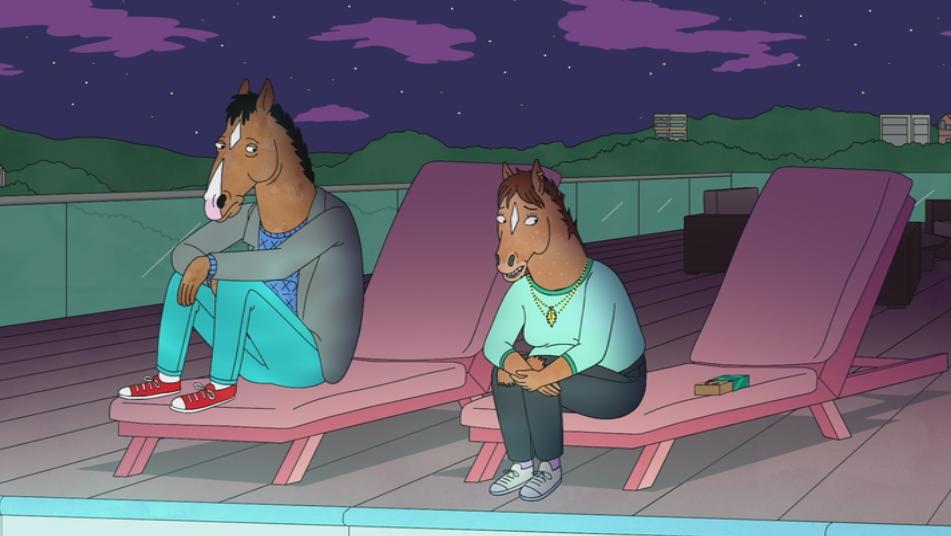 The mind of BoJack Horseman must be a harsh place to live, as this episode mainly deals with the inner thoughts that plague BoJack throughout his day, illustrated in a simple, yet hectic notebook style of animation. This episode is noteworthy for its portrayal of depression and anxiety, as we get to hear his inner monologue talk about how much of a no-good person he is and the regrets he has over his past choices. If ‘BoJack Horseman’ is not on your watchlist by now, then this episode should be a reason. 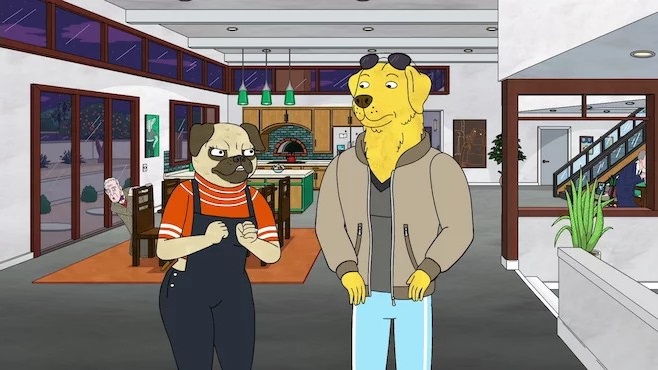 I have mentioned that ‘BoJack Horseman’ excels in comedy as well as drama, yet ‘Surprise!’ takes the cake for being the best form of physical comedy this show has to offer. In ‘Surprise!’, everyone is gathered at Mr. Peanutbutter’s house for a surprise wedding party for Mr. Peanutbutter and Pickles. Yet, when the couple get home, the happy-go-lucky, not being able to take the guilt anymore, admits to cheating on Pickles with his ex-wife Diane, causing the surprise party to be ruined and the mayhem to ensue. While we see the two dogs bicker, we are treated to sight gag after sight gag of the many guests as they try to avoid being caught. Add to this, the attempts by Princess Carolyn, Todd, Diane, and BoJack trying to keep baby Ruthie from crawling around the house, and you have a great comedic episode that excels in direction. 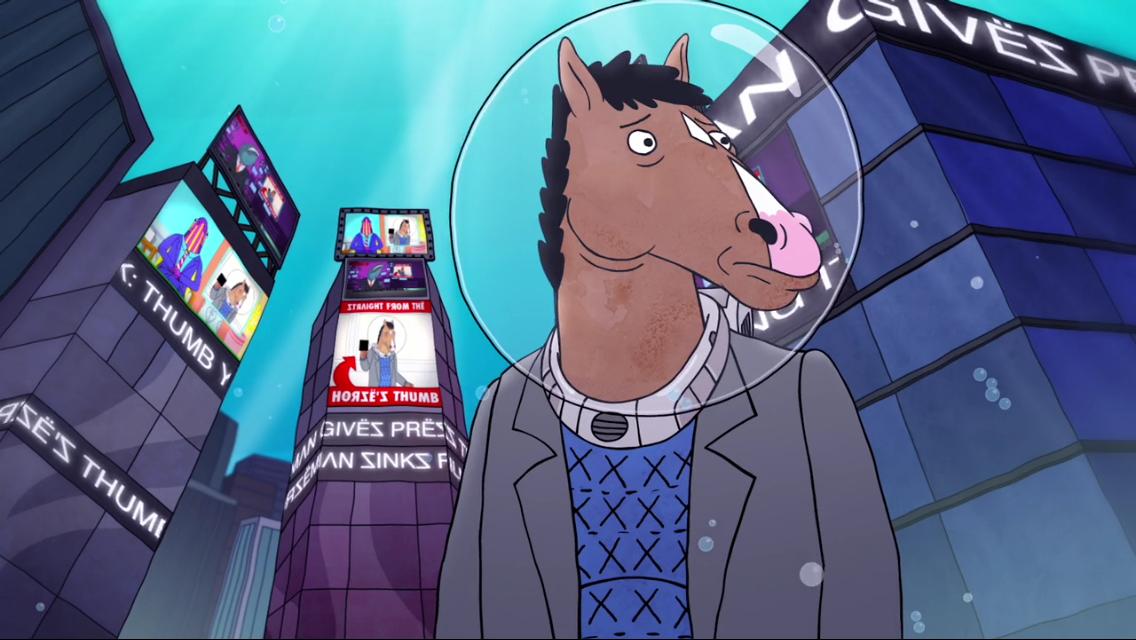 ‘Fish Out of Water’ is regarded by many to be one of the best episodes of ‘BoJack Horseman’ and it is easy to see why. What separates it from other episodes is that it does not rely so much on dialogue as it does on music and atmosphere as we see BoJack go underwater to promote ‘Secretariat’ while trying to bring a baby seahorse back to his family. ‘Fish Out of Water’ is the show at its finest. So what two episodes can top this? 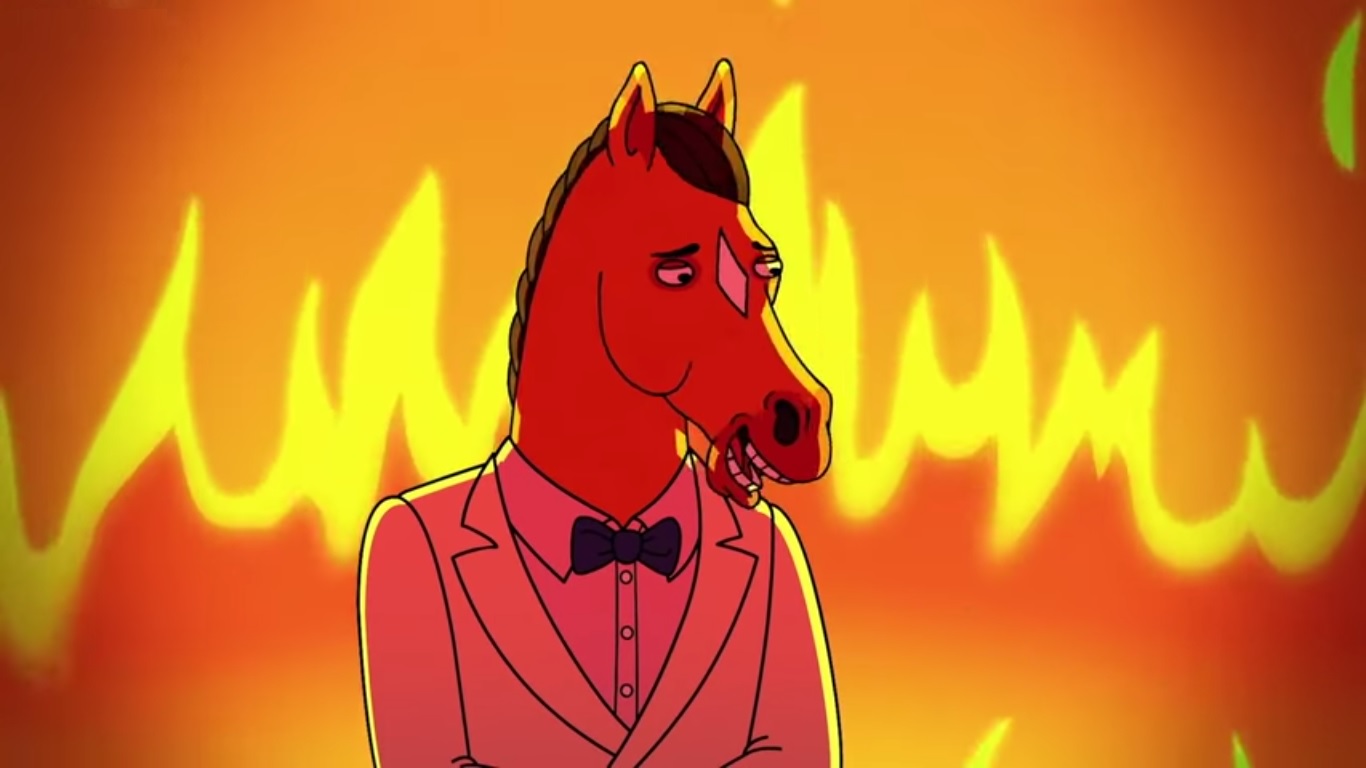 Beatrice Horseman (Voice of Wendie Malick) is one of the most unlikable characters on ‘BoJack Horseman’. She is as resentful to BoJack as she is rotten to the core. However, after seeing the Season 4 episode ‘Time’s Arrow’, you might see her in a new light. As we are taken a trip into her past where we are given more insight into the relationship with her father, Joseph Sugarman (Voice of Matthew Broderick), as well as the moment she met and married Butterscotch Horseman (Voice of Will Arnett). ‘Time’s Arrow’ has a great visual style as we see that faces of the past are nothing more than scribbles, while the emotion comes into how traumatic of a life she had leading up to her anger and resentment as we see the flames surrounding Joseph as he gets ready to burn Beatrice’s belongings and the moment Butterscotch got their maid, Henrietta pregnant and had to give up her baby for adoption. Yet, what really brings in the waterworks is the end when we flash back to the present; Beatrice, who now suffers from dementia being put into a dingy-looking rest home to live alone by BoJack, who has shown nothing but resentment this entire season, only to make peace with his mother after she finally starts recognizing him; comforting her with tales of the Sugarman place. It’s a bittersweet ending that will bring tears to anyone’s eyes.

‘Time’s Arrow’ may have been an emotionally dark episode, but ‘The View From Halfway Down’ ups the darkness and devastation to a literal extent. The penultimate episode of the series shows BoJack catching up with the most important people in his life who died; they include his ‘Horsin’ Around’ co-star Sarah Lynn (Voice of Kristen Schaal), his former friend, Herb Kazzaz (Voice of Stanley Tucci), Beatrice, Corduroy Jackson-Jackson (Voice of Brandon T. Jackson), his uncle, CrackerJack (Voice of Lin-Manuel Miranda), and a merge between Secretariat and his father Butterscotch, as they share stories, eat their last meals, and put on a show to honor BoJack, though he does not understand why he is there in the first place. There is so much symbolism in ‘The View From Halfway Down’ that fans can analyze, and its final moments are its heaviest. It is a rough watch and may be my most favorite episode of ‘BoJack Horseman’ to ever hit Netflix.

Probably the most mature episode of the first season, which deals with regret, frustration, and how not everyone is willing to forgive for past mistakes. (Plus contains the first F-drop)

I have never felt so tense watching an episode of ‘BoJack Horseman’, which deals with Todd and Diane saving a chicken from a slaughter house.

Take a look at the parallels between Bill Cosby and Hank Hippopopalous (Voice of Phillip Baker Hall) and you will see how clever of a satire this show really is.

‘A Horse Walks into a Rehab’ 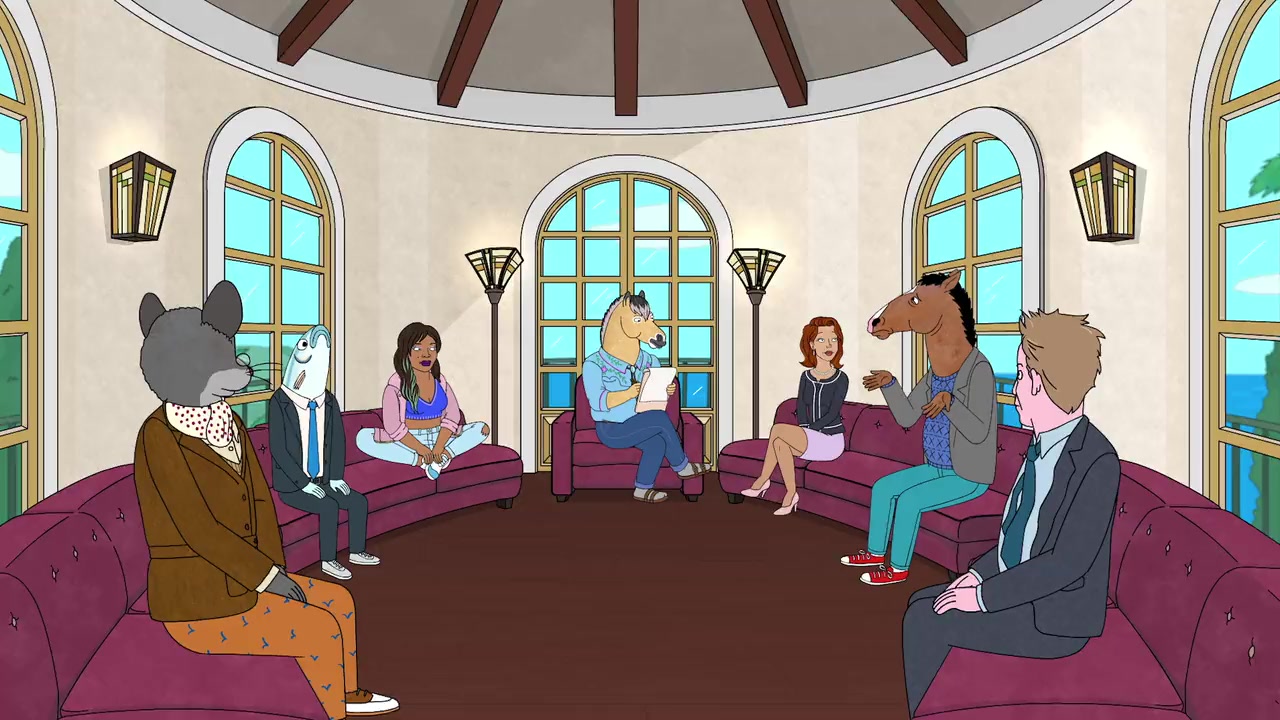 Glimpses of BoJack’s past as we see how he succumbed to alcoholism are dark and insightful.

‘The Face of Depression’ 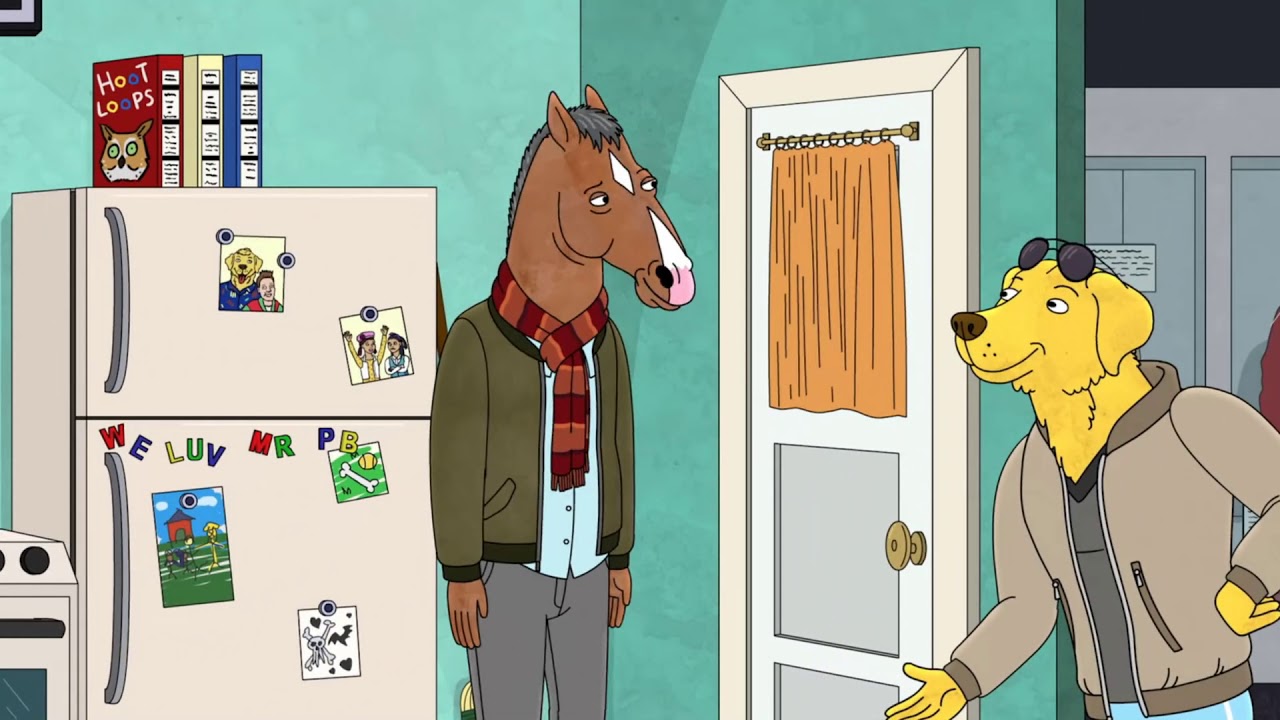 Probably the most bittersweet episode as we see BoJack connect with his friends while leaving rehab and changing himself for the better.

‘A Quick One While He’s Away’ 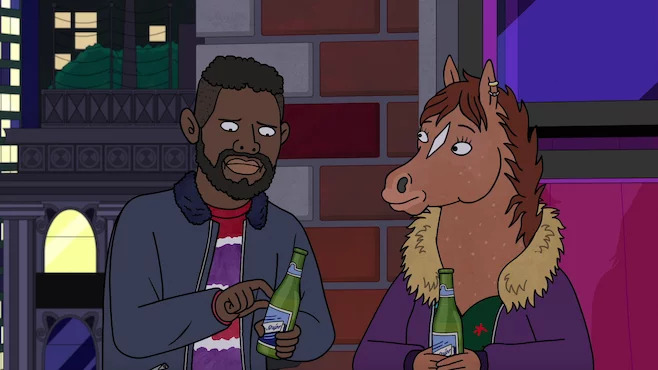 Catches us up with past side characters while setting us up for a dark second half to a final season.