If you are on Twitter or in my Discord, you have probably already seen that I made a bunch of anime-related Valentine’s Day cards. If not, then this post will discuss why I did this project and what inspired each card. Please enjoy!

Why I Did This

Lately I’ve been really wanting to do a challenge of sorts, especially one that allowed me to work on my graphic design skills. That’s why when I remembered Valentine’s Day was just around the corner, I thought there was a perfect opportunity! You see, most anime cards of this nature are really bad and I knew I could do better. Then I started to concept over the weekend prior. Once I got home at the top of the week, I worked non-stop on these so they’d be ready in time. The end result:  quite a few genuinely great cards that I’m really proud of.

Below you will find all 20 cards that I created. They are, as far as I know, original concepts. Each is presented in the order that I created them. Thanks to the folks in my Discord who helped insure these were good, especially Scott and Nabe-chan as they helped the most. 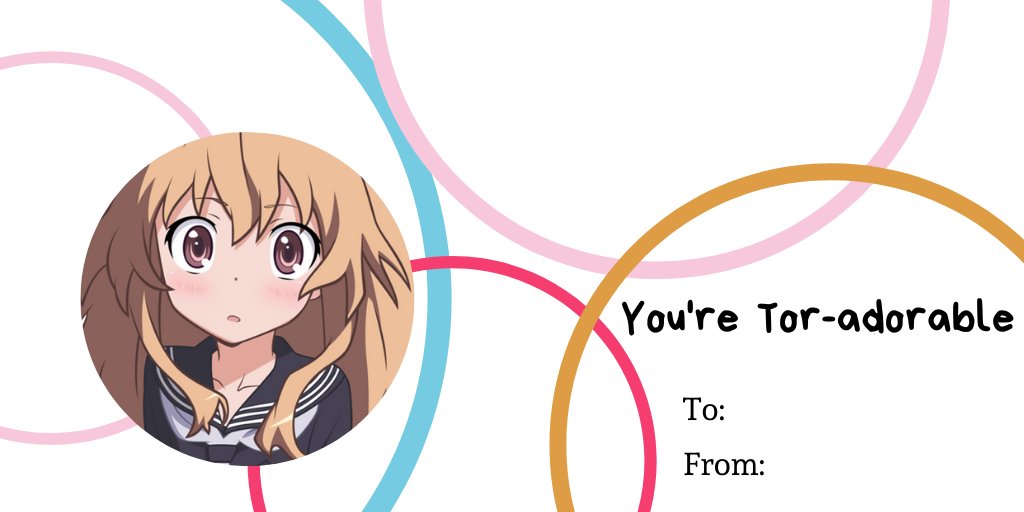 This was my first card that was kicking around in my brain, and the reason I decided to make these in the first place. All I could think was, “You’re Tor-adorable” would make for a great card. The rest is, as they say, history.

Originally the design for this one wasn’t very close to this, but I was really inspired to do the rings from one of the OP’s or ED’s, I can’t remember which. However, I’m glad I made a drastic change to the initial design because this one came out about as great as I could have hoped for. 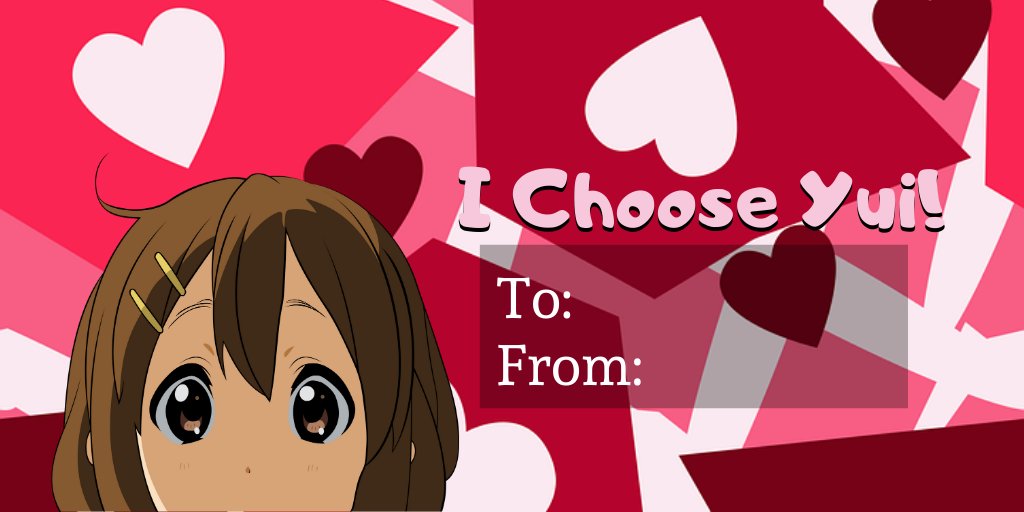 The only other one I had “premeditated” was the “I Choose Yui!” card idea. I love me some terrible puns, and this is just what the Dr. ordered! Outside of the caption, the rest was put together with the images I had available, which were surprisingly smaller in number than expected. I was very careful about the images I used in each of these cards, which limited me, but I think that also benefited the cards in the long-term. 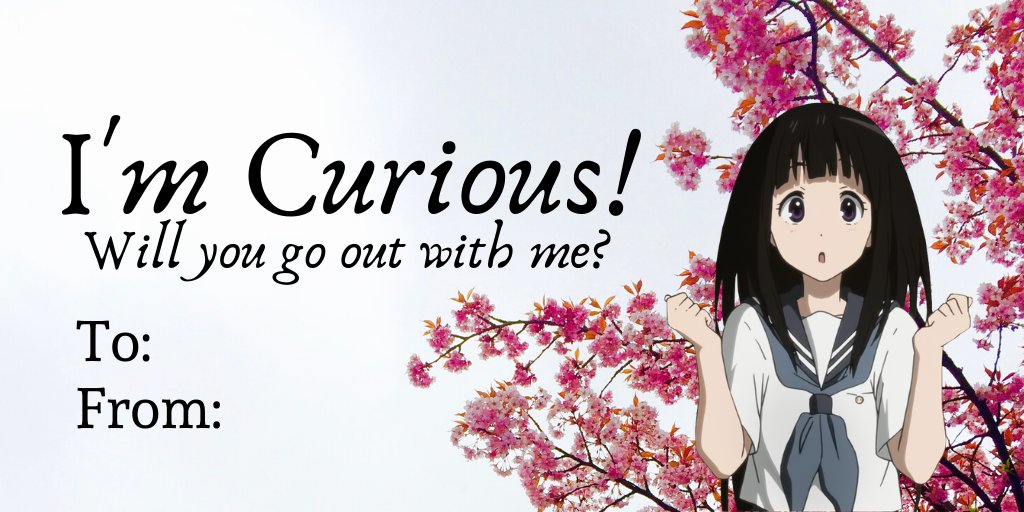 These next couple of cards were created Monday evening when the project was basically still in its infancy. I was wracking my brain to come up with ideas and asked my Discord folks to pitch ideas. While those rolled in, I was struck with inspiration to make a Hyouka card. Since Chitanda is always stating how “curious” she is, I thought that made for an easy caption. The above was the end result, which was really well-received in the Discord. 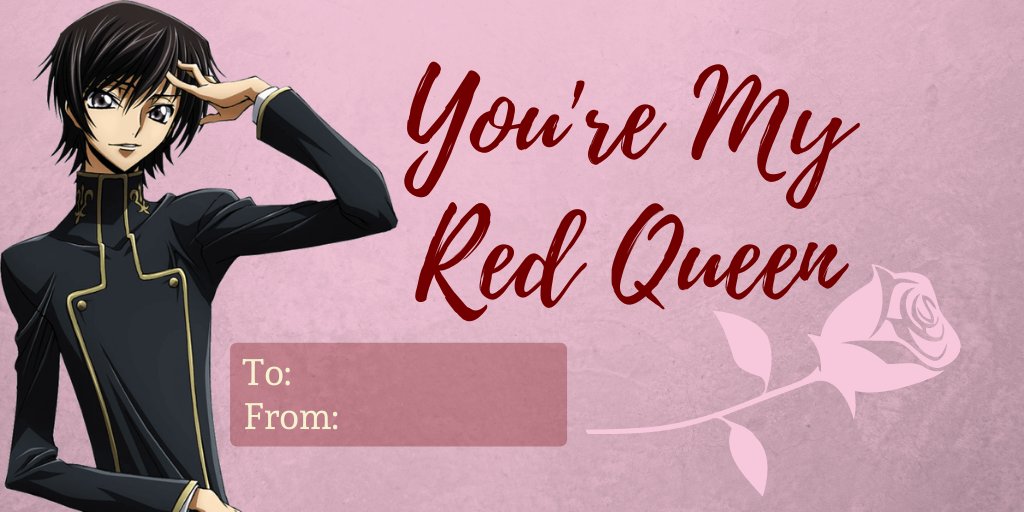 Remember how I said Scott helped a lot with these? Well here’s where he really started jumping in with the help. He simply made a suggestion for a Code Geass card with a caption alluding to “The Red Queen”. So here’s what I came up with!

This one was a real pain in the butt. I knew I wanted to use that picture of Lelouch, it was just too good, but everything else simply didn’t want to play nicely with each other. Getting the font and colors sorted wasn’t too bad, but then what was I to do with all the empty space? The end product and background choice was my ultimate solution, which I think came out fairly nice. 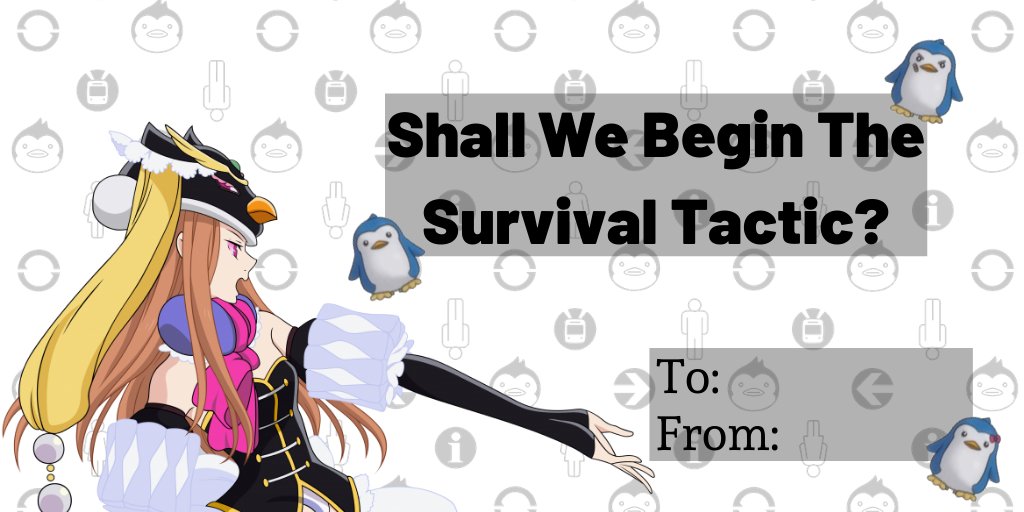 This is my favorite show. Are you surprised I made one for this? This is one of two cards that’s more on the suggestive side of things. Mostly I wanted these to be cute, corny, or actually meaningful. However, this was pretty low-hanging fruit and I just had to seize the day here. 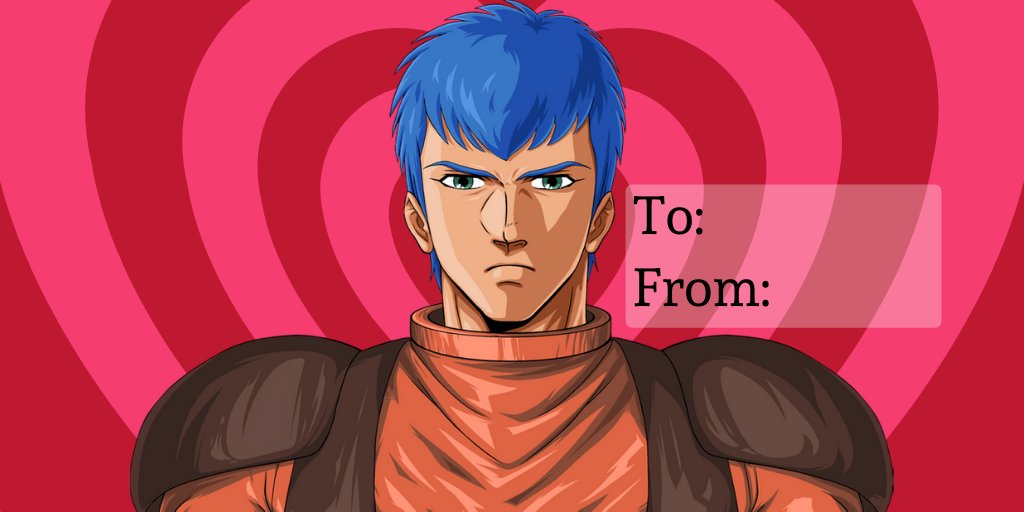 Scott put in a request for this one, I simply realized it with some added flourish with the repeating heart background. Really, this one goes out to you Iniksbane. I didn’t want to make meme cards if I could help it, but I figured one or two wouldn’t hurt. Plan “B” was all about making terrible meme cards though and this would have been at home on the more tame end of the spectrum. 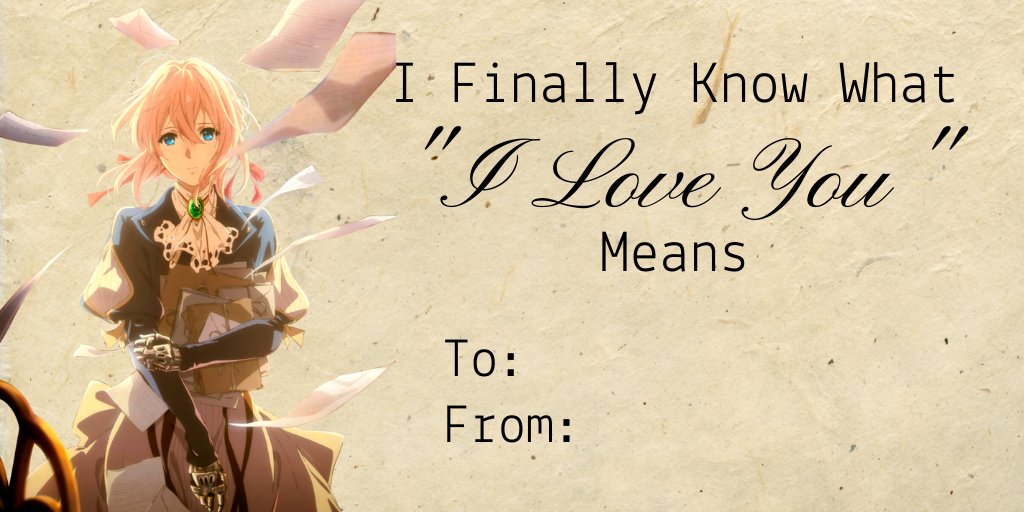 Here’s another show I really like and knew would work for a card. The tricky part was the caption, the rest came pretty easily. It’s also the first card made at the start of the Tuesday creation session which lasted almost the entire day. However, it was conceptually finished right before I went to sleep the night prior in a flash of inspiration that I immediately wrote down because I thought it was just too good. 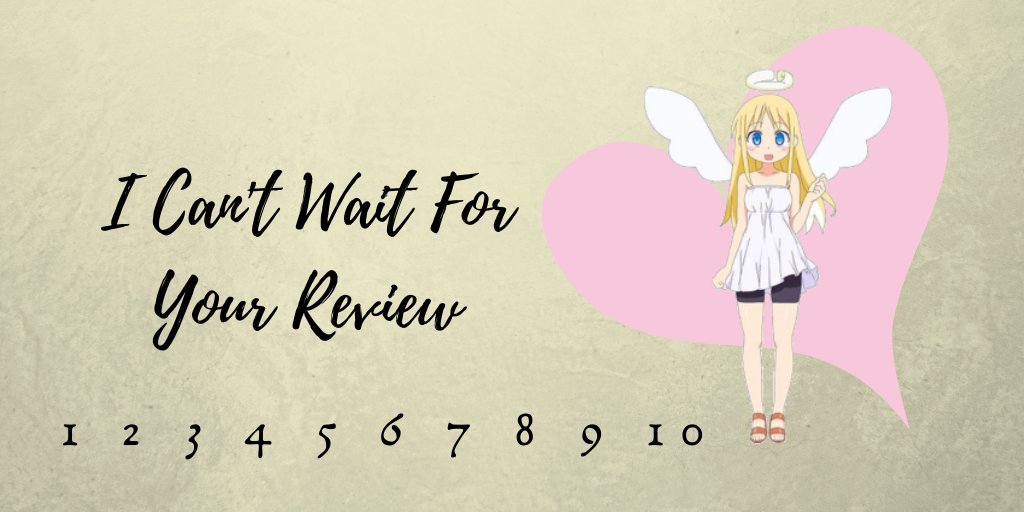 This one goes out to all the fans. I think the card is pretty self-explanatory if you know anything about the show. By far my most “racy” card. Unfortunately, the quality of the image used here is very low because it was hard to find one that’d work. Still, I thought I’d ride the hype on this one a little bit, plus it was funny. 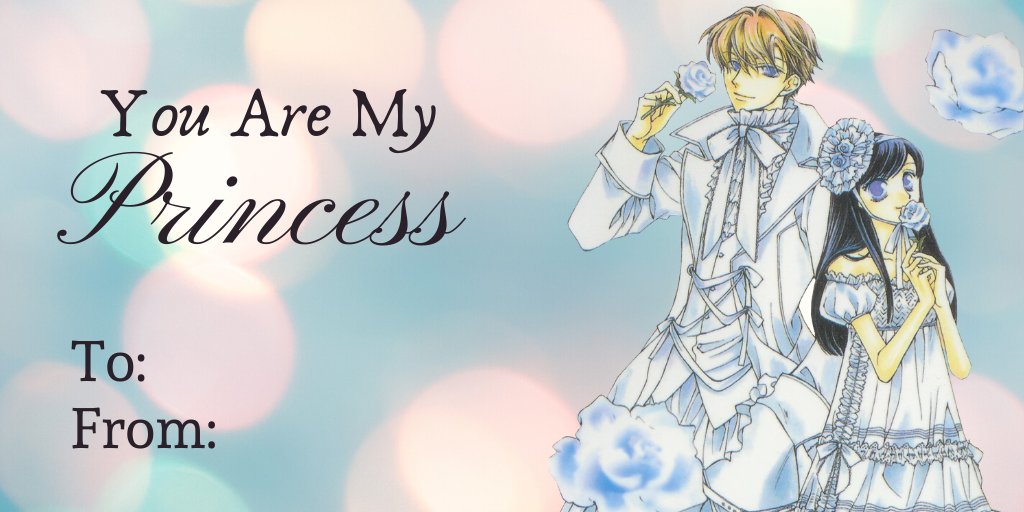 Nabe put in a request on Monday night for this one but I was struggling to come up with anything decent. It’s true what they say though, sometimes a “good night’s rest” (mine wasn’t but I digress) is all you need. Came to me fairly easily and I like the way this one looks aesthetically. Not my favorite card but it’s pleasant. 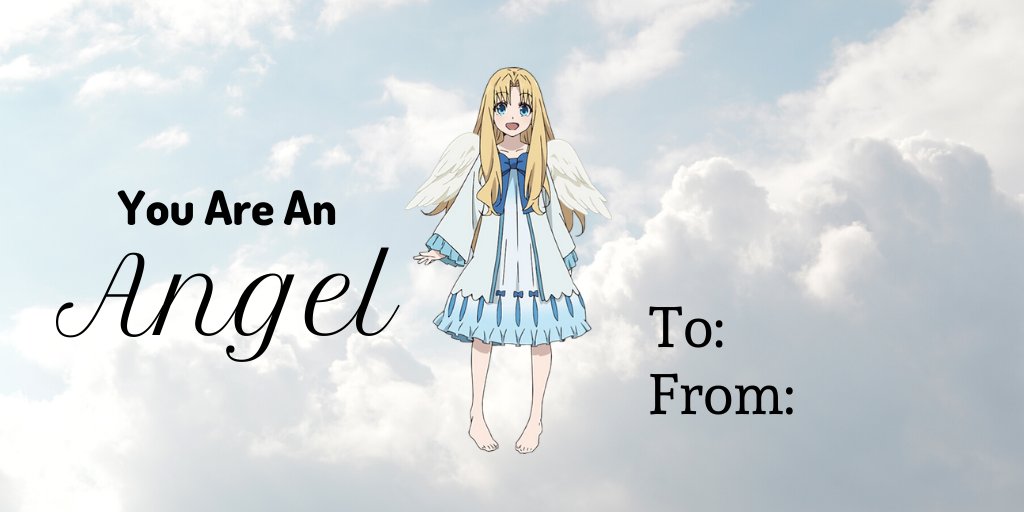 I wanted to make a card with this caption but since I had already used the angel girl from Interspecies Reviewers for a separate card, I almost scrapped this one. Then I remembered Filo existed. So Shield Hero got a card and I regret nothing! Out of all my more serious cards though, this is my least favorite. 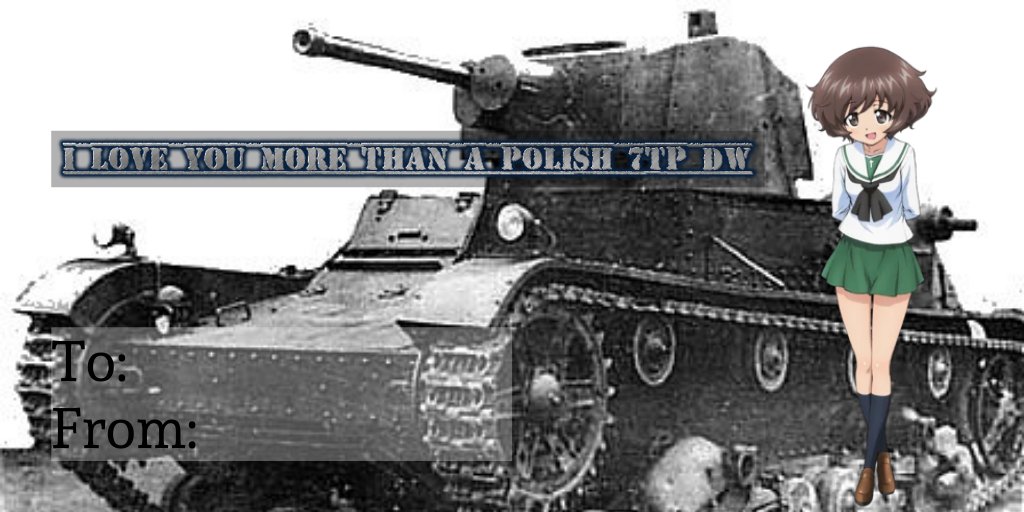 Some explanation is definitely due on this one! Obviously my ugliest card, but there’s a story for this one. You see, I love creating media from the perspective of someone else creating media. You’ve seen that a few times in my writing, GGO being a good example, but not much in my graphic design work.

Concept:  What if Yukari (the tank otaku girl) made one of these?

I think this one is pretty funny. I used her favorite tank as caption and background. Mostly a gag card for some of my followers who enjoy Girls und Panzer as much as I do (if not more). 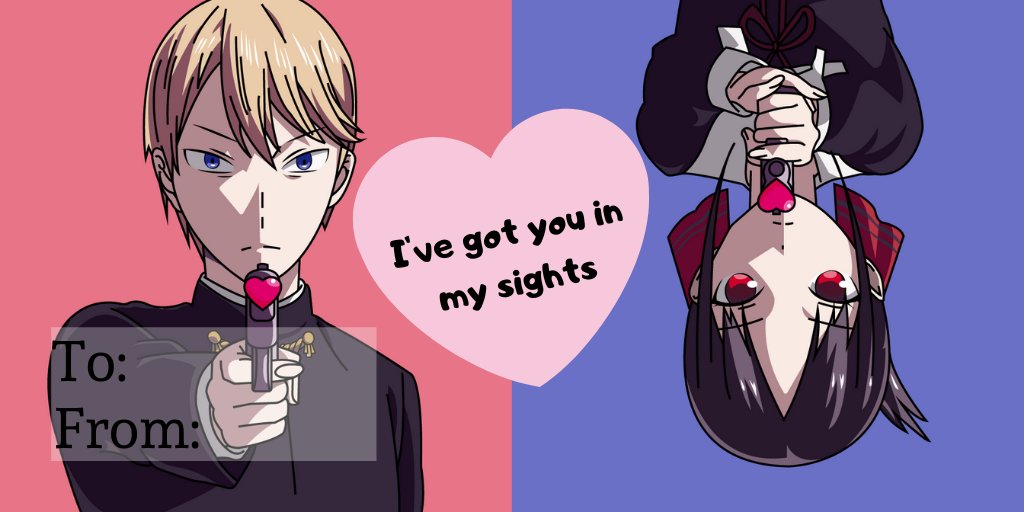 When you think of Valentine’s Day, this show is not far from thought. It was one I knew I wanted to work with while coming up with as many designs as possible, but one that proved difficult! I got a bit lucky and found a dream image, so the rest slowly came together. This was one of the cards that took me the longest to make, even if it didn’t seem like it in real time to folks in my Discord. I had been poking at it almost the entire day up until this point. However, the effort seems worthwhile because this does look good. 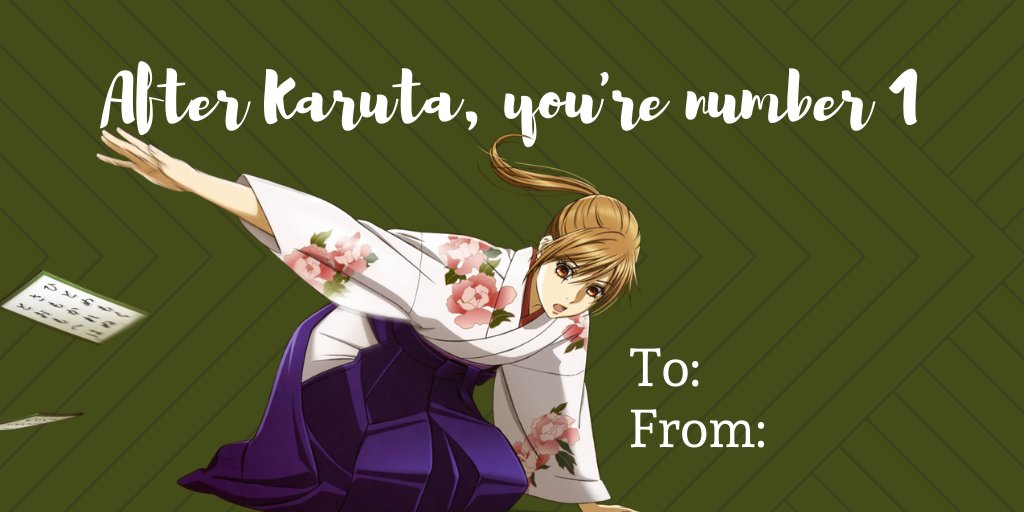 Scott makes another request! He wrote the slogan again and I simply did the design work. He was very pleased with it, so maybe you will be too? I have yet to watch this show still so I don’t have a ton to say on it unfortunately beyond that. Think this one came out decently though. 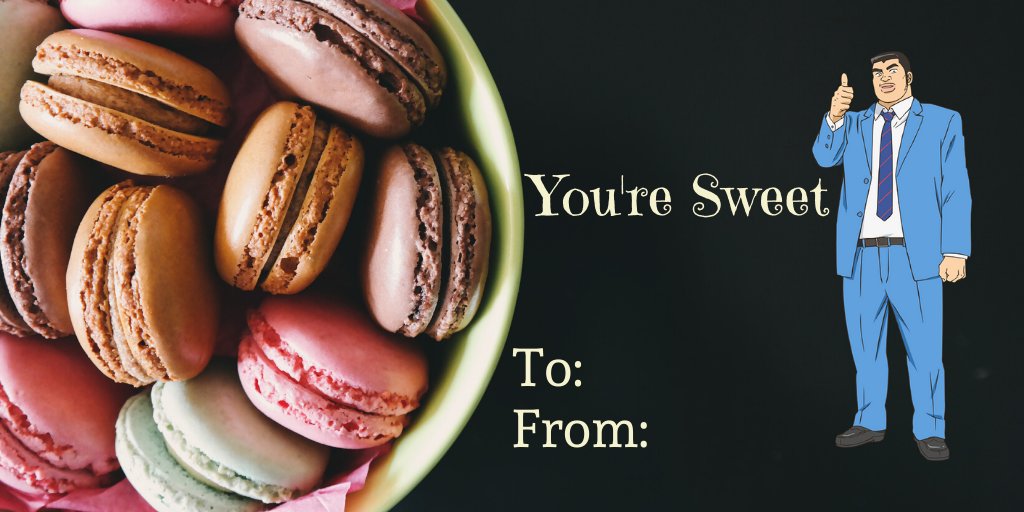 I wanted the MC floating on the strawberry but image searches did not comply. Instead, I pivoted to this concept. It’s a bit too “business-like” for my taste, but at the same time I still kind of like it. Therefore, you get to see it!

Your Lie in April 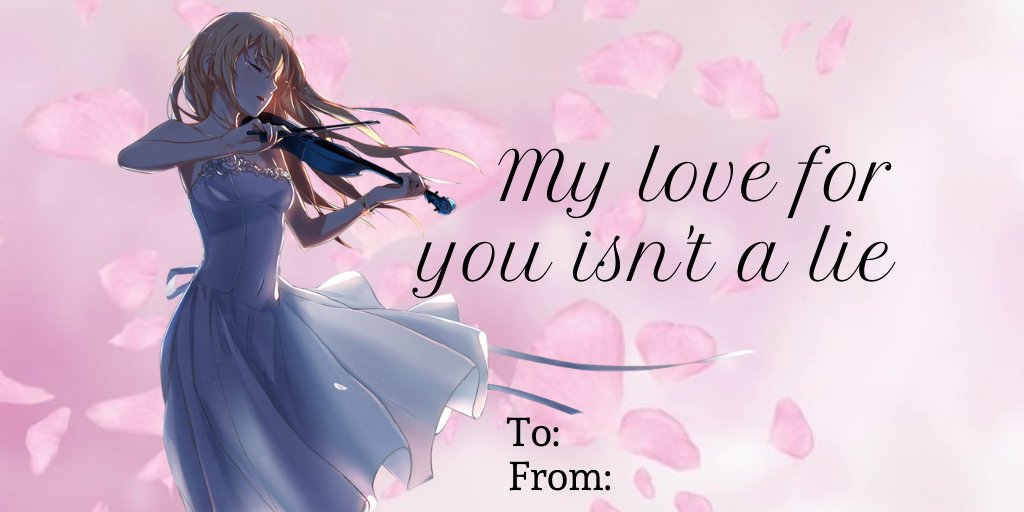 Was scrolling through MAL and saw this one pass by. Immediately thought up the slogan, knew exactly what images I wanted, and it all just came together in a perfect storm. Seriously, this came out WAY better than expected and I’m really pleased with this one in particular. 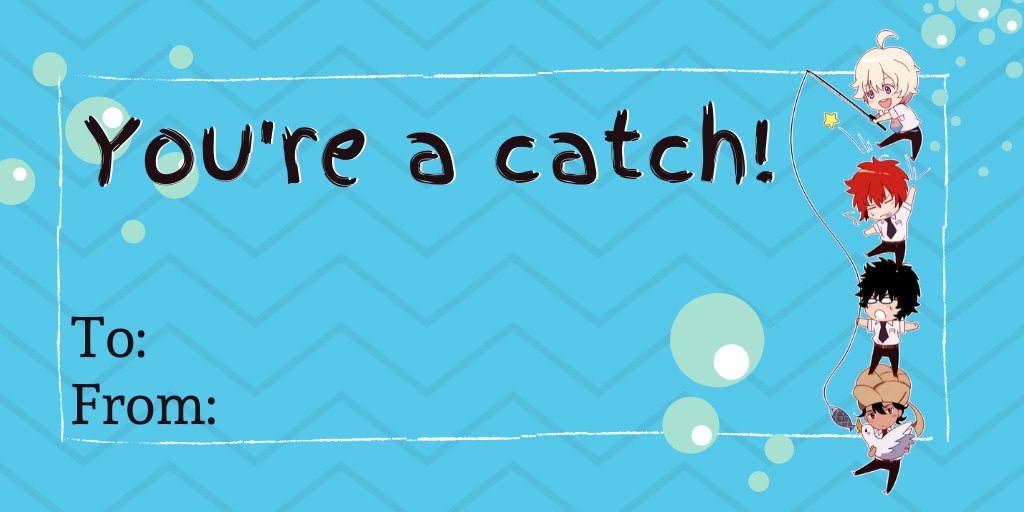 Nabe suggested this one and I’m glad they did because it turned out super cute. This one is probably my favorite of the bunch from the Tuesday session. I don’t think there’s much else to say, but I’m sure you’ll agree that this one is a real winner as well! 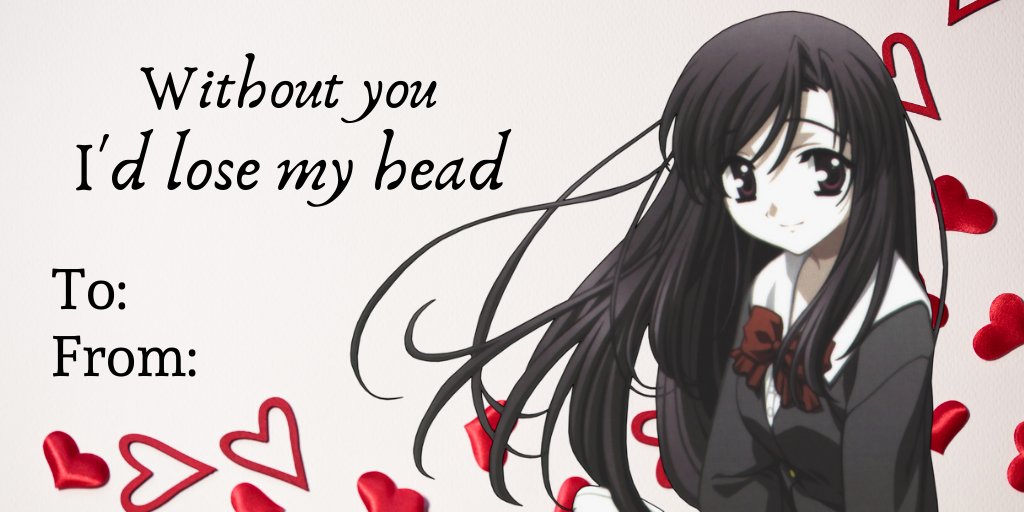 Alright, so this is actually two images, but just one card. I did this as a part 1/part 2 kind of joke for Discord people. As you know, School Days was the previous #anitwitwatches and I couldn’t resist a terrible joke… 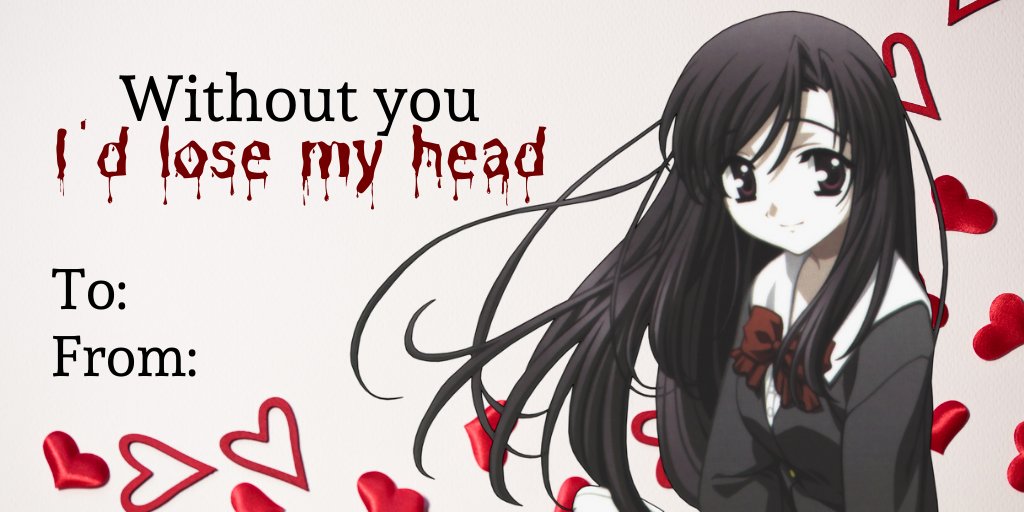 The second image is pretty funny/awful if you’ve seen the show or know about the ending. Otherwise, I’m sure it just looks weird. Either way, I enjoyed making this one quite a bit. 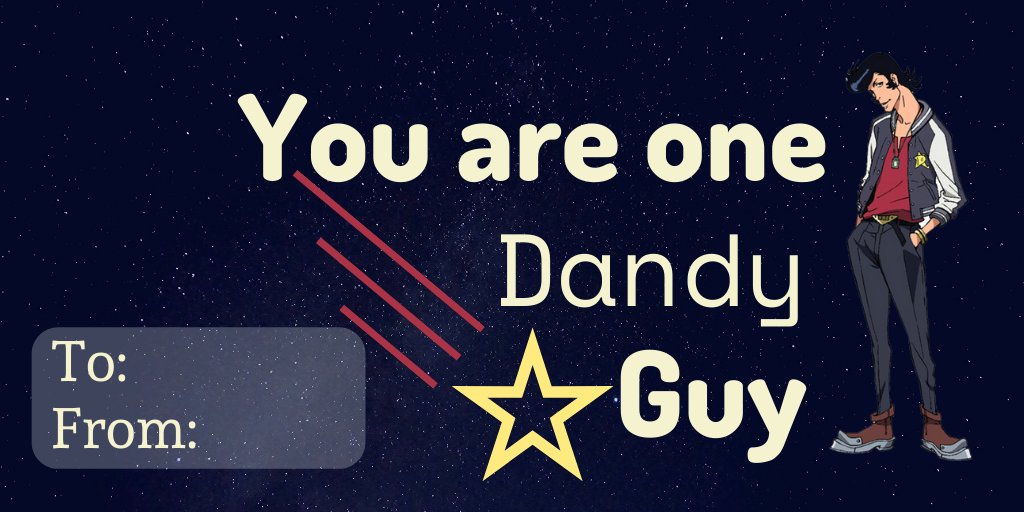 Another easy concept once I thought to do it. MAL proved an invaluable resource as it gave me inspiration for several of these cards along the way. You try making a ton of original Valentine’s day cards that aren’t overtly sexual or meme-filled, it’s harder than it looks!

Anyway, I think I captured the essence of this one pretty well. A lot of fine-tuning had to go into making this one not look crowded, so hopefully all that effort was worthwhile. Scott liked it, so I feel like others will too. 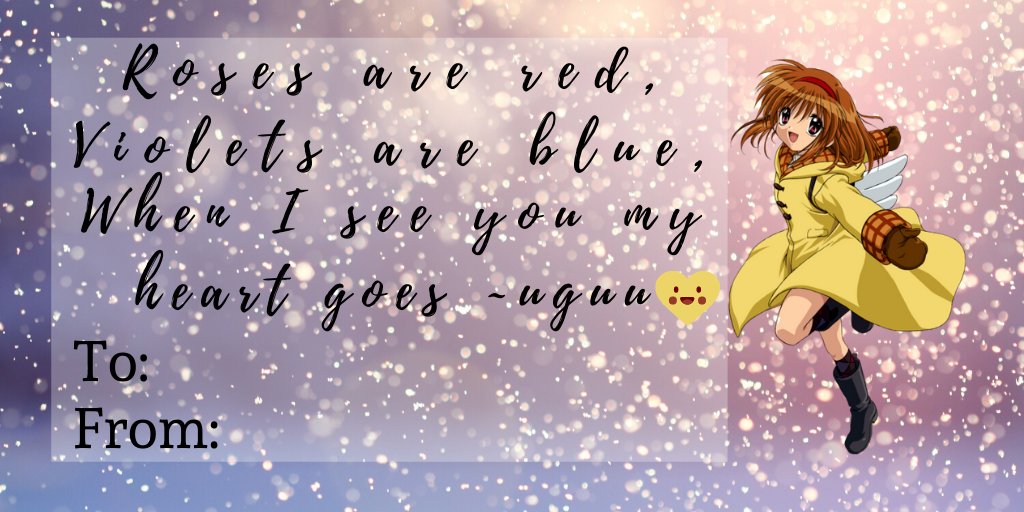 I realized as I was wrapping up that I did not write a traditionally corny Valentine’s poem. I am so sorry for resurrecting the monstrosity that is “~uguu”, but it could not be helped. Sincerely, I hope you enjoy this one, it makes me laugh even if it’s very cringe-y.

That’s it folks! Hope you have a nice day. You can find all of these cards to share easily on my Twitter or by downloading the PDF version here (if you want physical versions for some ungodly reason, but please note they are in dimensions for Twitter so you made need to resize). Thanks for stopping by and consider becoming a Patron or making a one-time donation by hitting the buttons below!