When Life Gives You Lemons… 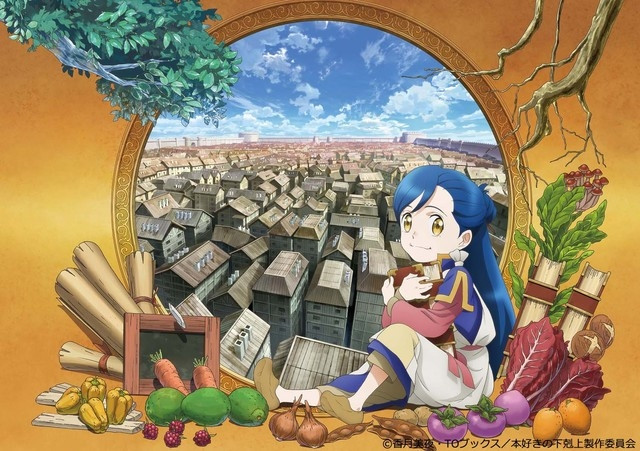 Pursuing your passion can seem like a daunting task, sometimes, it can even seem impossible to achieve. Such is the case for Urano Motosu, a young woman who dreams of being a librarian. Unfortunately for Urano, her life is cut short in a somewhat ironic twist of fate (crushed by her own weighty collection of books), but this is not the end for her. Instead, she awakens in the body of a young girl, Myne, in a world where books are seemingly out of reach. Thus Myne has to overcome innumerable obstacles all while trying to adjust to her less-than-ideal life.

When I say “young girl”, I mean it. Myne is a sickly and frail child who’s only five at the start of the story. Not only that but she belongs to a poor family in a medieval-like society. For an isekai story, something that generally focuses on reincarnating are protagonist as more powerful versions of themselves, it was refreshing to see our heroine thrust into such a helpless position right away.

Ascendance of a Bookworm is not the first anime to do this, just take a look at Re:Zero for example, but it’s the first I’ve seen where we’ve had a protagonist so severely disadvantaged, not to mention starting off so young. As a result, Myne’s dream of reading books and running a library seem next to impossible in this new world, but she’s just crazy enough to try anyway.

Often this series is criticized for being slow, resulting in an uninteresting watch. I can’t help but disagree with this sentiment though. Myne is a literal child, and one who can’t accomplish much on her own. Partially because of the fact that she is a child, and the fact that she has a sickness known as “the devouring” as well. That’s why when she finally does achieve something it is so meaningful. It also has the happy side effect of building up the rest of the cast, most notably Myne’s family and Lutz, a young boy who aids Myne in her antics.

In a way, this creates a feeling similar to Log Horizon or even the more recent Dr. Stone, but at a much smaller scale. Seeing the small improvements Myne affords the people in her life, and how in turn, they end up helping her crawl toward her goal is incredibly rewarding.

If you’ve ever tried your hand at a creative task before, you’ve likely felt these struggles. It can be so difficult to know how and where to start, whether you are a writer, artist, or what have you. Often you need to rely on others to help propel you forward, that knowledge and assistance is vital in making progress at improving, and eventually, reaching goals that you set for yourself.

It’s easy to feel discouraged when things don’t go as planned when trying to tackle your dreams, which is what makes Ascendance of a Bookworm such a worthwhile watch. It’s a nice reminder that hard work and dedication goes a long way in accomplishing anything, but it also reminds us that these things alone are not enough.

Which leads me into the other great thing about the anime, and that’s the emotional beats. At first, Myne doesn’t care for this new world, nor the people in it. They are dirty, unfamiliar, and so far removed from what’s she used to that it isn’t difficult to see why she doesn’t even try to connect with them initially.

However, this all changes as the series goes on. So much so, that there are some fairly strong moments where you really get to see the growth Myne has undergone. When she finally tells the whole truth to Lutz or when she chooses to stay with her family over potentially dealing with her illness, these are moments that emphasize the importance of these bonds while making the Bookworm that much more meaningful as a result.

Despite my praise, the show is far from perfect. While the more relaxed pace of the series is generally a benefit, it can make some seems feel superfluous or drawn out. This mostly has to do with the fact that this season was only 14 episodes, which just barely scratches the surface of how the world really works, the key players in the story, and ultimately where this series wants to go.

Thankfully, we are going to see another season fairly soon, but it’s unclear just how much of the story well actually end up being adapted. If this is a show that gets to see things through to the end, Ascendance of a Bookworm is more than welcome to continue taking its time, but if not, things are going to need to shift slightly moving forward in order to cram in all the ideas that are seemingly still left on the table.

Additionally, Myne herself is not the best character. While it’s true she’s been given the body of a five-year-old, her mind is still that of an adult. Though, you could forget this in some scenes since Myne makes some bafflingly stupid choices. It’s not a deal-breaker personally, but I have heard this complaint leveled at the series, so it’s something to keep in mind when going in.

I’m able to give this some leeway because she is having to blend into this new world and does lack legitimate knowledge about a lot of its workings. Myne being so young benefits the story as it gives an excuse to have very basic things explained to us organically, but it still does clash with this idea that she’s actually adult-minded from time-to-time.

Putting aside these concerns and gripes, I do recommend Ascendance of a Bookworm at the end of the day. It’s got charm and appeal that, if given the time it needs, grows into a worthwhile story that is sure to be relatable to just about anybody. Having that added appeal of creating “new” things while going through the whole process, something that seemed fairly popular of late, is also a nice bonus if you are craving more of that as well. Looking forward to what season 2 has to offer.

What were your thoughts on Bookworm? Any predictions for the kinds of things we might see in the second season? Let me know your thoughts in the comments below. If you would like to support my work, you can do so via my donation buttons below. Thank you for reading and I’ll look forward to seeing you around here again soon!

9 thoughts on “Ascendance of a Bookworm – Overcoming Adversity”