This was meant to go up at the end of November, but I had some other content I wanted to get to you guys first, so this ended up coming just a bit later. Anyway, today we are going to talk about Phase 2 and how things kind of backfired on me. If you have no idea what I’m talking about, you can read about the end of Phase 1 here to get up to date on things. This isn’t something I’m really excited to talk about, but let’s get to it.

Here’s all the stuff I planned on doing and how it turned out, you’ll find that a lot of it just didn’t happen. I’ll explain in detail as to why, along with all the details.

As you can see, pretty much all of the items on the “Phase 2” list failed.

One of my major goals was to start recording some video content. I was generously donated some cash to buy some basic equipment, and was really quite excited to get to producing it. That’s where a lot of complications came in…

The first of which was the studio mic that I bought. It’s meant to clasp onto your desk, you’ve probably seen tons of these in YouTube or Twitch videos. Mic is great, sounds great, and I like it. However, the problem is two-fold:

Basically, this killed a lot of enthusiasm right away. Still, I did attempt to power forward. After all, I had a lapel mic still along with my phone stuff. Not to mention, my recording and editing software.

Unfortunately, life had other plans for me. Almost the entire month my family kept demanding things of me along with my church. I did not have much free time, and when I did, I was just too exhausted to actually work on anything. My grandmother has been complaining a LOT about my income, the whole point of this project is to address this, but it seems nobody actually wants to give me any time to address it. I can’t solve a problem for myself if I’m always doing things for other people.

It’s important to note here, that I did record some stuff. Despite everything, I forced myself to start recording a video game playthrough for Yoku’s Island Express. The game is pretty cute, being a mix between a traditional metroidvania platformer and a pinball game. Sounds cool, right? Well, I hit another snag…

Turns out my computer just sucks. I got a new one not too long ago, and even though it isn’t as strong as my old one, I thought it would still work alright. Not the case. Did get some Twitter help from Purple to at least to basic recordings for this game, but this meant that Twitch and anything else was really out of the picture.

Allow me to put this into perspective. Games ran fine, so long as I used a controller. However, the minute I needed to use a mouse, it was a slow and sloppy process. It just wasn’t watchable. So, what happened with this playthrough, which I did record.

Two additional problems sprang up. One was somewhat expected, while the other wasn’t. Let’s get a quick overview of those:

The first point is pretty straightforward, I don’t think I really need to go into that more. Point two, on the other hand, does warrant some more explanation. In case you don’t know, videos require two steps:  encoding and uploading.

After editing a video you need to encode it, basically, turn it into the completed file that goes up on YouTube. For most people this is still a decently time consuming process, even on more powerful machines, but we are talking maybe a few hours at most. Not me though, this would have taken my computer 3+ DAYS to encode a single 20 minute video. During which time, I can’t use it for anything else. Yeah… not gonna happen.

Assuming that step didn’t fail so spectacularly, I would need to upload videos. My mom has decent internet, so I was just gonna use her’s. That meant that I would have been uploading on weekends, but scheduling videos out for later. This would have worked, but would have been really annoying.

Ultimately, video based content is just not in the cards. I need to abandon that idea and not waste any time on it. This is not all bad though, it is important to recognize when something isn’t working so you can move on and adjust faster. This is the point of the process we are in now, The Adjustment Period.

Moving on, we have the podcast type content on hold. I do actually want to do this, I’ve just not been feeling well, my voice not being 100%. It didn’t help that during the initial period, I was constantly being interrupted by IRL stuff. This is actually setup though, you can find where my podcast can be on Anchor here. After a little more rest, I am aiming to have this officially started by the end of December. Apologies for the delay, it just isn’t a good time to record these right now.

I would like one thing from you guys on this though, and that’s a gauge of interest. The idea is a monthly, with the aim to become bi-weekly or weekly, update type podcasts where I talk about the things going on with me. I would cover the anime I’m watching, games I’m playing, etc… basically all the stuff that just doesn’t make the cut for the actual blog, while keeping you informed with my life.

These aren’t going to be super fancy, just me talking. Maybe a guest from time-to-time, but overall fairly informal and fun. Episodes should go out on the Friday slot, but I would like to hear from you. Let me know about the frequency you’d want to see, if this content sounds good, and if you even want this at all (why waste my time on it if none of you want it, right?).

My Expansion, Into the Woods… Evolutions 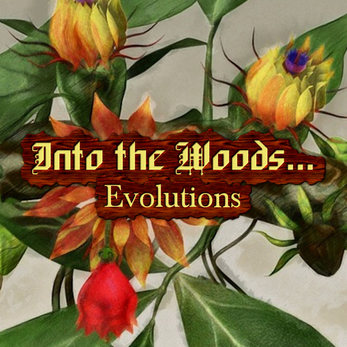 Some good news! I actually got this fully completed. You can check it out right now by following the link here. Here’s some quick info on it for you though:

The forest grows restless. Witch each passing season the once familiar woods have warped and changed beyond recognition. This does not concern you though, as you will continue on as you always have. Working tirelessly day in, and day out… and too, this dreamlike woodland will as well.

Into the Woods… Evolutions is a small expansion for the free solo tabletop role-playing game Into the Woods… by Nathan Mehlhorn. The base game is required to play this expansion (compatible with Version 2.2 and later). You can get that here.

This expansion will add even more variety to your games, allowing for more interesting stories to arise, and includes a few peaks into the next expansion I have in the works:  Into the Woods… The Changing Seasons.

There is a small $1 cost to the expansion, the explanation for which is found on the page for it. I hope you’ll check it out, and if you do, please let me know how you enjoy it! Leave a review on the site and consider leaving a comment as well. Thanks in advance!

Truthfully, this was always an iffy prospect to begin with. I’ve taken the steps to get this in a position to be started, but starting it just hasn’t happened. Again, this has a lot to do with these real life demands that keep preventing me from pursuing this stuff. Realistically though, this is a completely scrapped project. I just don’t have the energy for it solo.

It’s an adjustment period now. A lot of my plans aren’t going to work out so I need to mix it up. Here’s what I’m thinking:

We’ll try this schedule out for December and probably January. If this needs adjustment, then that’s when I’ll look into making some. Remember, the goal is to work up to consistently earning $100 a month within 6 months as of the end of November, so the clock is ticking!

You can help me out by using my donation sites. Just click the buttons below for more info. Thank you very much if you choose to support me, and of course, thank you very much for taking the time to read this today.