At One Point, I Dreaded Watching Each Week

I’ve been putting off writing about Demon Slayer because it is a really popular show, but one I really struggled with watching. Don’t get me wrong, the visuals are amazing, it has excellent music, and there are moments of brilliant direction. However, all of that doesn’t mean much when the show has an unlikable cast and problems with its writing. If you can look past that, it’s probably going to be one of the best anime of the year, but for me… Demon Slayer just falls incredibly flat.

Everything started out well enough with Demon Slayer, our main character, Tanjirou comes home one day to discover that his entire family has been slaughtered by a demon. All except for one, his younger sister, Nezuko. Unfortunately, much to the horror of Tanjirou, Nezuko has become a demon herself. Thus, he vows to take up the blade and join the Demon Slayer Corps in order to prevent further tragedies like this, and to discover a way to recover his sister’s lost humanity.

That’s a good start to a story as it offers plenty of intrigue and has the potential to offer a lot of exciting moments. For a time, Demon Slayer delivers in this department with slick action and a cast you want to see succeed. Even when things fall apart, Tanjirou and Nezuko remain likable.

I’m getting a bit ahead of myself though. The series does do a lot of things right and sets up for most things to come into play as one might expect them to. Visually, there is a lot to like about Demon Slayer and the music is just as good. It’s a fluid and pleasant experience that is sure to offer plenty of hype moments in the more climatic moments of the show.

The first few arcs are also really interesting to watch. They start showing the issues that will be present later, but it’s super easy to look past these initially because it really is just that engaging. One of the things that drives this is how Tanjirou is written.

While he does kill demons, using violence to solve problems to that end, he isn’t like the others in the Demon Slayer Corps. He has a real compassion for his foes, the violence he employs is merely the only way to bring peace to the endless suffering of the demons. Acting not out of malice or disgust for the demons, but because he understands them thanks to his sister. 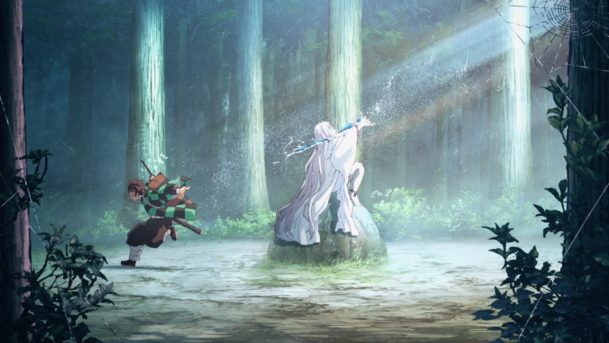 Thematically, this is a show about forgiveness. It’s not like a lot of other shows in this general space in that way. I have to give Demon Slayer respect for this, because it really is one of the more interesting aspects to the anime.

All that said, even in these earlier episodes of this anime I could feel that there was something just a bit off when it came to its writing. This is one of the two major issues with the show as it impacts the pacing and cheapens some of the, otherwise, fantastic moments offered here.

The other issue is in its remaining cast members. Even as early as Tamayo, problems begin to emerge. Most of the cast is just terrible and obnoxious. Namely, Zenitsu (Dorito Boy), and Inosuke (Boar Dude). So much of the show is devoted to watching these characters scream and yell, complaining about this-or-that, to the point where even Tanjirou makes this face at all the nonsense: 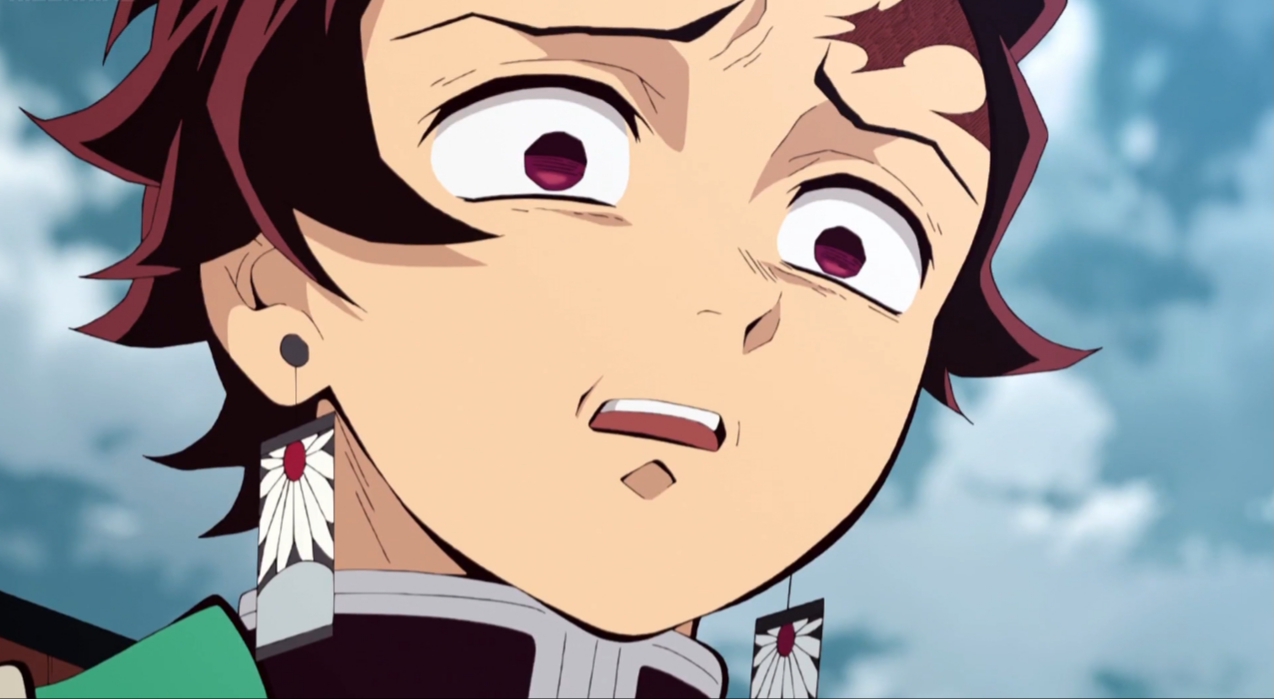 Each episode with these characters began to wear at me. Dorito Boy is one of the single worst characters I’ve seen in a modern anime in a long time. I don’t care that he has a few cool moments, or that he has a sympathetic backstory, he’s just annoying. Even Grape Juice from My Hero Academia is a character I like more, and that’s saying something!

Boar Dude isn’t much better, but he is made only worse by Dorito Boy. Together, the antics are just too much. It lead me to the point where I actively wanted to avoid finishing the series. I only powered through it for the promise that it would get better, that maybe the seemingly endless adventures of “The Three Stooges” would finally end.

While I’m on this note, Demon Slayer has a surprising amount of downtime. I didn’t do all the math, but it certainly felt like I spent a good portion of my time watching the characters do very little. Meetings about this, recovering from that, training montage, but the actual plot seemed to take a backseat more than it should have.

At least things picked back up again when it came to The Mountain Arc. A lot of the focus was given to the demons and Tanjirou with only occasional jumps to the obnoxiousness that proceeded it. This leads us to episode 19.

For many, this is probably the single best episode of the series so far. It was good enough to get Demon Slayer trending worldwide on Twitter, introducing a lot to the show. That’s awesome! I don’t want what I’m about to say to take away from that, but I actually take some issue with this episode.

Up until this point, I haven’t really focused on giving concrete examples of what I find lacking with Demon Slayer’s writing. That’s because I really wanted to talk about episode 19 and the proceeding events to demonstrate them where they are a little more obvious and clear to explain.

In said episode, Tanjirou is fighting a very tough demon and is on the brink of defeat. That is, until he randomly remembers some pretty critical information about his dad and learns a magic (and later you learn, forbidden) technique that allows him to power through the situation.

Nezuko also gets to summon a new power, seemingly at random, but in her case I can forgive that because the show actually took the time to explain that demons can eventually manifest certain powers. In Tanjirou’s case… not so much.

The big sin here is that Tanjirou’s father isn’t even really mentioned until this point in the series. There is this thing about his earrings that Tanjirou has early on, but he really isn’t given much attention beyond that. Compared to the rest of the family members, the father seems to be largely unimportant outside of Tanjirou wanting to remember him by the heirloom.

That’s why when he suddenly becomes vital to the plot in episode 19 I just couldn’t care. It was visually stunning, the music emotionally resonate, everything screamed, “This is a really touching scene that should get you excited!” Except it didn’t. How could it? Demon Slayer  hadn’t done anything to earn this because it hadn’t bothered to write anything that would make this moment make sense.

I’m sure in the source material this isn’t an issue, but I don’t really know. Regardless, the anime didn’t do itself any favors by failing to demonstrate just how much Tanjirou’s father meant to him. To explore the connection they had, thus justifying the special technique when it comes up in episode 19.

Then the problems only continue. Turns out the Demon Slayer Corps has a pretty large cast of unlikable people, only few of which are tolerable. You learn that this organization doesn’t share information as folks try to kill Nezuko despite the leader of the group approving of the situation.

Even when this is physically said at a later date (not before a painful sequence that drags on where they debate just killing the pair), one member of the Corps still defies this and demands a pointless test. This decimated any image of structure or respect this organization should have.

Oh yeah, then you find out that this group isn’t sanctioned by the government at some point. The Demon Slayer Corps doesn’t have any real authority, and is breaking the law in some cases, even though people know demons are real. They aren’t some small issue, a LOT of people dying to demons from places big and small alike.

It’s not like the demon’s are any better. Their group is just as bad, but in that case I can kind of buy into it. The leader is crazy, relying on fear and an iron fist to keep his subjects under control. He’s manipulative, which makes the dysfunctional nature of this camp more believable. It also reinforces why such strange decisions get made.

You don’t really get to see this until the end of the show, but it was one of the better moments the series had to offer. When the demons are on screen, receiving most of the focus, Demon Slayer really is at its best. The rest of the time…

Not a big issue, but something I wanted to mention was I thought it was hilarious that Tanjirou has a great sense of smell. He seems to have the Grimgar power to find the path that will defeat his enemies, which just put the icing on the cake for me since I’m not a fair of that show either (though for totally different reasons). The smell power does cause some issues in the writing, but I think you get the point with everything above.

There’s a funny joke here but it’s a spoiler so… instead just enjoy the announcement trailer for the movie.

At the end of the day, I felt like I wasted my time with Demon Slayer. I enjoyed parts of it, and am still somewhat interested in the story, but the characters and issues with the writing prevent me from really wanting to continue. If the film is easily accessible, I might watch it, but unless that blows me out of the water, this is where I get off.

I’m sure you enjoyed Demon Slayer more than me, but did you agree with anything I had to say? I’d still love to hear about why you enjoyed it if you did. If you want to support my work please consider joining the Patreon family or making a one-time donation via Ko-fi by utilizing the buttons below. Thanks for stopping by and I hope to see you again soon!