When my buddy pitched Astra Lost in Space to me at the start of the Summer 2019 season, he described it as:

A space survival show with M. Night Shyamalan twists at every turn with a dash of comedy.

-My friend (who also read the source material before watching)

While I don’t think this is really an accurate description of the show, it feels more like Star Trek with a deep mystery running through it, I can now see what he meant. If you would have asked me what I thought the best show of the season was going to be, I probably wouldn’t have picked this one either. However, here we are.

Let me first preface this by saying that I was not able to watch every show of the Summer 2019 season (nor did I want to). Shows like Takagi-San season 2, Fruits Basket, Vinland Saga, or even some of the shows that have yet to finish, theoretically could have ended up sitting in the position of “best of Summer 2019”, but I haven’t watched said shows. The ones that have yet to wrap up, unless they have really amazing endings, aren’t likely to touch this either.

Astra Lost in Space starts off with an hour long episode that has some humor, drama, and most importantly, establishes the core premise/mystery right away. It doesn’t feel too long, and the initial 9 character cast is given enough time to get itself established.

Taking place in the year 2063, space travel has become fairly routine. As such, a group of high schoolers, and one 10 year-old, are about to embark on their first journey into space alone as part of a school exercise. It’s basically a fun summer camp scenario. However, things quickly go wrong when the group is sucked into a mysterious ball of energy and spit out far away in the dark vastness of space.

Thankfully, the group survive this against all odds and find an old abandoned spaceship. Now they just need to get back home safely. The old ship isn’t much, but by hopping from planet-to-planet they just might all make it. There’s only one problem, it is quickly revealed that this may not have been just some accident, in fact, it is all but certain that one of the 9 crew members is a traitor!

This show has a lot going one, with a lot of moving pieces. If you are into solving mysteries and want several twists along the way, Astra is going to more than deliver as long as you stick with it.

I preface this, because the show actually does start a bit slow. The “power of friendship” thing runs pretty deep, and it kind of does this red herring thing with its tone. It comes off as a campy comedy with some adventuring through space, but once things kick into gear, it manages to strike a healthy balance across its 12 episode run.

Speaking more to the plot in any specifics would kind of ruin the show, I really do think this is best as a blind experience, but I do have some general comments that may be of interest to you. As you likely know, I am pretty into real mystery shows so I should at least speak to the relative difficulty and execution overall.

For Astra, there is one big mystery that develops into several smaller ones. Each of the small ones helps solve the larger mystery, and most of them are perfectly solvable if you are paying close attention to small details. It isn’t so granular that you need to freeze frame on the animation, but if you pay attention to how scenes are presented and how characters act, most of the stuff is rather intuitive.

That said, there were a few twists that managed to slip by me. However, they were relatively minor ones that I was actually skeptical of on their reveal. I’ll tell you right now, Astra is never going to lie to you, and truthfully, it doesn’t even really try to mislead you. It may be surprising to hear, but there really isn’t much misdirection, I’d even go as far as to say that there isn’t any at all (outside of the traitor, who for obvious reasons, does attempt to do this).

I don’t want to claim I had the entire mystery solved before the end, but I’d say I was roughly 80% accurate. The traitor was a very early call, but the reasoning behind the broader mystery, while something I mused at, was not what I would have called. Additionally, one character connection towards the end just didn’t click for me before it was revealed, but I consider this “twist” so minor that it didn’t impact my general hypothesis.

While I had my initial grumbles about some of these revelations, when it all came together, I have to say that it was well-thought-out and cohesive. There is a little niggling complaint when it comes to one specific element of the ending, but nothing that fundamentally ruins the show. Quite the opposite, Astra Lost in Space is probably the tightest show, taking full advantage of its runtime to come out in a good while. I haven’t felt this level of narrative cohesion and genuine intrigue since Stiens;Gate or Higurashi.

Beyond the mystery, I have to say the adventure side of things was fantastic. The planets had a fairly decent level of variety, ranging from (mostly) peaceful to harsh environments. The alien foods looked great too! Furthermore, the characters really came into their own form planet-to-planet, giving every single crew member plenty of time to become a fairly fleshed out character. 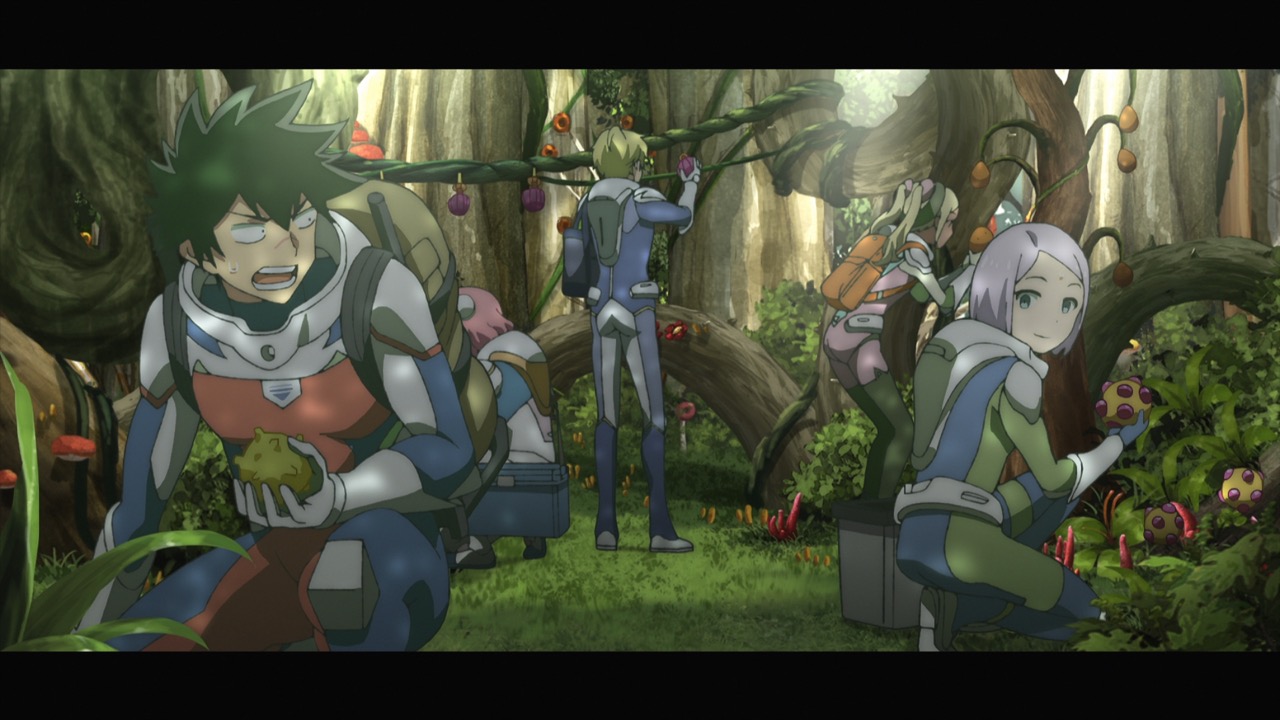 Out of the 9 crewmembers, Funi, the 10 year-old, is the only one who doesn’t get that much development. Even the side cast, the parents of these children, are given a fair bit of characterization through some clever methods connected to the storytelling. Even when a totally new character is brought into the show fairly close to the final few episodes, they don’t feel forced or underutilized. While they are lacking in some depth, the narrative weight of this individual more than makes up for it.

Conclusion wise, it felt like the show was taking a flashy victory lap with another hour-long episode. However, Astra certainly earned it. While I’ve seen some folks argue that it was too campy, sappy, ideal, or what have you, it didn’t feel unwarranted. It’s true that Astra has its cake and eats it too, but sometimes a show can get away with that, and I believe this is one of those cases.

Be sure to turn on the captions if you want English subs, this video has them.

In a word, Astra is satisfying. It has a little bit of everything for just about everybody. I can’t recommend watching this anime enough, it really did go above and beyond when it came to my expectations. I thought this was going to be fairly goofy with some melodramatic moments, but Astra escaped all the common pitfalls it could have easily fallen into.

What are your thoughts on Astra Lost in Space? Try to avoid spoilers if you can for folks who haven’t seen it. I’d love to know how many twists slipped by you and if you managed to solve the mystery before the end as well. Enjoy my writing? Consider a donation by hitting my Ko-fi button below. Thanks for stopping by and reading, I hope to see you again soon!

16 thoughts on “Astra Lost in Space – Best of Season”