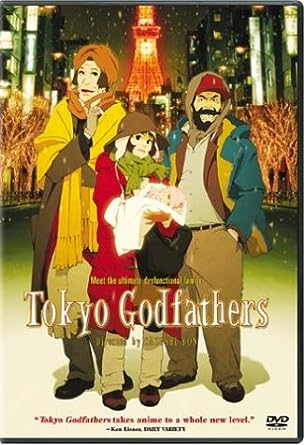 If there is one person I’ve wanted to talk about for some time now, it’s the late Satoshi Kon. I’ve seen nearly all of his work and it is something that is certainly worth talking about, but finding the words hasn’t been easy. However, you guys voted and here we are today to discuss the 2003 film Tokyo Godfathers. If you are here just looking for a recommendation, you have it in full. This is a great movie to watch whenever, but especially around Christmas time. You can find the film pretty easily and legally, so go out and watch it.

For everyone else who is still here, that’s probably not going to cut it. Sitting squarely in the middle of Kon’s directorial career, Tokyo Godfathers is unique as it standouts from his other movies and television show. Most of those are these surreal pieces that explore various aspects of the human experience filtered through a darker lens of a more macabre nature. This isn’t to say they didn’t yield positive outcomes or messages, but they did act to make the viewer uncomfortable. Here, this isn’t really the case. There is still this dark sense of humor that runs through the film, but really this is about as traditional of a positive Christmas-type movie as you can get. Well, at least for Kon, because as I mentioned, you can still really feel his style and influence throughout.

Tokyo Godfathers is about the journey of three homeless people who discover a discarded baby in the trash on Christmas Eve. They then try to find her home, and the adventure that ensues makes for one crazy night! Though the road is full of hardships, even miracles are possible on Christmas.

You have Hana, a trans woman who is probably the nicest of the trio (more on her later). Gin, a family man who cares for his daughter but due to his problems with alcohol and gambling left his family behind. Finally, Miyuku, a runaway who the other two try to convince to return home throughout the film.

Getting into more than that would spoil a lot of the movie, but what you get from these three is a journey of redemption. It’s a happy story, even if there are lots of unhappy events that occur within the film itself. Explaining it is kind of weird, which is why, again, I implore you to just experience it for yourself.

Kon’s films are transformative when it comes to viewing what an anime can be, and what it can do. He truly was a gem in the industry, which makes his death in 2010 all the more tragic. It’s also why I’m having such difficulty in talking about the film because I really don’t want to defuse the magic you get from a blind experience.

Still, I suppose I should talk about Tokyo Godfathers in a bit more depth than this. The film certainly deserves it. From here on out though, I really can’t avoid spoilers, so please keep that in mind as you proceed.

Homelessness is a big problem, even outside of Japan, but one thing I find the film portrays particularly well is just how difficult it is. Especially as a snapshot of the time in which the film was created. There is a brutal scene later in the film where Gin is beaten by some teenagers. You may have seen this in other anime, but this harassment and abuse was all too common.

In the midst of the broader message that impacts the individuals of the narrative, this kind of pointed social commentary that highlights the issue in a real way is something I’ve come to respect about Kon. You see this most heavily in Paranoia Agent, his only television series that would come later in 2004, but you can see this in his other stuff too.

Even from the first scene you can see this being developed. The Christmas play and sermon that none of them really care about, but the meal after is just too good to pass off. Something you may not be aware of is how religious groups really target these individuals. It’s really easy, they are a captive audience after all.

This is extra true around a holiday like Christmas. Now, I’m not meaning to imply this is done out of malice or any such thing, but I’ve noticed in my own community at least, that often folks really “become passionate” about this particular population around this time. However, this quickly evaporates and we return to a status quo.

All the homeless and needy we brought in are slowly driven out for one reason or another. It’s kind of a garbage thing to do, right? Though, I believe this is all too common. Providing temporary aid just to put ourselves at ease, only to ignore the root issue and pretend as if it isn’t a problem a short time later.

Sorry for getting off on a tangent like that, but it is something to think about… or rather, something the film gets me to think about. To think, this is only the first few minutes of the film as well. I’m not kidding when I say that even Tokyo Godfathers is a dense work, but this extends to anything Kon produced.

Back to Hana. I said we’d get to her, so now is a good time for that. Some people may find the lack of, let’s say, fidelity in the handling of this character a problem. However, I don’t think that is really fair to the film at all. For the time, and ultimately just how important Hana is to the film itself, it was rather progressive if anything.

Now this doesn’t excuse the issues, but context is important in any discussion. Homosexuality, and especially trans folks, have historically had it particularly rough in Japan. To make one of your main characters, especially one that drives a lot of the plot, fit into this category is a bold choice. Occasionally her nature is played for laughs, but most of the time she’s presented as a very human and, frankly, normal character. Which is just how it should be.

One of the jokes that strikes me as rather funny that involves Hana is when she tells a woman at the homeless event where they serve food that, “she’s eating for two”. It’s a coy little moment but it gets brought up again a short while later when the same woman sees them after finding the baby and proclaims, “She really was eating for two!” in utter disbelief. Most of the jokes are things like that, but keep in mind that some things aren’t as tactful is all. Don’t let that ruin the movie for you.

Speaking of humor, let’s talk about that! Man, this movie is pretty dang funny. One of the best aspects of all these jokes is how it ties into this idea of fate. Often, as if guided by some invisible hand, whenever the trio need something for the baby it just works out. Some my point to this as lazy storytelling, but it really does work here.

Beyond that, there are actual jokes too. Most of which land exceptionally well. Take the dying old man and the pinwheels for example. That’s probably the most famous example. Anyway, in the scene another homeless man is on the verge of death and the whole time it cuts to these pinwheels going to town outside throughout the conversation. Then, the man “dies” and it cuts to the pinwheels stopping. However, the man sputters back to life once more.

A video from the YouTube channel “Every Frame a Painting”, they sadly don’t make videos anymore but it discusses the pinwheel joke and other notable techniques Kon used. It does have minor spoilers for ALL of his work though, so keep that in mind.

It’s not a wholly original joke, and of course explaining it here doesn’t do it justice, but this subverting of expectations is fairly common in the film, even outside of the humor. Combining the visual storytelling language and shorthand which most of us are familiar, at least on a subconscious level, with everything else is always a welcomed technique. It’s no exception here.

That said, the absolute funniest thing about this movie to me, and also my favorite part is toward the end of the film. Things get kind of crazy and a woman is about to kill the herself and the baby when the baby looks at her, and says “I want to go home.” It’s a subtitled line, even though the baby is just making baby noises. It is so funny to me because of how unexpected and well timed it all is. I doubt you’ll find it half as funny, but it really makes me laugh!

This is one of those overly hype DVD trailers, but it’s the only one that really exists online so it’ll do…

I know this wasn’t the most focused write up, if anything it was just as meandering as the film is itself! Still, it was really nice to revisit Tokyo Godfathers. I hope you enjoyed reading this. I’d like to review Kon’s other work but maybe when I have more time to really put a lot of thought into it. Anyway, give this one a watch when you have the chance, at the very least, it will be an interesting one!

What is your favorite work of Kon’s? Did you enjoy this film? Let me hear your thoughts in the comments. If you enjoyed my writing please consider a donation by clicking the Ko-fi button below as I’d very much appreciate it. Finally, thank you so much for reading and I hope to see you back here again next time!

24 thoughts on “Anime ABC’s T is for Tokyo Godfathers”