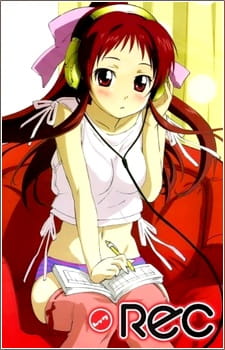 The other day I was listening to Digi talk about his favorite OP’s on YouTube when he reminded me that Rec existed as an anime. I was in the mood to watch a romance show, and at only 9 episodes, each really only ~12 minutes apiece, I decided to give it a watch. It’s a Shaft production and I had some expectations for something interesting, so, was it?

Since this one is real short, I can’t talk about it without spoiling some parts of it but I’m going to mostly just talk about the first episode here. The setup for this one is that main character, Matsumara, a salary man, gets stood up for a date at the movie theater when a young girl, Aka, bumps into him. After a cute exchange they decide to watch the movie together where we learn she is an aspiring voice actress who wants to be like her idol, Audrey Hepburn (this is a super important detail). They then go home, only to discover they were practically neighbors.

They part ways, but their story doesn’t end here. After all, this is your typical boy-meets-girl story where her house burns down so you invite her to come and live with you. Then, you of course have sex together only for her to get cast for your company’s new mascot. Oh, but they definitely aren’t dating!

I decided to watch Rec for tonight/tomorrow. It'll probably be Wednesday's review since I didn't really have anything planned for that slot. 1 episode in. Kind of mediocre for a Shaft show but the girl is cute at least.https://t.co/WZpIgte3c6

I also tweeted about the show as I watched it, so if you want to check that out I’ve included it above as well.

It’s an unusual setup for sure, and actually one of three things that put me off when I started watching Rec. Perhaps the best way to summarize what I mean exactly is that it felt unnatural. Matsumara and Aka have excellent chemistry together, even from scene one, but how they are ultimately brought into the main scenario feels forced at best.

To this point, I do want to mention that it does end up playing well into the main theme of the show. Sometimes an event that may seem bad can turn into a run of unexpected happiness. Lately this is a message I’ve been encountering quite often in anime, and one that I connect with. Additionally, it really shows the value of having someone who believes in you.

However, I still need to mention the remaining two things that put me off. Number two was the fact that Mastumara’s lecherous behavior. Listen, I don’t read romantic situations (especially) well, but even I can read the mood better than this guy. Part of me thinks this is meant to be funny? It just isn’t though.

I want to clarify that Mastumara is an nice, and well meaning guy, but this one aspect of his personality just didn’t blend well. Partially the runtime is to blame along with the sheer amount of repetition they use in repeating this “joke” in the anime. Not a deal breaker, but it did bother me while watching Rec.

Finally, for a Shaft show, there isn’t really a lot going on visually. It’s actually quite a shock compared to other projects they’ve done, even ones of a similar caliber. There is the occasional moment where I really could feel the distinction but most of the time this felt like this could have come from anywhere.

I didn’t have a good way to bring this up organically, but the opening, sung by Aka’s voice actress, Kanako Sakai, is really good.

Still, it had unique aspects. The eyecatchs each episode had were weirdly the best part of the series. Don’t know why so much effort went into them, well I say “effort” here, but I mean to say that they almost overshadow the actual content sometimes. Then you have the abomination that is the cat-tree mascot thing… Seriously, who thought that was a good idea?!?

Finally, this brings us back to Audrey Hepburn. Each episode is titled after a movie she appeared in, along with a quote that was relevant to the story. This was a neat detail and something that makes Rec stand out in a good way. While it might be kind of obnoxious to some that Aka does them so frequently, they really did add to the show, giving it personality.

Putting all that aside, when it came to the final episode I was satisfied. Rec was a bumpy ride but ultimately one that was worthwhile. I wouldn’t say it is going to blow you away, though it has done so for many, but at worst you’ll get a quaint little romance story that pays dividends by the end. I’d happily recommend it.

Now for some bad news though, you can’t legally watch this one anymore. I happened to have the opportunity, but I recognize that is a special case. However, I do happen to know these are archived on YouTube, so if you really want to watch it, at least you can. I’m not encouraging it, but…

I want to know, what are your favorite shorter anime like this? Maybe I’ll even check it out and give ya a little shout out in a review! If you’ve seen Rec let me hear your thoughts as well. Enjoy my writing? Consider clicking the Ko-fi button below and sending a few bucks my way, every dollar counts. Finally, thank you so much for reading!

8 thoughts on “Rec – Supporting Each Other”