Have you ever watched a show where the main character is supposedly some kind of genius or master at a thing, but the show kind of skirts around actually showing them, well, doing it? I hate that, and it happens a lot more often than you might think! Thankfully, some shows go out of their way to not only tell you these details, but show them as well. Today I’d like to celebrate two such recent examples I witnessed from the shows Waiting in the Summer and Hitoribocchi no Marumaru Seikatsu.

The first thing that needs to be said is that this discussion purposefully excludes shows like Rakugo, March Comes in like a Lion, or most sports shows. The reason for this is because those shows central conceits are specifically about doing a thing. It would be kind of weird if they didn’t show it, therefore, it isn’t a special case. 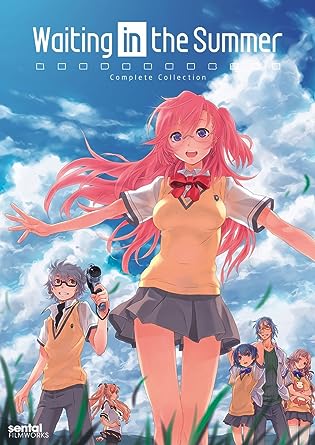 What sparked the desire for this discussion was when I was watching Waiting in the Summer (courtesy of Ayano, thanks!). The show is about a group of friends making a film for fun with relationship drama. Oh yeah, and there is an alien?!? It’s kind of like a mix of Birdy and Toradora!.

While I was watching they went out of their way to not only show you the film making process, but actually showing you (at least some of) the film itself. It’s the latter part that particularly impressed me. When I spend time with characters working toward a goal or doing a creative project such as this, I want to actually see the result of their labor.

By doing this, an anime is able to elevate itself because it is demonstrating proper understanding of storytelling and, if the viewer is invested, grants a decent payoff for following the journey. I still remember the Our Love has always Been 10 cm Apart and how it failed to accomplish this.

It isn’t always about a nice conclusion or big payoff, you can still add a lot to a show by including this concept at a smaller scale. Look no further than Hitoribocchi no Marumaru Seikatsu.

Episode 6 sees the main character, Bocchi helping her friend study by inventing “Bocchi’s School of Laughs” as a means to make learning more engaging. It’s a silly joke that runs the episode. At the end, Bocchi notes she made a school anthem and the episode ends. It’s funny enough on its own and I enjoyed it, but wouldn’t it be awesome if you heard the school song?

That’s exactly what the ED for the episode shows you. Now it isn’t a complicated song by any means, but by including this the episode was made all the better. Even as a minor one-off gag, by telling us that a character made a song, and then playing it, you get a similar kind of payoff I was talking about earlier.

Obviously these aren’t the only shows to do this sort of thing. I remember when Haruhi had that great concert episode, just as an example. Still, these moments add a lot to a show and I wish that more anime would take the time to show you this stuff. It’s an opportunity to build hype in the viewer and create a lasting impression.

What do you think of moments like this? Are there any awesome examples I didn’t mention here? Let me hear your thoughts in the comments! If you like my work and want to help me out, please press my Ko-fi button below to be taken to my donation page. Thanks for stopping by and giving this a read!

3 thoughts on “When an Anime Shows & Tells – A Discussion Ft. Waiting in the Summer and Hitoribocchi no Marumaru Seikatsu”