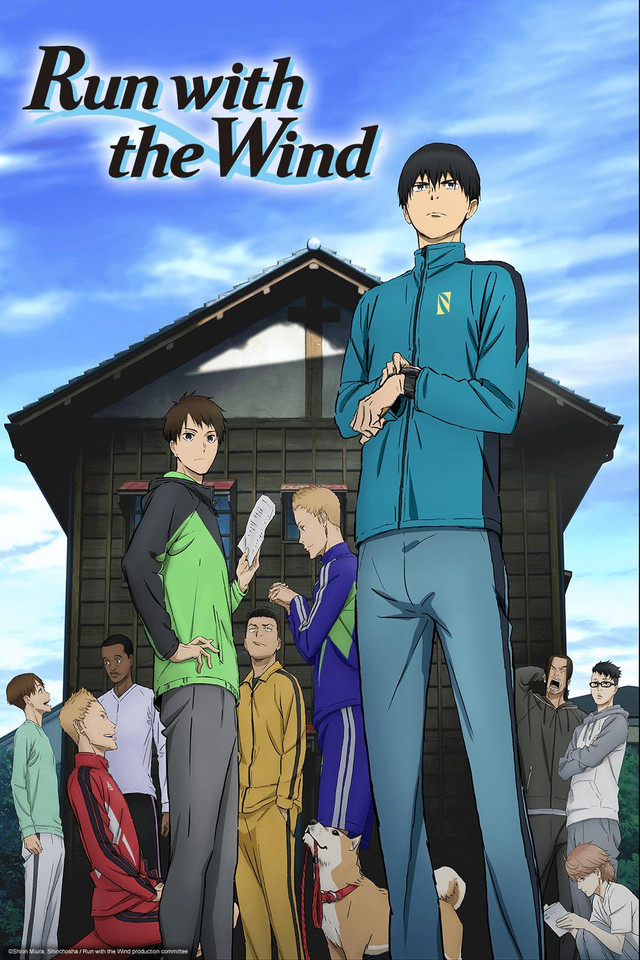 When Run with the Wind first aired back in the Fall 2018 season I almost gave it a pass without a second thought. That is, until I learned that it was based on a novel of the same title by author, Shion Miura. Why is that important? It’s important because I had watched an anime called The Great Passage which I had loved! Can you see where this is going? Yup, that’s right, it is also based on a novel by Shion Miura. I sat down and started giving it a watch only to put it on hold, the season was just TOO packed, until this series got chosen for the Anime ABC’s article series. So after the long wait, was it worth it?

To answer that question, I really do have to get into The Great Passage and why I enjoyed it. Unfortunately, this is one of those shows that got relegated to obscurity thanks to Amazon holding the streaming rights. Furthermore, it is a show about making a dictionary, which isn’t necessarily the most compelling subject at first glance. For these reasons, the show didn’t do very well but there was a vocal few who proclaimed its greatness.

At the time, I still had Prime so I decided to give it a chance. I’m really glad I did, because as I mentioned, I really enjoyed the show. Putting the premise aside, what The Great Passage is actually about is the power of words and finding your place. It’s a very human story that more mature viewers would find both moving and inspiring. I mentioned it in my Violet Evergarden letter that I could have easily said many of the same things I did for that show, with this one.

I wanted to link a particular video on the show, but it seems it has vanished from YouTube. Still, this one is short and gets the main point across so it’ll do.

Thanks to my strong, positive reaction to The Great Passage, I was confident that I would greatly enjoy Run with the Wind. However, my expectations were not really met. I have to, unfortunately, say that this anime was actually pretty disappointing. Before I get ahead of myself though, let me tell you what the show is about.

This time around Run with the Wind is about running, specifically the Hakone Ekiden, a BIG deal race in Japan. It’s super hard to get into and a lot of folks just never measure up. Furthermore, it is only for university students, which adds to how prestigious it is, and how difficult, it is to get into.

The catch? The show does not focus around an elite running team but instead around a very ragtag group of amateur runners. Well, mostly, there are two experienced runners in the group. The first, Haiji, who spearheads this whole scheme as it is his dream to run in the Hakone Ekiden. Second, Kurahara, who has been a very talented runner his whole life but due to circumstances got kicked off his previous team.

At first, everyone is hesitant to go along with Haiji’s plan but after awhile they do come around. This creates tension between the group and Kurahara. He does not consider this to be a serious group, nor does he think they will realistically be able to run in the Hakone Ekiden.

As the show goes on, Kurahara is constantly taunted by his rival, a student from another university who happened to be a prior teammate, which only acts to widen the gap between him and his new friends. So the question ends up being, can they all overcome these seemingly insurmountable odds, and in the end, does it even matter?

On paper this is a good setup for a show, and it does start off positively. The pacing is a bit slow, but after how deliberate The Great Passage was, I expected that. This time around you have a fairly large cast comprising of very unique individuals across all walks of life.

Theme wise, you are going to see content that isn’t too dissimilar to what you might expect. The irony of literally running from one’s past, self-improvement, etc… sometimes the execution on this is ineradicable, but it also falters just as much.

The initial conflict is uniting all of these people in order to form a team. This is interesting enough, but the only standout character during this segment is Prince. He’s so bad at running that you’d think the team would be doomed right then and there. However, Haiji assures everyone that he brought these specific people together in order to achieve his dream.

Run with the Wind gets particularly interesting in the middle section. You’ve gotten to know the characters fairly well and they are really starting to show improvement. It even seems like this is something they might be able to do, at least eventually. At this point the question of whether or not they’ll make it to the big race is irrelevant, it is now about the personal journey running takes each of the character’s on, and the growth they receive from it. How will they overcome adversity and thrive? It’s a good question worth exploring.

It’s motivating and inspiring to an extent. Prince is probably the biggest example here, because his growth is so visible. This character caught some flack for being an “otaku insert” character though, which I don’t think is a fair criticism. He hates running but only sticks with it because everybody (even some on the team) tells him he can’t do it. It takes a lot of work, and I mean a lot, but he does eventually get to a competent level.

To the point about being an insert character, that’s also one I struggle with really seeing as an issue. The show tells you that if you work hard enough, that you can improve yourself, regardless of abilities. However, it goes out of its way to tell you that hard work alone is not enough. You can push yourself to the limit and still never achieve your dream.

I was able to appreciate that, or that’s what I’d like to say, except the show contradicts its own messages sometimes. The team always seems to have success and very few setbacks, ever. For a show where overcoming adversity is kind of the point, it greatly diminishes the value of the message, for me at least.

Prince isn’t the only notable character though. Every character, except for maybe one or two, receives a dedicated episode to flesh out their reason for running. You get some backstory and it really adds to the show. Unfortunately, some characters get way more focus and attention than others and it does impact the final product.

Haiji gets an interesting story interwoven between a few episodes, but you never really get to see enough of his story to have much of an impact. A curious decision is made to make Kurahara the main character, even expanding his story beyond what the book offers, instead of Haiji. Had Haiji received more attention, I doubt this would be a noteworthy criticism but since there is obviously more story there, I would have liked to have seen it.

Now, I should clarify, you do see his story in bits and pieces. Enough to get the general picture, but going on his journey with him, especially as things take a slight turn in the second half, would have added a lot to the product.

It really isn’t until the second half of the show where the problems really start to stack up. The pacing was always a bit on the slow side, but it starts diving into things that either add very little, or just feel like a straight waste of time. It’s mostly during the race where things are padded the most, but it is a noticeable mark against the show. 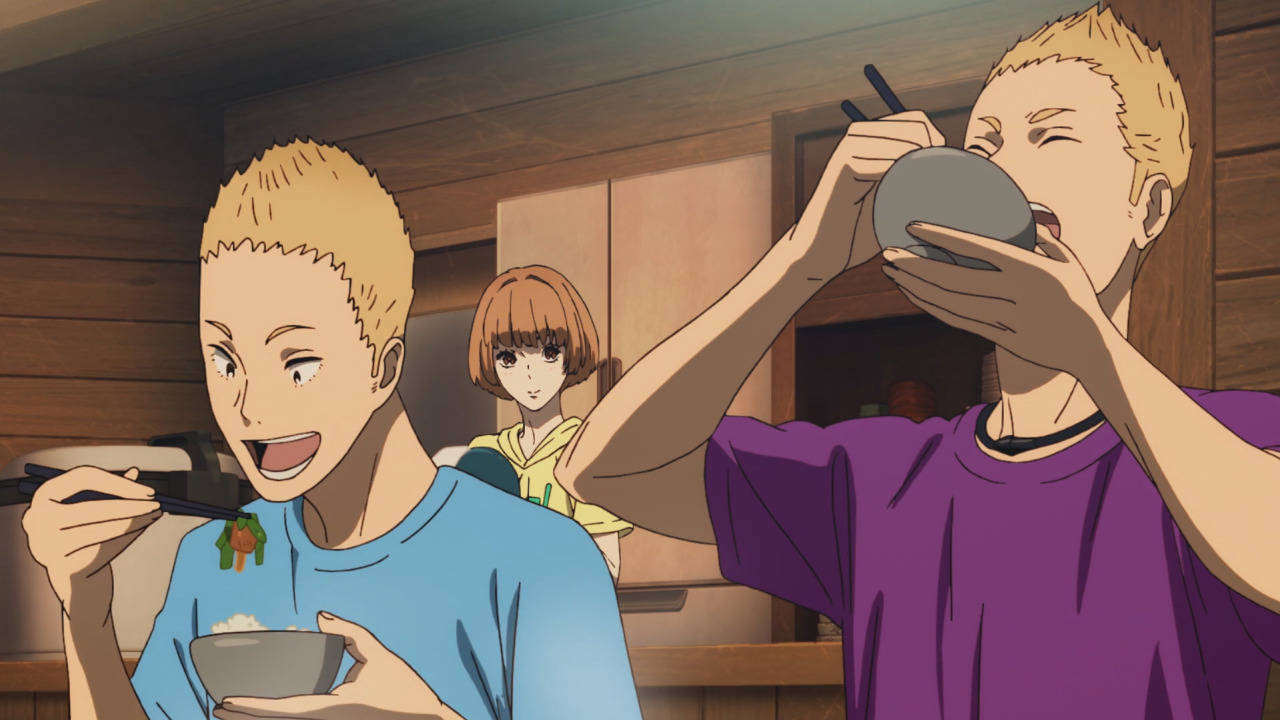 One of these plots is this love triangle that doesn’t go anywhere. It felt so juvenile and tacked on. Then you have this arc about the twin characters rehashing an arc we already had, right before the big race. It’s little stuff like that, but it makes this 23 episode series feel like it probably should have been shorter because it starts to feel a bit bloated.

Compare this to The Great Passage and its 11 episode run, which while still on the slow side, but is very deliberate, remaining focused. While Run with the Wind does have a decent conclusion that brings things together, even providing a decent epilogue, I found myself not caring much when things were all said and done. The story told wasn’t a bad one, but I walked away disappointed.

Despite covering themes I love seeing, being based on a book by an author I like, and having enjoyed the last adaptation of his work, Run with the Wind is something I can see why a lot of folks liked, even loved, but it was just missing some magic to bring it all together.

For whatever reason, this only has a French trailer… so here’s that.

It isn’t for lack of trying though. The animation is great, music is enjoyable at worst, and there are plenty of great parts to the show. I wanted to be sure to mention that, because I know I harped on the negatives more than anything. At the end of the day, this one just wasn’t for me, which is a darn shame.

Now that you have read my anticipated thoughts on Run with the Wind, do you agree? Share your thoughts in the comments! If you would like to support my efforts here, please click my donation button which can be found below. Finally, thank you so much for reading and I hope you are having a great day!