Solid Followup to the First Season

I first took a look at Mob Psycho 100 for my Anime ABC’s series. The first season contained its share of cliche but was presented with a unique visual style and sharp contrast to ONE’s other work, One Punch Man that it couldn’t help but capture the attention of several viewers. Nearly 3 years later, Mob and friends are back to continue the story right where it left off.

All admit, at first I really wasn’t that into Mob’s second season. There were a few reasons for this, some more minor than others. The first big reason was writing, I just couldn’t get into the early episodes. They weren’t about Mob improving himself, and generally were pretty uninteresting. Now this does change later on, which we’ll get to, but it made for a poor first impression.

Reason 2 is more minor, but switching from dubbed voices to subbed voices to watch this as it aired was a bit of an adjustment. Having now fully experienced both casts, I have to say I preferred the dubbed cast. Thankfully, for those of you reading this, you won’t only have one option and can make the choice to best satisfy your preference. That’s pretty awesome!

Finally, the third negative to me is actually the new OP. While I appreciate the exploration of animation history and obvious effort that went into its creation, I just didn’t like it overall that much. It didn’t get me hyped up for the episodes like season one’s “99” by MOB CHOIR did. There was exactly one thing in this OP I thought was excellent and that is when Mob’s face flies off in layers only to slam back on again with that slick transition. Anyway, it is a good opening, just wasn’t what I was looking for I suppose.

Moving past these things, the show really started catching my interest with the Mogami arc. In this arc, Mob’s world view is challenged by a jaded psychic who traps him in a depressing world. Devoid of the friendships that shaped who Mob is normally, and lacking his memory, Mogami tries to get Mob to use his powers for evil in his constructed world.

Normally, this kind of thing would fail because the hero remembers his friends and blah, blah, blah. However, in Mob Psycho 100 II, it doesn’t entirely go that way. Mob does fall from grace so to speak and it isn’t until Dimple physically shows up to snap him out of it does the “power of friendship” actually kick in. This may seem like a difference of semantics, but it really was a critical detail that took something that would have otherwise felt cheap, turning it into a more meaningful moment.

I know that there were several folks who did not like this arc due to the fact that it discusses luck and privilege when it comes to the kind of people we all become, but that is just a reality of life. In some ways this seems to contradict the main idea that you are the protagonist of your own life, but I don’t really believe it does. You are in control of your choices, but that’s about it. Even the most ideal person can become corrupted by other people’s influence.

If anything, it is interesting food for thought. The series really starts moving after this exploring more resonate ideas and staying true to its central narrative concrete.

The second arc that really let the season shine was Reigen’s arc. I don’t want to spoil it, but it was very strong. For narrative purposes, both Mob and Reigen really grow as characters and the story is somewhat emotional. It felt really good.

When things are at their height, the show pulls a sudden tone shift that was excellently executed. On the one hand, it was pretty safe to assume that we were being tricked, but on the other, Mob Psycho 100 is the kind of anime that could get away with a sudden shift in tone, because it has before.

Still, Reigen’s arc followed up by this was the absolute best the anime has ever been. For that alone, I am satisfied with what season two had to offer here and would recommend it. However, it isn’t all perfect.

After this, the show becomes a more stock shonen experience. Like season one, this isn’t an inherently negative thing, but it does cause things to leave some of its unique shine. I still like a good shonen battle, though in this case it felt more tacked on.

The evil organization Claw makes its return, and this time Mob must confront the true leader. It would have been foolish to think that this confrontation wouldn’t occur in the second season given that it is built up from season one, but the story to this point wasn’t really concerned with that. That’s why I say it feels tacked on, it just happens…

Now the transition to this story is strong, as I noted, but once the charade is dropped, it becomes about what you’d expect. It’s not like it suddenly stops conveying its message or loses value, but the experience is cheapened by some degree at the very least.

Something that is interesting that comes out of this final arc is the introduction of a character named, Katsuya Serizawa. In a lot of ways he and Mob are similar, the only key difference comes in how their psychic talents were fostered. 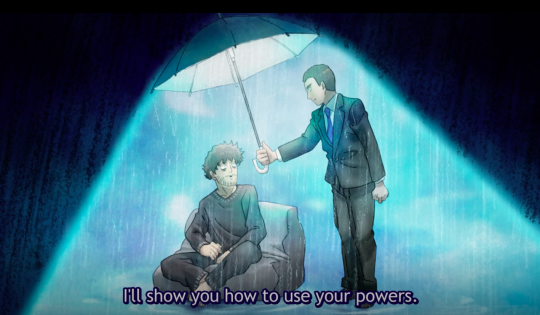 Like Mob, Serizawa has a “mentor” in Claw’s leader. Having a parallel that reinforces Mogami’s arc was a great idea and one that made an otherwise basic conclusion to the story feel more meaningful. It also brought home that phrase I keep using, you are the protagonist of your own life.

For me, that’s a worthwhile message that we all need to hear every now and again. With so many things out of our hands in our daily lives, it is easy to forget that we are in control of how we choose to let those things affect us. Will we foster adversity for self betterment? Will we wallow in despair when tragedy strikes? These are defining choices we must all make and Mob Psycho 100 encourages us to chose the option that keeps us moving forward in a positive direction.

This is what I’ve always liked about this anime series, it’s encouraging. Even though this season had some pretty low points, it also had some great highs. I can’t say it is as good as the first season, but as a sequel, it is more than deserving of your time if you liked the first installment.

What are your thoughts on Mob Psycho 100? Did this second season deliver for you? Let us hear your voice in the comments! If you would like to support my work please click the donation button below. Finally, thank you so much for reading and remember to treat each day as an opportunity for improvement!