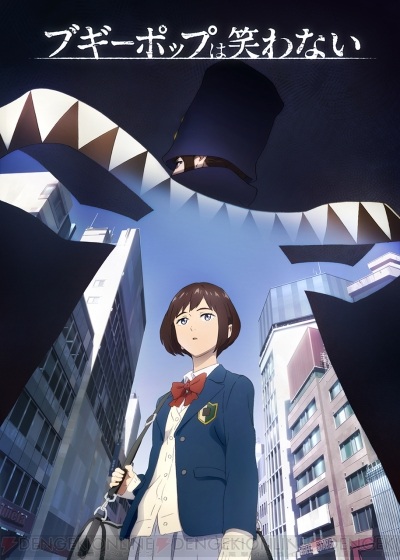 When it comes to Boogiepop, my relationship with the franchise is a more complicated one. Very rarely do I have any real knowledge of the source material, and in turn, does that impact my watching. Further more, it is even more rare for me to have seen multiple adaptations of said work. This is the case with Boogiepop Never Laughs which has lead to an obvious question, so what is even worth engaging with here?

Let’s start with the 2019 version, since that is ultimately what we are going to discuss here. If you want something that is going to follow the books in a fairly close 1:1 way, no need to look further. As far as adaptations go, this hits on the bigger ideas but you miss out on smaller details that flesh things out.

In addition to this, some minor changes were made in how a few characters are portrayed which makes some of the storytelling less obvious. On the surface this is going to seem like a complicated and confusing story, but if you stick with the series for its entire 18 episode run, you’ll find that it is actually pretty simple.

Does that mean I’d recommend the source material over this latest adaptation? Yes and no, this too is a complicated question. In a way, the novels are better because of the small details and little references that the material makes to the real world. However, it isn’t like this new work lacks value. Really, it is a matter of preference.

Boogiepop has always been this kind of meandering work that relies heavily on atmosphere. It has a disjointed story that begins with little to no action before becoming a complex web of characters, organizations, and entities. The advantage of the recent anime is that it is easy to see these connections and how they play off of one another.

If I had to point to moments that the show excelled in presentation it would be with two of its arcs. The first being the origin story of Boogiepop himself. This is an aside, but Boogiepop is male despite inhabiting a female body, a detail like this is explained in the books but only kind of hinted at contextually in the anime, it is stuff like that you miss out on. Secondly, the “King of Distortion” arc manages to capture the right kind of feeling, generally at least.

The criticisms at the show, however, are many. This latest adaptation is slow, clearly stretching out some of the material and dropping some detail early on. While it does improve over time, it was clear that this lead to a loss of interest in viewers as this was airing. All of this is not helped that Boogiepop is something that must be taken on a whole, and not really its parts.

Coupled with this is the obvious importance of pop psychology. For some, this is going to give the series a pseudo intellectual vibe that may be off-putting. Personally, this is a matter I’m indifferent on but I’m aware that this is a thing that does bug people so it bares mentioning.

Lastly, the production of the 2019 version is fairly unimpressive. Visually it isn’t all that special, even lacking in capturing any mood or atmosphere which is inherit to the property. Sound wise, outside of the OP, there was nothing that impresses. I did enjoy the King of Distortion’s music, but mainly because it broke away from the relatively safe choices up until that point.

I can’t be done with this review here though. My initial question hasn’t been addressed at all:  is this better than the 2000’s version? You see, this isn’t the first time Boogiepop has received an animated adaption. Let’s discuss some key differences. 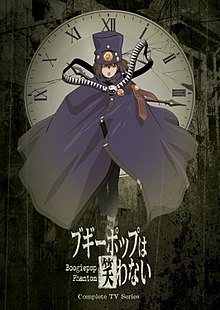 As I already mentioned, if you are looking for accuracy in adaptation, you’ll want the 2019 version. The 2000’s “adaptation”, if one can even call it that, doesn’t really follow the source material at all. I know that this may have lost some of you, but stick around a bit longer because Boogiepop Phantom still has merit that may interest you.

Right away, you’ll be able to tell that Phantom has this darker, almost gritty atmosphere. There is this kind of ugly washed-out film grade effect, which can be somewhat distracting, but enhances the tone. Musically, there is an unsettling vibe that is given off. The storytelling is almost horror focused, as opposed to being more of a mystery with the 2019 version.

While it is true that it pretty quickly abandons ship on the source, the first anime adaptation is a lot stronger when it comes to overall presentation. Phantom almost feels like watching something akin to Serial Experiments Lain but with more horror elements. It doesn’t always work great, some of it can be a bit boring, but it creates a more cohesive product than the 2019 version.

Despite having watched Phantom nearly three years ago, I remember several moments from the show. Compared to the newer installment, that is a huge advantage. Even though it wasn’t all that long ago, I can only think of a few things I might remember from the newer series in that time.

At the end of the day though, both series are quite different. I would encourage you to try them both out because of this. Each offers its own unique spin on the franchise and tells its own story. For me, I like the feeling of the first series but felt a bit more engaged with the newer one.

Phantom just became freely available in dub form in its entirety on YouTube from the publisher, so it is legal. Previously, it was only the first 2 episodes. That should save you the trouble from having to track it down since I’m not sure you can stream it anymore.

Fun fact, this is not actually the original trailer. You can find that here though. It is wildly different and has a lot of content featured that was never actually in the 2019 version (which is a shame).

Let me know what version you prefer if you’ve seen both or if you plan on checking either out. Don’t be afraid to reference the source either, but try not to spoil stuff. I’d love to hear where others stand on this. That’ll do it for this one folks.

Shows with multiple adaptations are kind of an oddity. What other examples can you think of? I just come up with FMA. Share your thoughts in the comments. If you would like to support my writing here, please click the Ko-fi donation button below. Thank you for stopping by and hope to see you around again soon!

4 thoughts on “Boogiepop Never Laughs – Better Than the 2000’s Version?”