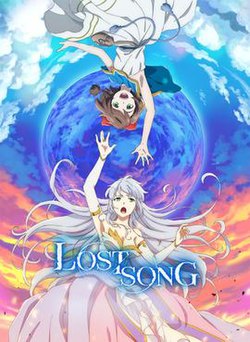 Continuing my journey with anime on Netflix, I decided to watch Lost Song after the disaster that was Hero Mask. The description got me interested in this because it said there would be singing and a quick cursory look at the staff revealed that Yukari Tamura (you may recognize her vocal performances in shows such as Island or Higurashi) would be a prominent character. While not every roll of hers involves singing, this one seemed like it obviously would, and that was enough to get me to watch. Unfortunately, the show had a lot of bad reviews, but I was convinced there might be something to this one.

On the surface, this is about as generic a fantasy story as you can get. The characters and plot are very straightforward with not a lot of complexity. This has been one of the larger complaints leveled at Lost Song but I actually don’t view this as a problem at all. To me, this felt like a knock-off Ghibli film with a lot more emphasis placed on music à la Disney. Additionally, the straightforward nature of the show made this a nice watch in the evening.

However, this is deceptive because the actual plot of Lost Song is more complicated than it first appears. When I first started the anime, I made a tweet mentioning that if you liked Island you may enjoy this show. Primarily I was talking about the music, but it turns out I was a bit on the nose with that comparison.

Without going into things too much, the show has a fairly large twist about halfway through the series. Even when I knew that was coming (I accidentally saw a spoiler…) I would not have expected the show to go in the direction it did. Was this necessary? No, not really, but Lost Song was a LOT better for it.

I suppose I should mention the initially flat characters and “black-and-white” morality this show has. Critics argue that this takes away from the program, making it unwatchable for adult audiences. Of course, I am inclined to disagree. For the first half of the show, the characters do feel flat and the morality is pretty rigid. That said, it was still fun to watch.

For example, the initial bad guy just looks evil. His first spoken line is in regards to how poor people who can’t afford water are worthless. Still, the vocal performance by Todd Haberkorn in the dub was a lot of fun. In a way, all the characters acted as you would expect in a children’s story. The princess is kind but a bit clumsy, the main character has a dream in heart and a song to sing, the knight is ready to swoop in and save the day, etc… Though, as I mentioned, this all gets flipped on its head part way into the runtime.

Positives are to be had here though. The main character, Rin, is a decent female lead who is quite capable. In that way it reminds me a lot of Ghibli movies. She needs her friends to help her achieve her goal, but she can accomplish a lot on her own. It was nice to see.

To be fair, I do agree that if you think too hard about things that the reasoning behind certain aspects of this dramatic shift don’t make a ton of sense. It relies on characters being pretty dumb, but at the same time this show is clearly directed toward a younger audience. It’s digestible.

Or, I’d like to say that at least. My only real “complaint” with Lost Song is that it seems to be unsure just how child-friendly it wants to be. Most of the show is, but then you have displays of some pretty graphic stuff. It isn’t Berserk levels of trauma, but you are going to see folks burned alive, just as an example.

The sudden grimdark shift is something I personally celebrate but it does confuse exactly what the show is going for, at least surface level. Really, I am one to believe that kids can handle a lot more than we think and there isn’t that much here that is all that extreme. Just something to be mindful of.

On the topic of negatives, I should point out a few other minor issues. The character designs for a few of the female characters are not great. Pony “totally my real name” Goodlight is the biggest offender in this department and another aspect that makes the narrative feel confused in regards to who it is actually targeting.

Animation wise, this is not going to impress much. It looks alright most of the time, only ever looking incredible maybe once or twice. Otherwise, it looks kind of bad when they have to utilize any CG. Thankfully, it isn’t that often or put in the forefront, but when it does happen it is kind of jarring.

Finally, some of the humor is a bit juvenile, but again this can be chalked up to the show being for a younger audience. I don’t think that detracts from the quality and it’s not like the jokes are lowbrow or anything. At worst, one might find them slightly obnoxious since a few of the jokes are repeated.

Up until now, I haven’t really mentioned the music, which is a big highlight. Critics even said this was bad, aside from one song in a few cases, but I wholeheartedly disagree. The biggest reason to watch this show is for the music. Some of the tracks see more use than others, but they never get overplayed.

I was pleasantly surprised to learn that some of the music is even on Spotify. However, it is mainly the OP and ED. Though they did include one of the biggest insert songs which is very good. I’ll include the links below, however I actually don’t suggest you listen to all of the music. I’d play the song that is just characters on the Konomi Suzuki one, which is the OP and TEARS ECHO (ED) from the other. This is so you can avoid spoilers.

The opening kind of reminds me of LiSA’s music

Speaking of, after the big reveal, they play around a bit with the visuals of the OP and ED which was really cool to see. There are just enough hints within the show itself and the OP that it all makes sense, but nothing that was super obvious. I didn’t notice the most obvious one right until the actual episode the twist occurred.

Additionally, the musical transitions were very smooth. Even though I was watching this dubbed, whenever a song came on, it didn’t feel unnatural or weird that they were suddenly singing in Japanese. I’m not a big fan of the English acting for Finis for the first half of the show, but she was the right choice.

Another unique thing that I enjoyed was how the magic in this world worked. It is all powered by song. You have the four elements, each with their own song, and a few special ones. Each time a person used magic, you’d hear the same song, but outside of a few exceptions, they would play different parts of the actual track which was larger. Each is a full song, just a shame you can’t listen to them all on Spotify.

The magic has some rules, which are a bit arbitrary, but that’s alright. I’m just impressed by how unique it was. People with the power of song are super rare and everything is centralized around the powers. Seriously, I can’t think of any other shows or films where this is true for the entire thing.

Lastly, I just wanted to touch on the ending. Again, no spoilers, but I’m glad that it didn’t wimp out. The show tells you point-blank that an event will happen, and then it does. They didn’t magically undo anything, which added a lot to the show. Even with the teaser for a second season, which I don’t think the show needed, I was fine with it. I’ll gladly watch another season.

Lost Song is something I would buy. It’s true that it is a bit too simple at first, but if it grabs you, then you will be surprised. The experience was an enjoyable one. Despite how deceptively simple things seem, there is more going on than expected and I think a lot of people will enjoy that so long as they are paying attention. Some of it is pretty goofy, but that’s just part of the fun. There is a lot more I could probably say, but I think this article is long enough. Go watch Lost Song on Netflix.

What are your thoughts on Lost Song? Do you wish more anime had musical elements like this? I’d love to hear your thoughts in the comments below. Please consider giving me a donation if you enjoy my articles by clicking the Ko-fi button. Of course, thank you so much for reading and have yourself a wonderful day!