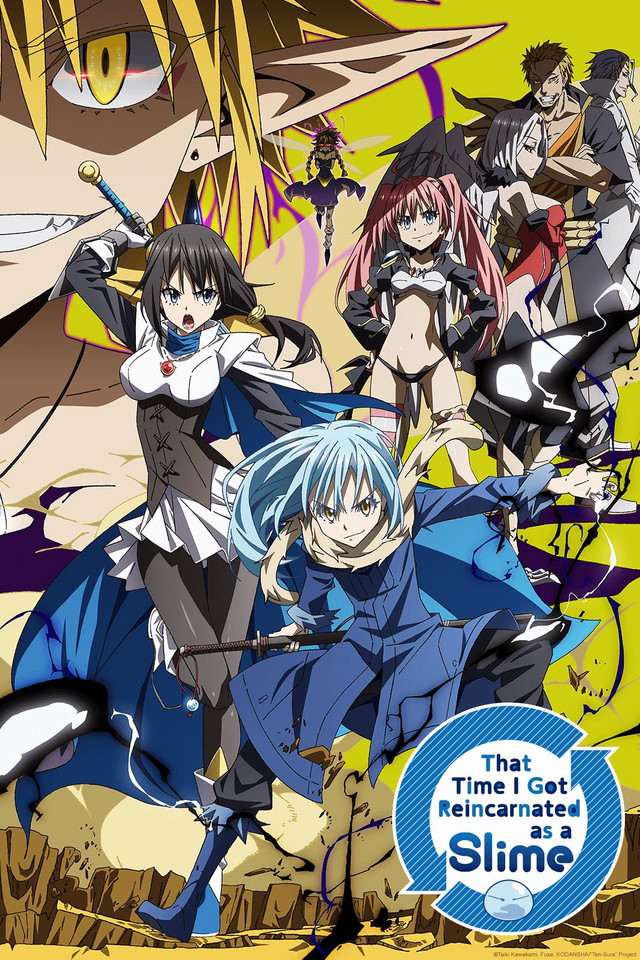 Originally I tried to transform the lyrics into some semblance of a review, but that ended up being quite the undertaking! Instead, you’ll have to settle for a regular ol’ review of That Time I Got Reincarnated as a Slime, or just Slime, for short. There was a lot of enthusiasm for this one at the start of Fall 2018 but was it able to hold onto that momentum through Winter 2019 across its 24 episodes?

In case you have been living under a rock and need some catching up, Slime is about a modern day Tokyo salary man who lived a pretty boring life. Then one day he gets stabbed. As the life fades from his eyes, he has some wandering thoughts that a mysterious voice takes note of. Then, before he knows it, the man finds himself living life as a slime in another world. Why a slime? It satisfied all of his dying requests of course!

That’s not the most elegant synopsis but it kind of something you should watch for yourself. The start of Slime, while slow, is an extremely good one. Shortly after being brought into this world, Slime Boy begins to learn a great deal about the world and himself. Then, he meets a mighty dragon, who you may recognize as the Tsundere Dragon that everybody was totally in love with. The slime is then given the name Rimuru Tempest and the journey begins proper. 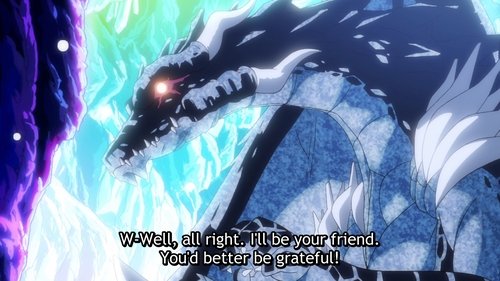 As we slowly learn more about the world alongside Rimuru, it feels like we are watching a show akin to Log Horizon as far as the world building is concerned. Initially this was the huge draw for both myself and a lot of folks watching. Adding to this was a nice sense of humor, as well as a very likable main character in Rimuru.

For the entire first half of Slime I’d say that this stays true. Everything is a great time, with my only real, and huge air quotes around this, “complaint” in these first 12 episodes is that things can be a little on the slow side. Don’t get me wrong, a lot happens episode-to-episode, but it always felt like you were just getting deep into something interesting before the credits ran.

If anything, this speaks to the quality of the world building and the interesting things going on. We quickly go from making friends with a dragon in a cave, to saving some goblins, to starting a whole monster town. Rimuru really just wants to live a quiet normal life, but it seems this world has other plans for him. He does it to himself though because he’s constantly trying to learn more about the world around him.

Outside of the way the world is built up, something that is really unique early on is the way Rimuru obtains and uses abilities. The mysterious voice heard when he died a human is like a magic computer that lives in his head, turning this new world into a kind of RPG video game. As such, Rimuru has a lot of neat abilities that this voice helps him utilize to their fullest. Also he gains more by eating things of course!

At the start, these are some visually pretty cool sequences and the “Grand Sage” ability (the voice) has a bit of its own personality as well. This all works well in combination with each other and caries the show forward in these 12 episodes.

When it came to Rimuru another aspect that put a smile on my face was just how expressive the animators made him. Despite being a ball of slime most of the time, he had a TON of expression. It was really cool to see what little things they’d do to convey what Rimuru was thinking or feeling.

Finally, the height of the first half is Shizue’s arc. We learn that other humans are sometimes brought to this world. Rimuru takes an interest in Shizue, at first because of a prophecy stating he should be with her, which he interprets as a potential romance, but quickly their bond exceeds that. It makes for a powerful moment in the series.

You see, Shizue is also Japanese, but she is from a different era than Rimuru. Without spoiling things too much, she had a hard life. Her family in her original world all died and then was basically forced into servitude as a child in another world shortly after. What’s worse, she had no choice but to participate in some horrible acts.

When Rimuru learns about this and the fact she came from the war torn time of World War Two, he shows her how Japan recovered and moved into the modern era. In a way, this kind of felt like shameless nationalism, but it was a great scene that really never got topped during the rest of Slime’s run.

Perhaps you noticed I’ve really only talked about the first half so far? Good on you, I’ve been avoiding talking about the second half because I feel conflicted on it. On the one hand, I did enjoy the second half, but on the other, it felt incomplete and my enthusiasm for Slime each week began to dwindle.

Some of this will undoubtedly be remedied with the second season which is a ways off yet, but as things stand, the second half dives into larger scale conflicts and ideas without ever actually getting to the point with any of them. This isn’t to say what does happen is bad, because it isn’t, but you can’t help but feel like you were promised a lot more than you got.

You almost start feeling like the show is stalling for time a bit once Millim is introduced as a character. She’s a Demon Lord, and kind of obnoxious. For whatever reason she gets a lot of screen time and is such an obvious plot device. Her whole roll is to take care of something Rimuru can’t and then she just leaves. While it was nice to see Rimuru not be the most powerful thing on screen, I never minded that bit and her character felt kind of unnecessary.

I should say, I didn’t even mind Millim that much. She was fun to have around, but she was built up as being a lot more important than she actually ended up being. Also, because I feel like it should be mentioned, this girl has a thing about not wearing pants. There was a good meme about it, I’ll try to include that as a pic below.

The final arc of the show is Rimuru saving some children who are similar to Shizue, in that they were ripped from their home and time. Without his intervention they will die. It was really Shizue’s wish that Rimuru would help them. All good, and even a fun time. Jokingly, I even called this part Slime becomes Assassination Classroom for a bit.

However, it concludes on a rather lackluster note. Not in that things aren’t resolved, but that the yield of this noble quest, doesn’t further anything we know about the world. It certainly lays some groundwork and hints at some stuff, but it detracts from the picture we were effortlessly painting prior.

If this was where Slime officially ended, it would certainly be a case of starting strong only to peter out. However, as I mentioned previously, this is getting a second season. If everything that was clearly setup in this second half of season one gets some decent payoff, it very well may have been worth the wait, but as it stands it left Slime feeling like it failed to measure up.

What’s worse is the bonus episode which focuses on a part of Shizue’s past. It’s a great episode but it only emphasized the problems with this second half. Compared to this portion of the show, the bonus episode was almost invigorating. You more-or-less know how it is going to end at the start, but there was a lot more going on this episode than a lot of the latter half’s run. It reminded me of how the first half felt, though a bit more action oriented.

Still, this episode lent itself for yet more setup for season two. I guess now all that’s left is to wait around for the second season. Truly, I hope that it is well-worth the wait and that there is still a healthy interest there. I enjoyed my time with Slime, I just wish it hadn’t left me hanging a year to see more.

What are your thoughts on Slime? Did you have a good time throughout or was the second half a bit lacking for you as well? Be sure to share your thoughts in the comments below. If you would like to support my tireless efforts, please utilize the donation button below this paragraph. Lastly, thank you once again for taking the time to read and hope to see you back here at Jon Spencer Reviews again soon!