A Sense of Lonely Whimsy 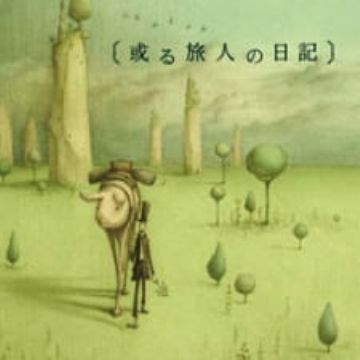 Once again my paying attention to Digi has paid dividends. Love him or hate him, I do often stumble across excellent recommendations, especially of more obscure titles. One of his recent videos, “Finish or Fail A-pocalypse #2: Ayashi no Ceres & The Traveler’s Diary” convinced me to check out the show in question today. With six, three minute episodes, The Diary of Tortov Roddle is worth checking out for just the novelty alone.

Immediately, you’ll notice that this short series has an art style that is not often seen in animation. It’s as if you are watching a moving painting mixed with a silent film. Of course, there is still music, and even occasional “speech” but even silent films had orchestra. My point is, it is visually very unique and striking as a result.

Each episode features Trotov Roddle as he travels the land on a long-legged pig. The places he visits have a sense of wonder and whimsy, but everything is drenched in this lonely, almost melancholic atmosphere. Each episode, while some better than others, manages to give you something to contemplate while feeling a bit for the titular character.

I couldn’t help but feel inspired while watching these episodes. They offer great writing hooks or fuel for role-playing games and are one reason I would recommend this show. Beyond that, as I mentioned, is the sheer uniqueness. I truly have not seen anything quite like this.

It’s a shame that these are so short, and that there are so few episodes because I would have gladly watched more. I do know of some specials and other similar works by Robot Communications, but I haven’t had the opportunity to track those down. Thankfully, this work of art is archived on YouTube at the very least.

Episode six is where I felt this desire for more the most. That episode is truly a masterpiece on its own. While on the whole, I’m not quite as impressed with the entire anime, that episode really demonstrates how you don’t always need a lot of time to tell a great story. If you aren’t really interested in this, do yourself a favor and at least watch this one episode, I promise that you will not regret it.

For such a short show, I did have a bit more than I thought I would to say about it. However, I fear that further discussing it would only diminish its value so I’m going to end this article here. If you have about 16 minutes and want to see something unlike anything else, then you simply cannot go wrong with The Diary of Tortov Roddle. Until next time, safe travels.

Had you heard of this title before? How about the other works by Robot Communications? What was your favorite episode? Be sure to share your thoughts with your fellow readers and myself below. If you would like to support my writing and encourage me to seek out more obscure titles like this one, please consider a small donation by using my Ko-fi button below. Thanks for reading, and have yourself a wonderful day!

6 thoughts on “The Diary of Tortov Roddle – A Moving Painting”