Killing, Stalking, All in the Name of Love

My mom pestered me about watching Netflix’s You awhile back and I finally sat down and finished it over the weekend. It’s about a man, Joe, who after having his heart broken, falls in love with a beautiful woman, Beck, when she visits the bookstore he works at. However, Joe is a bit obsessive and is willing to do anything for love, even if that means a murder or two. 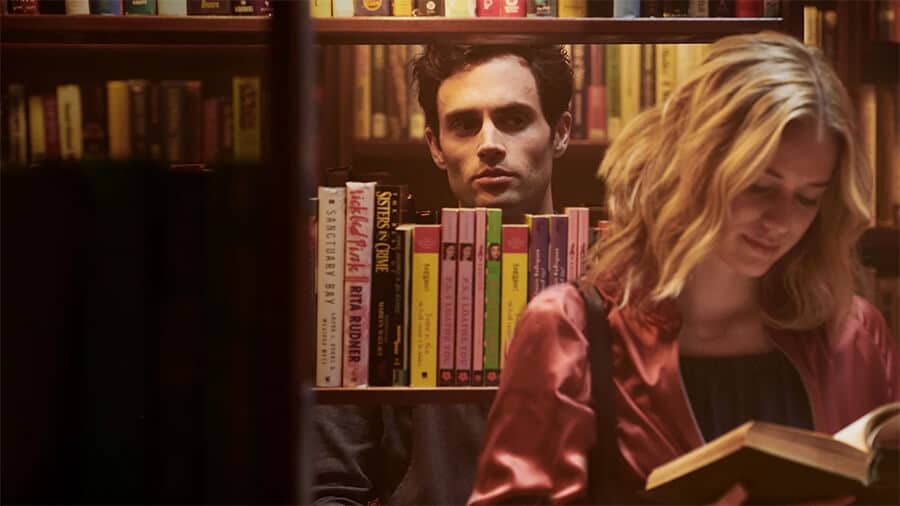 On paper I totally get why my mother thought I’d enjoy You. It’s got some mystery, suspense, and tinges of horror. After a couple of episodes, I was pretty interested in the program, but as the show went on, it began to fall apart. While it is certainly entertaining, You ended up being little more than just an ok experience.

I have two complaints with how this show is put together. The first being that it relies heavily on sex to keep the audience engaged. I get that this is a story about love and obsession, but it was so perverse that it got kind of annoying. You needed these scenes, but at the same time, there was enough other stuff going on, that I would have preferred to see some focus placed elsewhere. That brings me to my next issue, the way the crimes Joe commits are handled.

Joe makes a lot of mistakes but is never really punished for them. The show tries to convince you that he might, but it just kind of leaves that stuff hanging. All the police in this show are super incompetent. Not running DNA, no pinging cellphones, etc… the investigation into the crimes committed in You are almost non-existent.

This really broke my immersion. Joe should absolutely not get away with all the things he does. When the plot introduces a chance for him to get caught because of his mistakes, it isn’t really given any focus. It’s a background item at best. This should have received more focus. It would have been incredible to see some back-and-forth between the love story and the police getting closer to Joe. Even if he won out in the end, this would have been a lot more satisfying.

It’s not all bad though. The directing was really excellent along with the music and sets. When it came to the cast, especially Joe’s character, the acting was convincing and well executed. You is a show that lives or dies on how convincing the characters are, and on that front it does deliver. Joe, as messed up as he is, really isn’t a bad guy. He comes off as sympathetic.

Excluding the start and end of You, everything else in the middle is relatively engaging. Seeing how things escalate further is a big draw. The problem is when the show doesn’t know when to stop doing that. This is based on a series of novels, and they are trying to be faithful, so maybe it all comes together, but with just this one season, I was not left satisfied.

Like the other original properties Netflix brings on (though this first aired on Lifetime), You has a sequel bait ending. I’ve mentioned this for shows like 13 Reasons Why and how I’m not a fan of that. Things felt pretty wrapped up, as imperfect as they were, and then You comes in and does a pretty big S2 bait. It’s already got the greenlight at least, but I’m not sure I want it.

At the end of the day, You was a good show in terms of entertainment value. The characters are awful people, and you don’t really root for any of them. Joe’s actions, though bad, don’t feel unjustified, and for a story like this, that is critical. I mostly focused on the negatives here, but there was a good show mired in the weeds. If you haven’t given You a chance, I’d say check it out because it may just become your latest obsession.

Have you seen, well, You? Share your thoughts with me in the comments, but do your best to avoid spoilers please. If you would like to support my writing, you can do so via my donation button. Thanks for stopping by, and I hope to see you back here at Jon Spencer Reviews again soon!