I’ve Been Waiting to Watch This for Ages! 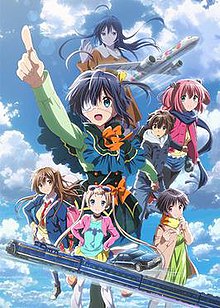 Ever since I watched the first season of Chunibyo back in 2015 I found myself becoming a big fan of the franchise. Even when the second season rolled around to less than stellar reception, I enjoyed that season, however. So when it was announced that there would be two films, a recap, and the conclusion to the story so far, I was pretty excited. Today we’ll be looking at Take on Me, the (current) conclusion to the Chunibyo series.

What made Chunibyo such a special series was the balanced blending of fantastical comedy and grounded drama. My perspective with light novel adaptations were that they were always comedies, and generally, were just pretty average. However, this series proved that not to be the case.

I absolutely love the bombastic, “other world” scenes the series does when the cast lets loose with their imaginations. The comedy is generally sharp and pointed. Lastly, the drama aspects are generally well executed and adds enough depth to the story to really get you invested.

When it comes to Take on Me though, I was just a bit disappointed with the experience. It wasn’t that the story didn’t get wrapped up, that it lacked an emotional conclusion, or anything like that. Rather, it felt just a bit too meandering with some pandering moments for very little payoff.

Some clarification may be in order here. I want to state that I did like this film, but compared to the first two seasons, this is the weakest part. There are whole scenes where characters just show up as moments of fanservice (not the sexy kind, the, “oh hey, I know that character” kind), parts of the plot feel like stalling for time so the characters can decide to end up in the final location, and when it does reach the big moments, they ring just a little hollow.

Part of the problem is the lack of the, “other world” type scenes. There are almost none. That means that this film leans heavily into the serious side of things, which isn’t close to the fine balance the previous seasons provided. I don’t think this is necessarily a bad thing if the serious stuff was really hard-hitting, but it isn’t.

Situations are meant to be taken as incredibly serious but they aren’t really. I understand this is kind of the point, but it detracted from my enjoyment. All this meandering aside, the point that I’m trying to get at is that something is missing.

If you are a big fan of the series like I am, then you should watch this. It does bring a nice conclusion to everything, but understand that it will be lacking in some regards if compared to the series prior. A bit disappointing, but I am glad that things got an ending.

Are you a fan of Chunibyo? Did you have a different take on Take on Me? Share your thoughts in the comments below. If you would like to support my writing please click my Ko-fi donation button. Thanks for reading, and I hope to see you back here at Jon Spencer Reviews again soon!

10 thoughts on “Love, Chunibyo & Other Delusions!: Take on Me – The Perfect End?”