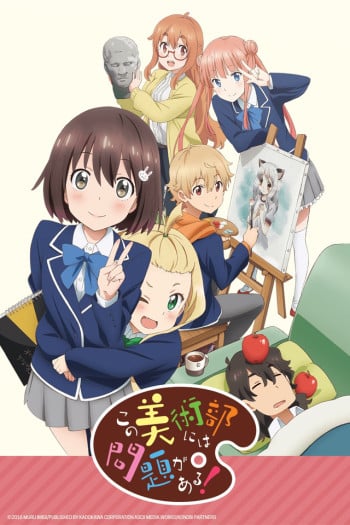 We are roughly halfway through this collab with Yomu now. Art Club! has had some ups and downs but it has been consistently enjoyable once it got over a bit of a hump at the start. This episode we got introduced to a new character, a lady Otaku who grabs Subaru’s attention. Tsk, tsk, Mizuki, you should have just taken some interest in his hobby when you had the chance, I mean he offered to lend you this cool thing he liked but you turned it down for being, “a boy thing” which was pretty stupid. Anyway, this episode I’m actually talking about the secret whispering of the art featured this time around. What shall we uncover?

Turns out, not much. I had the misfortune of picking another dud theme. There has been abundant art each episode and the one time there isn’t is the time I go for this. What luck, huh? Well, don’t fret! I still have a few things I can gleam from the episode so maybe I can salvage this yet.

I’m going to slightly adjust the angle of the theme to talk about references to stuff they bring up that I caught, both to other shows and stuff from within the show itself. That way we still have a bit to talk about.

The first thing I noticed was the, “Dark Eye” talk which immediately had me thinking about Chunibyo. We’ve seen that this show isn’t afraid to make calls to other anime and manga thanks to Aria, so while this isn’t a perfect reference, it may still be something they were going for. This new girl is obviously a bit of a chuni from how she talks, so it wouldn’t surprise me terribly anyway.

Later, when the three go to the bookstore, Mizuki is suggested to purchase a strap of a bunny themed character by Subaru. However, the new girl, Maria, tells Mizuki that the character is evil and she gets mad at Subaru since he said that it’d be perfect for her. Not gonna lie, as much as Subaru is not the greatest, that was kind of a funny joke and Mizuki has earned a bit of a reputation for managing her emotions poorly.

At a more meta level, the episode is art itself. The, “message” this episode seemed to convey is that it is easier to make connections with people when you have common interests. I wouldn’t really call that secret, hence why I just say message, but that was my only real thought there.

As an aside, Collette was in the episode but didn’t do much… She had her magician’s outfit on, so maybe she is gearing up to show us another, “magic trick” later? I wouldn’t mind that at all.

Well, that’s about all I can think of for this one. Sorry it wasn’t overly exciting but that’s the risk of taking a theme blind before watching the episode. Still fun to try and get it to work out even when it doesn’t really. Until next week!

Did you enjoy this episode? How about the other posts by the folks in the collab, which you can find on Yomu’s site? Be sure to stop by for them and say, “Hi!” as well. If you’d like to support my work here please click the donation button below. Lastly, thanks so much for taking time to visit today and I hope to see you around again soon!

9 thoughts on “This Art Club Has a Problem! – Collaboration with Yomu: Episode 6”