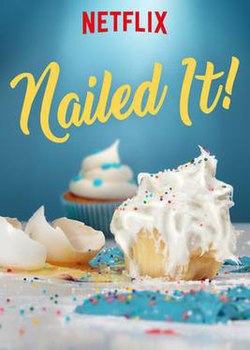 At one of the overnight youth functions I supervised over the Christmas vacation, it was suggested by one of the kids that we watch Nailed it! as a pre-bed activity. The kid in question told us that it was a baking show, but really funny. I’m not a fan of baking shows, but I am a big fan of Nailed it! and the hilarity that ensues when people who absolutely cannot bake get in the kitchen to recreate Pinterest level projects.

Even if you are like me and not big into cooking/baking programs, you should enjoy this program if you like comedy. Not only this, but it is also a great way to actually learn how to bake better yourself, which is never a bad skill for anybody to have. Alright, maybe that’s not enough to sell you. Just take a look at this image:

Now not everything the contests bake on this program turns out as horrifyingly hilarious as this, but this is about what you should expect. Coupled with the excellent direction and energy brought to the program from the hosts makes this easy to sit down and watch several in a row.

Given that this is a Netflix original series, the show is aware that most people are going to sit down and binge this. Listen, I didn’t think I would, but I did. It really is that easy to do and there are a decent number of episodes that will allow you to keep the party going (either alone or with friends, it’s obviously better with friends). That said, I do suggest being somewhat conservative with these because you should never burn through something like this too quickly.

On a personal level, Nailed it! hurts my soul. So many of the bakers are just awful. Not following directions, making obvious mistakes, etc… A lot of the time they get made fun of, and that can come off as mean spirited. It’s my only real complaint with the show, but most of the time they get constructive feedback and walk away learning something.

This is evident in one of the episodes where they have some of the worst-of-the-worst return, and while they still do poorly, they did improve as a direct result of their past experience! I’d say it is generally a more positive show that pokes fun at people who know they can’t bake, which is good.

Earlier I mentioned the hosts. Their are two static hosts, Nicole Byer and world-famous Jacques Torres, have excellent chemistry. Each episode a guest judge joins in on the action and they are almost always great in conjunction with the other two. It is really fun to watch them riff on each other and just generally mess around.

If you somehow missed Nailed It! when it first came out, then you should go and give it a watch. It’s rare that you find something that can teach you something, be largely positive, but also offer a great deal of humor! Netflix, you really have a winner here and I hope you do more episodes beyond the current three seasons.

Have you seen Nailed It! before? What was your favorite episode? Tell me all about it in the comments below. If you would like to support my work please head over to my donation page via the button under this. Lastly, thanks for visiting today and hope to see you back here at Jon Spencer Reviews again soon!

9 thoughts on “Nailed it! – Mini Review”