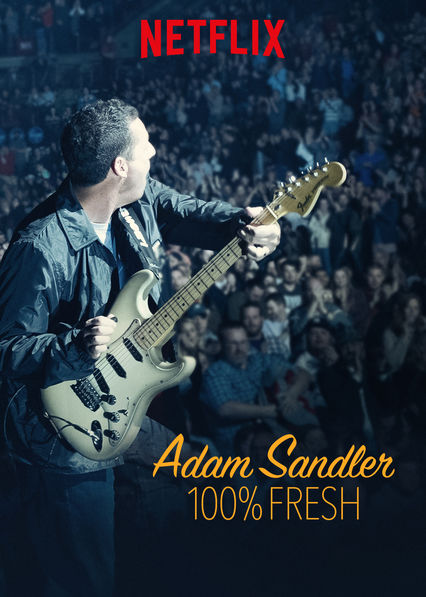 I have never done a full review of a stand-up comedy special, but there is something about ‘Adam Sandler 100% Fresh’ that is extremely noteworthy. “Special” is more than a word to describe it. In fact, this may be the best thing Adam Sandler has done comedy-wise in recent years. While he can be a great dramatic actor with films like ‘Punch-Drunk Love’, ‘Reign Over Me’, and ‘Men, Women, and Children’, his comedic efforts as of late have been nothing but juvenile and forced. Despite his brand of risqué toilet humor being portrayed here, it actually works to full effect. Never has something so dirty been so entertaining to watch and listen to.

When it comes to Sandler, you can either love him or hate him. Most people love him for the ability to make them laugh, while critics hate him for his shtick. With ‘100% Fresh’, however, both mediums seem to be in agreement; I even found myself laughing at this stand-up special more than any other I have seen. I believe that what attracts me to Sandler more than any stand-up comic is pure 90’s nostalgia, with films like ‘Billy Madison’, ‘Happy Gilmore’, and ‘Big Daddy’ to name a few of his works; or it could be that he has an appeal to him that no other comic could muster. It would be the same reason why most people appreciate Kevin Hart, or the late Robin Williams (Not that I am comparing Sandler to either). Most of us rely on that sweet nostalgia (and that appeal) which makes us enjoy their stand-up much easier.

However, a good comic is nothing without GOOD material to keep the laughs coming, and Sandler seems to dish it up with jokes to make your grandmother blush and songs to keep you entertained, including a loving tribute to the late Chris Farley, which will make anyone who remembers the comic legend teary-eyed; proving that a stand-up act can have heart to balance out the laughs. I am not lying when I say that ‘Adam Sandler 100% Fresh’ is worthy of its title, and it is easy to see why. Give it a shot on Netflix!