Two Reviews in One?!?

I’m doing something a bit different today and reviewing two games instead of one. Normally I’d do a Mini Review for each game here but then I thought, why not combine the two? Especially since both games offer a unique spin on their respective game genres and both are relatively quick plays for the more casual gamer looking to kill smaller chunks of time while bored. We’ll take a look at BalanCity first and then Frost, so let’s get to it!

Have you ever thought, “You know what my city-building game needs? That’s right, it all needs to balance on a seesaw-like platform.” If you have, well that’s kind of weird, but then BalanCity is exactly the game for you.

While I wouldn’t say that BalanCity is deep or something you could play for hours on end, it is a fun, yet goofy, take on the city-building genre of games. It features a free build and scenario mode all backed by a simple tutorial that walks you through all the mechanics one at a time.

The free build mode is really fun because you can make it as difficult or as easy as you’d like, with the goal of getting your city as big as possible. The scenarios have different maps and require the player to, “duplicate” a real life city like Tokyo. Of course, you have to be wary of natural disasters and even Kaiju attacks too! However, there are some issues with this game that you need to be aware of.

For starters, you have to do the tutorial and it can be mildly frustrating when things don’t work exactly like they should. The physics, which is the main driver of the game, aren’t always consistent which can slow the tutorial, or worse, mess up an actual play session. I wouldn’t say it is so bad as to ruin the experience, but it certainly is something I found off-putting.

Still, this is the kind of game that if you want to try something totally different and are ok with not getting endless hours of entertainment from a game, BalanCity is something I recommend. Normally it comes in at a cost of $7.99 but goes on sale frequently to under a dollar in some cases. If you can pick it up around the dollar mark, you won’t regret the purchase. You can buy it on Steam or find it on either Apple or Google app stores if that’s your preference (it would play fine on phone). Alternatively, there is a free version you can try here that doesn’t have all the features.

Frost is a pseudo survival deck-building solo experience. If you like solitaire but wish it told a story of surviving a harsh Winter’s travel, then this is one game you’ll want to pay attention to. Frost also has some pretty good looking hand-drawn art that is sure to please most folks.

The game plays similarly to deck-building games like Ascension or Dominion. You have a hand of cards which you play out to achieve the current goal to progress one step closer to your destination in the relentless cold. While doing this, you can add new cards to your deck and remove some even. Be careful though, the storm is always approaching and if you take too long, you’ll surely die before reaching safety at your destination. 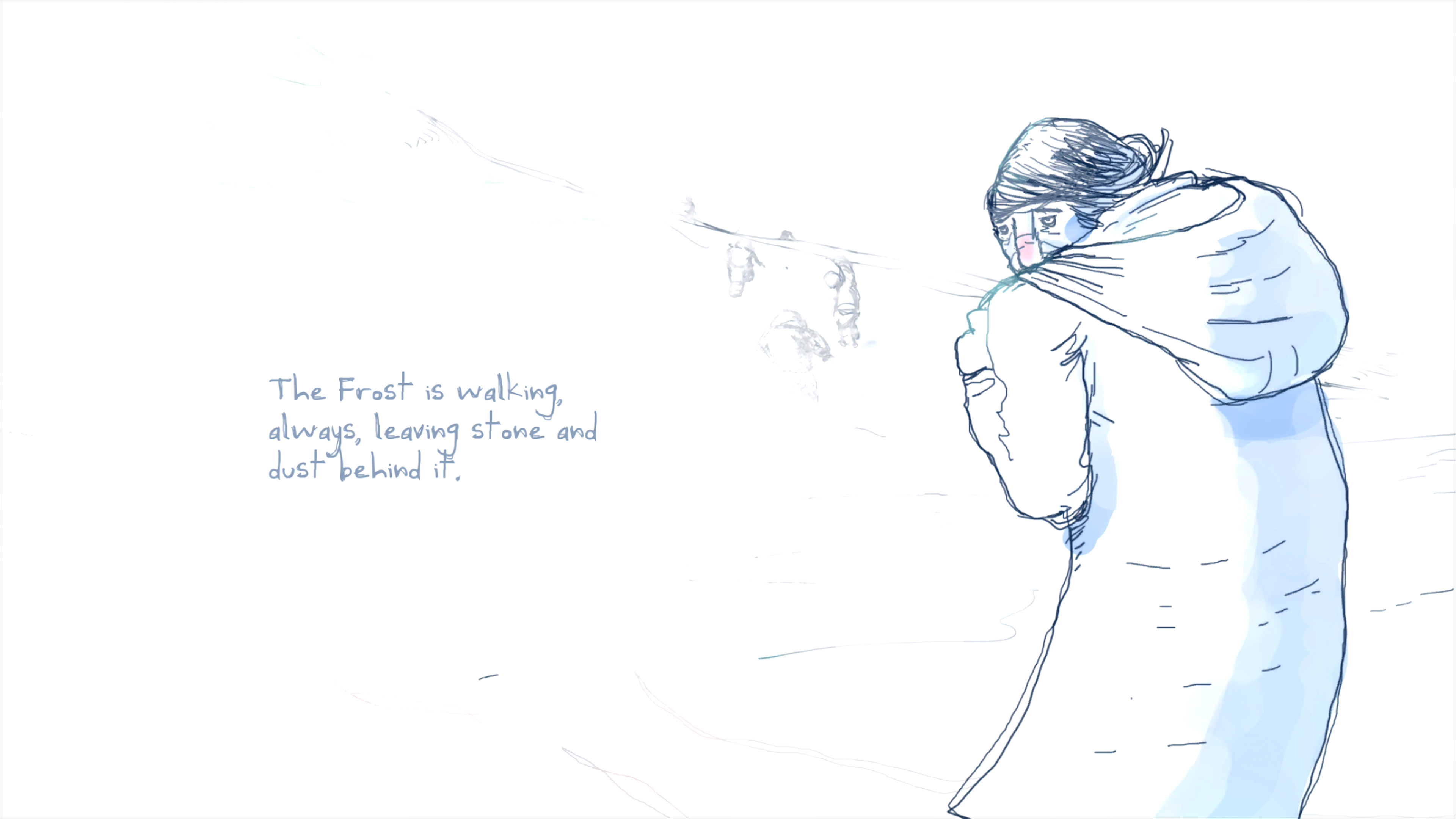 Frost absolutely oozes atmosphere and can easily suck you into its world. This is no small feat for what is essentially a fairly minimalist solitaire card game! It is not hard to see why so many people love this game.

One thing that really impressed me about Frost was that it had a night mode that color inverted things so that you didn’t have to have the overly bright white and blue if that was something that bothered you. Personally, I preferred the white and blue since you don’t play this one in long stretches (though you could) but the option being present is a big plus.

On the surface this is a game that I should absolutely have loved. Deck-building, solitaire, and survival are all things I really like. However, the game itself just doesn’t feel as good as it should. Part of that is that Frost is pretty unfair in what cards it offers you and the goals that you can face.

For example, I was doing a scenario where I had built a great engine that was plowing through the objectives. I had about 4 food, 7 survivors, and 5 wood (which are the basic resources) which is a great setup because I had no negative cards. In addition to this I had a few cards that drew more cards, generated resources if needed, and a weapon card for fending off wolves. I was in a really good place. Then the game gave me a card that asked for 7 food only but offered me no way to actually get more food.

If you’ve played the game before, you know that you can always spend a survivor to get a chance to find a random card at the risk of them dying or gaining exhaustion, but I was doing the scenario where you can’t have any survivors die. Needless to say, I lost immediately at this juncture in the game.

Had this been an isolated incident then this wouldn’t be a big deal, however, it happened a lot! Even with each game unlocking more cards that could appear, they always felt like they just made the game more difficult and the card quality even more inconsistent. Despite its uniqueness, Frost was not for me at all.

That said, it is still a really popular game that is available on mobile devices, Steam, and even PS4! Even though I personally don’t recommend it, I can’t deny its popularity so this may still be something you want to try. At $6.99 it is a fair price for the content on offer, assuming you don’t get fed up with it after an hour or two like I did.

It’s worth mentioning that I received both games for free, but as you can see, that didn’t paint my opinion of either title much at all. Let me know what you think of both BalanCity and Frost. Which of the two games would you rather play? While you’re down in the comments, feel free to share a game that blends different genres together that you don’t normally see so we can all have even more unique experiences to try out!

If you like my content please consider giving a small donation. You can do that by clicking my donation button above. Lastly, thank you so much for taking the time to read and I hope to see you back here at Jon Spencer Reviews again soon!