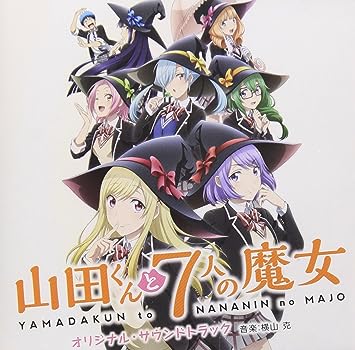 First, a little context. I have two reasons for finding Yamada-kun interesting before even watching it. The first is obviously the body swapping angle. I have this burning desire to experience all the perspectives, and all the things, but I currently cannot do that. Nobody can. However, if one could change bodies with somebody else, you could get closer at least. It’s just a really interesting idea I’m sure a lot of people have thought about at least once or twice.

The more interesting reason is that the plot requires Yamada to kiss someone in order to swap bodies with them. Well, this is a bit weird, but I used to have dreams when I was younger where this would happen. Clearly the author of this manga peeked into my brain when I was growing up and made it into a far more interesting story. Yup, that’s exactly what happened here.

That’s pretty much the initial plot. Yamada accidentally falls down some stairs onto the quiet, Shiraishi, and when they wake up they have switched places. Oh yeah, they totally did it rom-com style where Yamada somehow contorted himself so when he landed he gave Shiraishi a big ol’ kiss. It is goofy but whatever gets the plot going.

Early in Yamada and Shiraishi try their best to keep things a secret but they are just awful at it! Eventually their little group grows and the Supernatural Studies Club becomes quite the motley crew. As the show continues on its 12 episode run, you learn that there are seven witches at the school, each with their own unique power that occurs with, and you guessed it, a kiss.

The first episode of Yamada-kun is really solid. It does a great job drawing you in and it never gets creepy. Everything is established pretty well with both Yamada and Shiraishi being likable enough as far as characters go. Problems start to crop up in the next few episodes however.

Perhaps you remember my look at Ben-To awhile back? Things kind of start leaning into that creepy sexual assault territory, with no justification for it. When Miyamaura and Itou show up they constantly are forcing Yamada to kiss each other and other people, even if he doesn’t want to. This is framed as being super sexy and scandalous… It just feels sleazy, which is too bad because I almost dropped the show after three episodes.

However, it wasn’t like I could just pick this back up so I pressed onward because I really did want to watch Yamada-kun and have it be good. This is where I get to say that I’m glad I did so. The worst part of the show is that initial few episodes and then it becomes quite compelling!

While there are still elements of the danger zone of Ben-To, the show does bother to justify the few times they occur in the latter half. Due to the nature of the powers, sometimes someone had to receive a forced kiss against their will, which is eeeeeh, but at least reasonable in context and not presented in a sexual fashion.

The powers are helpful, there is some interesting thought about using people as tools and forgetting to factor in the fact that they are human. Stuff like that. Not something I want to get into here but an idea to think about for you.

Yamada-kun tries to be a bit too clever with concealing the fact that a certain character is a witch the whole time, but it is so painfully obvious. Surprise it is Shiraishi! Yamada has a special power that lets him copy the powers of the other witches if he kisses them. This really opens the plot up with the introduction of the other witches.

In a way this leads to Yamada-kun having a pseudo harem. Yamada really only has eyes for Shiraishi but some of the other witches take a liking to him. This is the result of him helping them solve their problems, which is what resulted in them having witch powers in the first place.

There are simply a lot of ideas tossed around in this anime, which is great, but with only 12 episodes you can’t help but want more. Characters can feel a bit rushed too. However, everything comes to a well executed finale which managed to resolve all the major plot threads.

Somehow I got it in my mind that this show didn’t really have an ending, as I’m sure the internet was to blame there. Glad to see that wasn’t the case. The final arc where everybody forgets who Yamada is and all about the various witch powers, was pretty gripping. It managed to have me invested where before I almost dropped it.

Minor points worth mention are the OP and ED. They were pretty good. ED, not quite so, but it grew on me. A lot of folks loved the OP for this series so it is hardly a surprise that I liked it too. There is a reason so many folks enjoyed it after all. One last note, the character designs are pretty slick, I like ’em.

Ultimately, is this a good body swapping story? For the most part. It has some bumps but it recovers. It is not on the level of Kokoro Connect but I was pleasantly surprised with how enjoyable Yamada-kun managed to be. Certainly worth watching if this kind of story interests you.

Do you think anime could use more body swapping stories? Did you like Yamada-Kun? Let me hear your thoughts in the comments! If you would like to support my work, please click the button below to go to my donation page. I’d appreciate it. Thanks for reading and I hope to see you back here at Jon Spencer Reviews again soon!

8 thoughts on “Yamada-kun and the Seven Witches – Body Swapping Fun?”