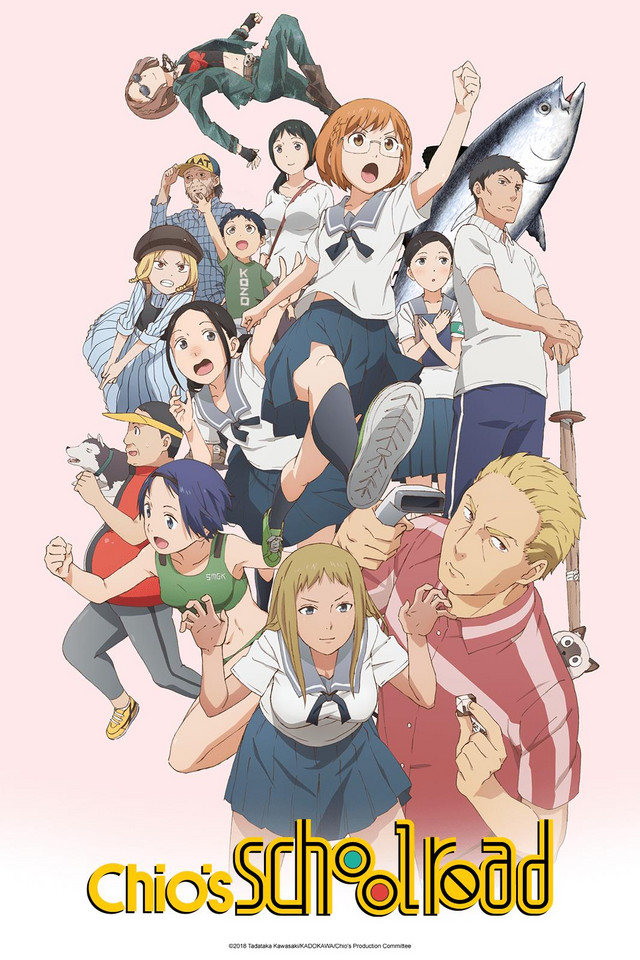 I’m not sure what exactly got me to watch Chio’s School Road but I did. It’s an ecchi-comedy series centered on the titular Chio and her misadventures getting to school. Well, sort of, because half the time it doesn’t even seem like getting to school matters at all. When it comes to comedy anime, I tend to be a lot more picky and the ecchi component definitely didn’t help but there were some pretty high points for the series.

The first episode of Chio shows off how her character totally gets absorbed into video games and then tries to mimic them on the way to school. Later her personality expands to show she’s kind of a loser who idolizes delinquent type behavior. As a premise this is pretty solid.

As more characters were introduced, however, the show became worse for it. While Chio’s friend, Manana was alright, the later of inclusion of characters such as Kushitori actively hurt the show. Being an ecchi comedy, it falls for the trap of making sexual assault the punchline to jokes whenever Madoka, and later her homeless sensei, are on screen. There were other times where you would see panties kind of just for the sake of it too. Not exactly the greatest.

Still there were three jokes that landed particularly well for me that absolutely made the show worth watching overall. The first is the initial revolving joke about how Chio is secretly this super powerful underworld leader named, “Bloody Butterfly” due to a misunderstanding between her and a biker gang leader, Aundo. This whole ordeal gets pretty out of hand to the point where people think that Chio has a special move to summon (poor CG; makes it so much funnier) butterflies to kill people with.

It’s become kind of this running joke with my friend who watched the show with me to exclaim about the Bloody Butterfly in the style of the exaggerated voice acting whenever we see butterflies in anime. I’ve been watching Red Garden with him, and trust me, this makes that show even funnier than it already is.

The second big moment for me in the show is the cat dance thing. I just really love that. I’m going to just leave the clip below for you. It’s also funnier in context but man, still so good.

Crunchyroll put out an official clip at some point but it seems to be gone now? Here’s the best version I could find. Also, the VA’s did the dance IRL too so you can check that out here.

As for the final thing that had me laugh was when the show did a blooper roll for the final episode. They even animated the characters flubbing lines and such. More shows could really benefit from this kind of thing, even if it were short. While not every blooper lands, they are still pretty funny. Additionally they followed up with a, “next season” preview type thing of a bunch of out-of-context scenes that were just kind of ridiculous.

Usually I don’t bother mentioning this but given the choice watch this subbed. I caught a glimpse of the dub, and as a dub fan, it is pretty terrible. It ends up being a lot of yelling and flat joke delivery that is monumentally less funny than its Japanese counterpart. If you enjoyed the dub, power to you, but I couldn’t sit through even five minutes of it.

Despite being hit-or-miss, with slightly more misses than hits, it wouldn’t be entirely right to say that Chio isn’t worth watching. This is one that you’re going to have to try out but I’d give it an episode or two due to the nature of the show. The little comedy skits were pretty amusing and the few that had me laughing, got me hard, so there is something there.

Did you watch Chio’s School Road? What were your thoughts on the series? If you haven’t seen this one yet, do you think you might check it out now? Let me hear your thoughts in the comments. If you feel like helping me out with money because you like reading my thoughts on things, please hit my donation button below. And, as always, thank you for reading!