A Proper Sequel or Flashback Fodder?

It’s no secret that I loved the short ONA series Planetarian when I first watched and wrote about it September 2017. When it FINALLY got a Blu-ray and DVD release from Funimation earlier this year I absolutely had to purchase it. That’s when I learned this little gem had a sequel film the whole time! Obviously, I had to watch this film and determine if this properly followed things up or was absolutely unnecessary.

You may be wondering just how I missed the fact that this had a sequel. Well, I didn’t exactly. I thought it was just a recap film and since it wasn’t listed on VRV at the time (when I watched it, the only place outside of Funimation’s website that I could legally watch it) I just left it at that. The series was wholly satisfying and didn’t really need any kind of additional content.

Still, when the set came in the mail and I saw the film I got curious, and after reading some reviews, learned that this was not just a recap film after all. Well, that’s not exactly true. There is a lot, and I mean A LOT, of recap but thankfully it is real easy to skip.

To properly place myself in the right head-space to watch this film I grabbed my younger brother and we watched the entire ONA series. His first time, my second time. Again, great experience. After a short break we threw ourselves right into the film, which was a new experience for both of us.

Spoilers from this point on! Go watch the series first, it is short.

Surprisingly, Planetarian: Hoshi no Hito jumps pretty far into the future with the previously unamed main character being on his last legs of life. You learn that the main character is named Kuzuya and has actually become a Star-Teller like he set-off to do at the end of the series.

Unfortunately for Kuzuya, he failed in bringing Yumemi, the robot curator of the old planetarium, back with a new body. After collapsing in the snow, he finds himself in a small settlement populated by a few people and a couple of children, who happened to find him. They have power and seem a lot better off than most people based on how things are describe and what was shown in the series prior.

Kuzuya teaches the children about the stars and reminiscences about his time spent with Yumemi. During the scenes where he talks about Yumemi, it is entirely flashback. Nearly whole episodes worth. While the new content is great, these interruptions feel terrible since they break the flow of the film. If you skip them, then you’ll have no problem. That being said, this film is full-length, but maybe a third of it is sadly recap. I would have much rather seen the new characters fleshed out a bit more, or really anything for that matter.

When Planetarian: Hoshi no Hito isn’t recapping the ONA’s, the new story is being told. This is really compelling. Kuzuya wants the children to take his place and bring hope to people who have nearly forgotten what stars are. That’s really all there is to the new story. 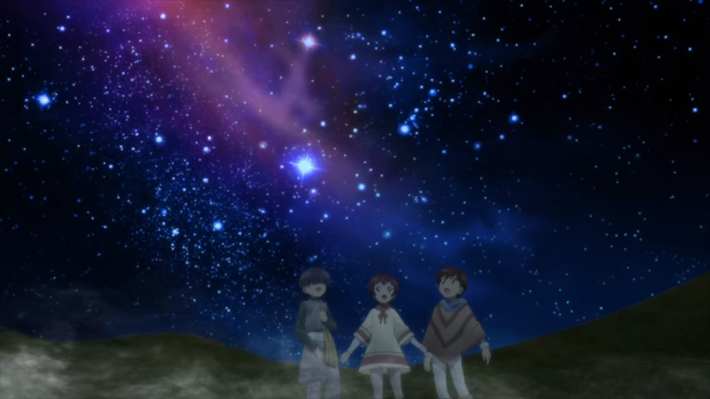 While this may sound kind of underwhelming, believe me when I say it isn’t. Previously I stated that I didn’t think the series needed any followup but after having seen this film, I can confidently say that this is 100% worth your time. It expands the story, managed to be emotional, and was overall a satisfying experience (provided you skip the recap like we did).

I do want to mention that there was one moment at the end that was supposed to be sad but I found it to be a touch funny. I laughed out-loud but still felt the impact of the scene in the way I was supposed to. The symbolism and irony of the ending scenes are really well done though all things considered. If you’ve seen the film you know exactly what I’m talking about, but this would be my only other minor complaint in addition to the more egregious recap problem.

That’ll do it for today folks. Go watch the series and the film now! I’d love to hear your thoughts on them or the game too. If you would like to support the my work here please hit the button below to toss a bit o’ dosh my way. Lastly, thanks so much for reading and I hope to see you back here at Jon Spencer Reviews again soon!

7 thoughts on “Planetarian: Hoshi no Hito – There Was a Sequel Film the Whole Time?!?”