The Stuff Conspiracy is Made of

During the Steam Summer Sale I decided to pick up a few games while they were on the cheap. As per my friend’s recommendation along with one from Mother’s Basement, I decided that I would pick up ALL of the Zero Escape series. Today I’ll be looking at just the first game, 999, or Nine Hours, Nine Persons, Nine Doors. The game is a visual novel escape room hybrid that is embroiled in mystery and conspiracy. By the end you won’t be able to look at the number, “9” the same way again. 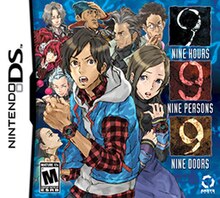 Originally released on Nintendo DS, 999 got an updated release on PC, along with its sequel Virtues Last Reward (VLR) as a packaged deal under the title, “Zero Escape: The Nonary Games.” These were localized and ported over by the prominent visual novel studio Spike Chunsoft. You may recognize them as being behind the US release of such games as Danganrompa and Steins;Gate, which is a testament to the general quality of the projects they choose to involve themselves with.

Many of Spike Chunsoft’s projects involve complicated science fiction mystery series with unique mechanics. 999 is obviously no exception to this. In this game you play as Junpei who finds himself kidnapped and forced to play a game with his life on the line along with eight other participants. The organizer of this game called, “The Nonary Game” goes by the name of, “Zero.” It is soon revealed that one of the nine players of the game is Zero himself but who could it be? Who can be trusted? Why were these people forced to play this game? Lastly, will they even be able to make it out alive by reaching the door marked by the number 9?

While not really an issue in the instance of 999, Spike Chunsoft games are generally criticized for having poor UI. Having played some of their other titles, I have to agree that this is a fair complaint because it can be rather frustrating to deal with. I mention this because the Zero Escape series actually received some improvements when ported over to PC, this being perhaps the most notable.

Other changes that may not be as obvious, especially if you never played the DS version, is the fact that the game is fully voiced (with some specific exceptions like narration) in both Japanese and English. On top of this some puzzles recieved reworks to be easier or more straightforward in nature. Having moved on to its sequel which I’ll be covering in part 2 of this series, believe me when I say all of these things are greatly appreciated.

999 plays in two phases. The first phase is the visual novel component which is how most of the story is delivered. The second phase has the player solving various escape rooms that are filled with riddles and puzzles. In 999 a lot of these revolve around math or code ciphers. Don’t let that alarm you though, most of these puzzles are actually pretty easy. Still, the escape rooms will take you about 10-30 minutes each and require some level of critical thinking. While in VN mode you get to see some cut scenes and have the voice acting. In escape mode you can move the camera around and things play more like a point-and-click adventure. Escape rooms will usually have a dialog scene or two with voice acting as well.

What makes this game standout from most visual novels is that you really only need to manage two saves at most. There is one ending that will lock you out of getting another, but otherwise you could realistically beat this game on one save. This is super important because as you play, each ending you see influences your ability to reach the game’s true ending. At first you will undoubtedly fail at figuring out what exactly is going on but each play through will slowly begin to bubble in parts of the bigger picture. As you play, you’ll notice that you have access to a flowchart that mirrors parts of the story and choices you make.

At any time you can jump back to a different part of the story or escape rooms and take different routes. For your first game I wouldn’t recommend doing this at all, in fact I’d just play it straight, but as you get farther in this will become a vital mechanic of the game itself. Eventually you will notice different colored locks that will require you to take very specific paths to change a previous ending. All of this is integral to the story which revolves around some pseudo science that is loosely based on some real to life theory and fully explained in the game itself. I don’t want to spoil that though so we’ll leave this specific feature of the game at that.

One aspect of 999 that I liked a lot was its length. I was able to beat the game in just over 10 hours. It was tedious to have to replay parts of the game to get the good ending but that was on me for not figuring out that you could hold, “ctrl” to skip previously seen dialog. That said, even then you are still forced to see certain things over and can’t skip them. Still it held my attention and was fun to play even though I figured out the mystery before reaching the true ending.

Coupled with the length is the pacing. It is pretty tight. If you want to get all the endings, there is one thing you can do to lock yourself out of one and that’ll kill the pacing for you immediately, otherwise you should have no issues. I suspect for the average person that you won’t be able to figure everything out for yourself too quickly so the story should remain pretty engrossing. One notable part regarding the pacing is a major change to the final puzzle of the game. This puzzle is stupidly easy and actively hurts the narrative but was changed so you didn’t have to solve a randomly generated Sudoku puzzle like the DS version had. I won’t spoil why this change is dumb from a narrative point of view but from a pacing/game play experience perspective this was a really good move.

One more thing I should mention is that depending on how you play the game might be a little too easy for some people. In my very first play I was able to almost accomplish the true ending on my first try by making certain base assumptions about the characters and information presented. If you are so unlucky as to notice the same things as myself, then this is the one instance where you are probably going to be ahead of the game in almost all aspects.

Speaking of characters, and to a greater extent the writing, 999 has a colorful cast that is pretty interesting. The dialog is often fairly funny but still capable of keeping the tone fairly serious. Each person plays off of each other well and even things like body language and tone of voice comes through pretty well. A feat for sure since in this game characters are 2D. I liked the designs generally in this one, even the more goofy ones. Ace had the cool older guy vibe, Snake had this charismatic presence, Santa had this haughty punk look, and I imagine you get the point by now.

Writing wise, mostly everything makes sense and feeds into the story. There are red herrings but they never take you down a worthless tangent. The pseudo science is also well handled, and as I mentioned, grounded in some real life theories. Some people found this last bit to ruin their experience with the game but knowing that it is going to take a slightly fantastical approach to its story in advance should make this a non-issue.

I didn’t know anything about this game going in outside of some sci-fi elements would be in the story and the general premise of a death game with escape room puzzles. If you are going to play this that is exactly how I recommend you go about playing it yourself. The less you know in advance, the better the experience is going to be. There is more I could say about 999 but then I’d have to really dive into the gritty details. All I can say is, I get why people consider this one of the greatest VN experiences, especially for us mystery lovers out there.

As I mentioned earlier, you can get the game on PC under the title, “Zero Escape: The Nonary Games” which you can find here. You’ll notice it is pretty expensive at $44.99 but that is because it also includes the second game, Virtues Last Reward. I’ll be covering that game in part 2 of this series so I hope you’ll look forward to it. Even at full price, this will be worth it for most people. If you can manage to get this on sale, it is something you should do immediately.

Have you played any of the Zero Escape games? What are your thoughts on this game and the franchise as a whole? Should more VN games incorporate varied game play experiences like this one does with the escape room puzzles? Let me know your thoughts in the comments below. Please be mindful of others and avoid spoiling any of the games in the series though, I haven’t even finished them all yet! Lastly, thank you for reading and if you like what you see please hit the button below to support my writing endeavors. Hope to see you back here at Jon Spencer Reviews again soon!