You guys voted over on my Twitter for me to do a list featuring some anime you might have missed, some might even say obscure, so here we are! I’ve actually done two lists like this in the past which you can read those here and here. So in total, you’ll be getting a whole 15 anime recommendations today! You’ll certainly have a lot of shows to pick from after this.

Much like previous lists, titles featured here are ones I’ve watched. These entries are not ranked in any way and I tried to pick a variety of titles so you can find at least one potential show to give a chance to. Of course, I might have left out a really great title so feel free to make additional recommendations in the comments below for both myself and your fellow readers. Let’s get on with the list!

I just recently finished this one and man have I got to share it! I have a lot more to say on this one than I am here but I mention this because this entry will probably be the longest on the list, but with very good reason. I’ll probably revisit this show later down the road too.

Rakugo tells a compelling drama across its two seasons. For whatever reason, this 2016 anime wasn’t talked about a ton or watched much either. This is extra weird since some major AniTubers even promoted the series as it was airing. If for some reason you glanced over this, then let me assure you that it is well worth your time.

Season one of Rakugo explores what the classic performance art of Rakugo is as well as telling the tragic tale of Yakumo and Sukeroku as they grow up. It starts in the present with Yakumo alive and performing Rakugo and Sukeroku dead. Yakumo has a daughter who vows to kill him and he has taken on an apprentice who he takes in on a whim. Most of this season is spent exploring the past as told by Yakumo to said apprentice and daughter, with some bits even done with that special Rakugo flavor. This is largely setup for season 2. Still, this is filled with twists and turns that are very interesting especially if you are into historic dramas. As an added bonus, you get to learn a lot about Rakugo and see some amazing performances.

“What is Rakugo?” You might be asking this, and the best I can do is explain it as a mixture of storytelling and stand-up comedy. Each performer does the same jokes, but each with their own style and presentation. That might sound boring, but this will have you thoroughly sold after a performance or two.

Season 2 jumps to the future following season one’s Yotarou. His story is well and good, but the real sticking point is the exploration of Yakumo’s guilt over events that transpired in the first season of Rakugo. This was an emotional ride from start to finish and very impactful. I don’t want to spoil anything but it should be noted that astute viewers are going to catch a lot of cool things from each OP and various segments in this season itself. The level of foresight and consistency in this show is through the roof.

Basically, if you check out only one thing on this list, I would be most pleased if I learned that it was this one. Rakugo more than deserves your time and attention. 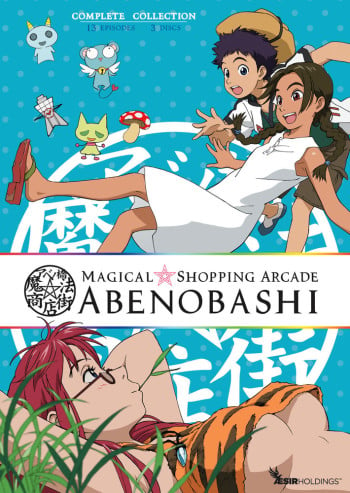 Early into my anime watching days I somehow watched Abenobashi and had a blast with it! The show is really funny despite the ecchi nonsense and it eventually delivers a serious narrative which was unexpected. At least, that’s what I’d like to say. This is a Gainax work after all and the ending comes in and gets real Gainaxed up. If it weren’t for that this would be a personal favorite but the ending leaves such a sour taste in my mouth, undercutting what would otherwise be a fairly unique (at the time at least) exploration of ideas and themes. Still, I recommend this one for a few reasons.

The biggest is that the show is really well done. Comedy is great, pacing excellent, and the story is good too. Despite my issue with the ending, I am in a huge minority there so unless you really align your tastes with me perfectly when it comes to Gainax in particular (as in you don’t like most of their works) then this will probably be a great show for you.

Abenobashi is a coming of age story that takes digs at all sorts of other anime. It did the whole Isekai thing before it was cool, exploring tons of different worlds, each wildly different than the last. Satoshi and Arumi must find a way back home all while coming to terms with reality… well probably, while adding intrigue along with its laughs.

Unfortunately this one can’t be streamed anymore legally, at least that I know of, so you do have to take a risk on the disks but they are really cheap. You can get the show for like $20 dollars, sometimes less, which is a very good price for a show that isn’t talked about much but well worth the time if it’s your sort of thing.

I first heard about Phi Brain from another blogger, Ya Boy Jack on his site The Aniwriter when he did his 30 days anime challenge. I’m going to let his short post do some of the talking on this one though because if it weren’t for that post I wouldn’t have even looked at the show.

He doesn’t really go into what Phi Brain is about but it is basically about a world where puzzles are the biggest deal ever. Your social standing is dependent on puzzle skills, not even joking. One day main character Kaito gets tossed into a giant conspiracy around a secret puzzle organization known as the POG who are looking for someone who can ultimately solve The Puzzle of God. If that doesn’t sell you I don’t know what will.

The first season is pretty nuts feeling something akin to Yu-Gi-Oh! but this was a lot better and more goofy. My only complaint is that the ending of this season was a little lackluster for all the buildup it had. Was a logical ending, if not a bit boring. That said, season two more than makes up for it and I’m only a few episodes in there. This is the only show I’m recommending without having finished it all because I’ve seen enough to know that this is well worth the ride at the very least.

You remember Google Glass? Well that’s what this anime is about. These kids have special glasses that let them see and interact with the virtual world in the physical one. It’s all fun and games until Yuuko Okonogi begins having strange dreams and mysterious viruses begin popping up around town. There are even rumors that part of the web is haunted by a kid who died while using this fantastical technology.

One part comedy another serious mystery with a dash of drama and heaps of adventure, Den-noh Coil is fairly unique. If you like the idea of Ghost in the Shell but want something a bit less heady with some cute kids for leads, then this is going to be right up your alley. While parts of the show can feel a bit slow and dull, the payout is more than worth it nailing it more than it misses.

It’s no secret that I love a lot of Gonzo shows and this is one that is criminally underappreciated. Speed Grapher is a gritty, adult oriented super power show that wanted to really dive deep into everything fucked up. Not going to lie, it even had some nightmare fuel, looking at you Spider-Dentist… I shudder at the mere thought.

The plot is bonkers. It’s about a famous war photographer named Saiga who ends up doing scumming photo work once he gets back to a now sleazy Japan. He takes a job to investigate a secret group of the elite that participate in all sorts of unsavory deeds. There he accidentally acquires the power to blow up anything he takes a picture of with his camera when he receives a kiss from a strange girl.

From there the plot gets wilder and is just something you have to experience for yourself. Great music, innuendo filled episode titles, and definitely not for kids. This one comes with a heavy warning, Speed Grapher is really messed up and explores a lot of themes that center around taboo subjects. It’s not for the faint of heart, but if you are like me and want your anime darker than black (heh, see what I did there?) coffee than you are going to get that in spades with some nice action to boot.

Have you seen any of the anime on this list? Let me know what anime you’ll be checking out and what ones you already have in the comments below. Of curse, I didn’t even scratch the surface of great anime folks may have missed so be sure to share a few of your own while you’re down there! If you like the work I’m doing throw a few bucks my way with the button below. As always, thanks for reading and hope to see you back here at Jon Spencer Reviews again soon!

23 thoughts on “5 Lesser Known Anime You May Have Missed”