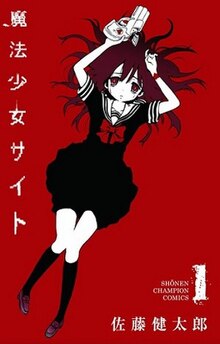 For whatever reason it was really popular to beat up on fans of Magical Girl Site when it was airing in the Spring 2018 season. How could anybody enjoy watching a show where the main character is beaten, sexually assaulted, tortured, probably raped, and on the verge of suicide? I’d turn around and ask how anybody could enjoy Devilman:  Crybaby from just a season prior which everybody raved about. Even more ridiculous was the threats leveled against fans like myself of this series. However, that’s not what I want to focus this review on, because outside of the first episode, the series was hardly what its first impressions let on to be.

While it is true that Magical Girl Site was a darker take on the magical girl genre, something that is still wildly popular, its main focus is on the characters Aya and Tsuyuno. The whole show is about them helping each other, growing, and ultimately turning their prior misfortunes into their current happiness.

I don’t care what anybody says, this really felt like a Yuri show by the end. The two characters clearly are portrayed to have a romantic interest in each other and the big finale is centered on them vocalizing their commitment to each other. It was a surprisingly good turn for the series that I didn’t really see coming when I first started and the biggest reason why I liked it.

This isn’t to say that the show is the greatest or anything. The early episodes keep up the dark magical girl thing for awhile in a way that is just semi-interesting. Aya’s brother is really creepy, and a certain scene involving him and Aya’s blood, made me super uncomfortable. Suffers from too many characters too. Even the end, which was by far my favorite part, was far from perfect.

I audibly laughed at how corny one of the ending lines was even though it was supposed to be touching. The ending also leaves you hanging with that sequel bait. These are things that are probably going to bother other people. However, I thought that the main story of Aya and Tsuyuno was wrapped up well enough and that’s all that really mattered to me by the end. It was the only thing I really cared about with the rest of the plot being something I was only half-interested in.

Quick shoutout to the OP, especially when it changed in a later episode. The ending song was weird, and was even weirder when they did a different one after Nijimi was introduced. I liked those a lot for some reason though.

Would I recommend this? Sure, but a lot of people aren’t going to like it. The first episode does a lot to put folks off from the series, unless you are like me and really into human suffering stories, that’s going to be a giant hurdle. Ultimately, it is just an average show at best but I got a little more out of it than I probably should have. I’d watch more if it ever got a season two, but I probably wouldn’t enjoy it as much.

Did you watch Magical Girl Site? Let me know your thoughts in the comments below. If you want to support the site and throw a few dollars my way, click the button below. That would be appreciated. Thanks for stopping by, and as always, hope to see you back here at Jon Spencer Reviews again soon!