It’s About the Journey, not the Destination 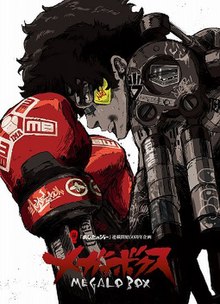 This is something I wholly believe in, but the thing is, the journey has to be interesting. Megalo Box fails to provide a compelling journey, in fact, I’d go as far to say that the destination isn’t all that great either. Despite the heaps of praise this anime received I couldn’t help but feel like watching this one was a chore each week. That said, I don’t think the show isn’t worthwhile or even bad in a technical sense but let me explain the three major reasons that killed it for me at least.

From the moment the opening song drops you better have figured out that Joe is represented by a dog, specifically a scared up stray. Yuri is also a dog, Nanbu is a scorpion, etc… I like symbolism, motifs, and metaphor in storytelling but Megalo Box just kept beating its audience over the head with it. You would have to be an incredible moron (or just not paying attention) not to be able to pick up on this stuff here.

Joe is boring. He is a flat character that I just don’t care about. I get that he has real boxing skill and should be doing better than fixed underground matches but… That’s as far as his character goes. The rest of the cast is a little better off but largely they are still pretty flat. The exception to this being Aragaki (and to a lesser extent Nanbu by association), a military veteran who gets more fleshed out than the main character. I’d honestly have rather watched a story about him.

Obviously, this show is supposed to be about the journey and not the destination. I get that, but the storytelling took all the stakes away from several of its situations by falling into repetitive patterns. For example, Joe would go down nearly every match around round 2 or 3, get up on the count of 9, and then proceed to win in the next round while on his last leg. This kept the matches from ever feeling exciting or interesting. There were two exceptions to this where the fights were battles of ideology, but still, they were somewhat lacking.

Furthermore, the ending for Megalo Box went in the single most boring direction possible. To explain what I mean, let’s jump back to the past with Ashita no Joe an anime which began its run in 1970 and was the inspiration for this anime. The end to that show results in Joe’s death. A lot of folks watching Megalo Box who knew this predicted that it would also end in a similar fashion. Instead, it went the least interesting route possible. Nothing really happens with the ending, Joe wins as expected and everybody is all the better for it. The only character who really loses something is Yukiko but that’s something that is kind of dumb. Not going to get into that but my point is, both the journey and destination are uninteresting.

You may be thinking, “Surely you dislike boxing in real life Jon, how else could you dislike this show?” Well guess what, wrong. While it isn’t my favorite thing to watch or anything, I grew up with boxing and am pretty familiar with it. Megalo Box just wasn’t a show for me.

Still, I do want to point out what I thought the show did well. From a technical standpoint the animation is great, the style of older anime was captured well, and outside of the opening, the music was enjoyable. Aragaki’s story was very good from a writing perspective. There is definitely something here with Megalo Box, but unfortunately the good was buried by the bad, at least for me.

Pretty positive that most of you enjoyed this one, so tell me why in the comments below. Did you happen to agree with me? Then I’d love to hear your thoughts below as well. If you enjoy my content then hit the button below and donate a few bucks via my Ko-fi account. I greatly appreciate the support! Thank you for taking the time to stop by and I hope to see you back here again at Jon Spencer Reviews soon!