Recently I sat down with my younger brother and watched Classroom of the Elite with him. From the start we knew this show wasn’t going to be great, but it had such an interesting premise that we decided to give it a shot anyway. Imagine a school where upon graduation you have exactly the life you wanted for yourself, while at school everything you could dream of needing (or wanting) was provided, and you even received a huge allowance from the school itself. The catch? What you earn is directly tied to how well your whole class does. Anything can be bought with the school’s money, or point system, and I mean anything. Welcome to D class where the, “problem kids” are. Will they be able to rise to great heights with the help of the mysterious Ayanokouji?

The answer:  Sort of. Classroom of the Elite doesn’t really end and the premise isn’t really explored all that well. It’s a big problem actually. Instead I hope you are ready for a lot of vague philosophical conversation and fanservice in place of plot. Yay…

Our protagonist, Ayanokouji, is pretty interesting in the beginning. He’s a guy who doesn’t want to stand out and is completely average in every way. Except, he’s too average to the point of suspicion. He gets EXACTLY 50 on every exam for example, while claiming to be good at self-defense from things like tea ceremony and calligraphy too. The show takes its sweet time to clue you in but, you guessed it, he has a hidden past related to some human experimentation. Exactly what? Don’t know, the show doesn’t bother to really tell you anything about it.

I quickly dubbed him, “Average-kun” and was a large reason I kept watching. I wanted to know more about this guy but the show just didn’t want to deliver on that front. My brother also expressed these same feelings while watching. It was frustrating to say the least. 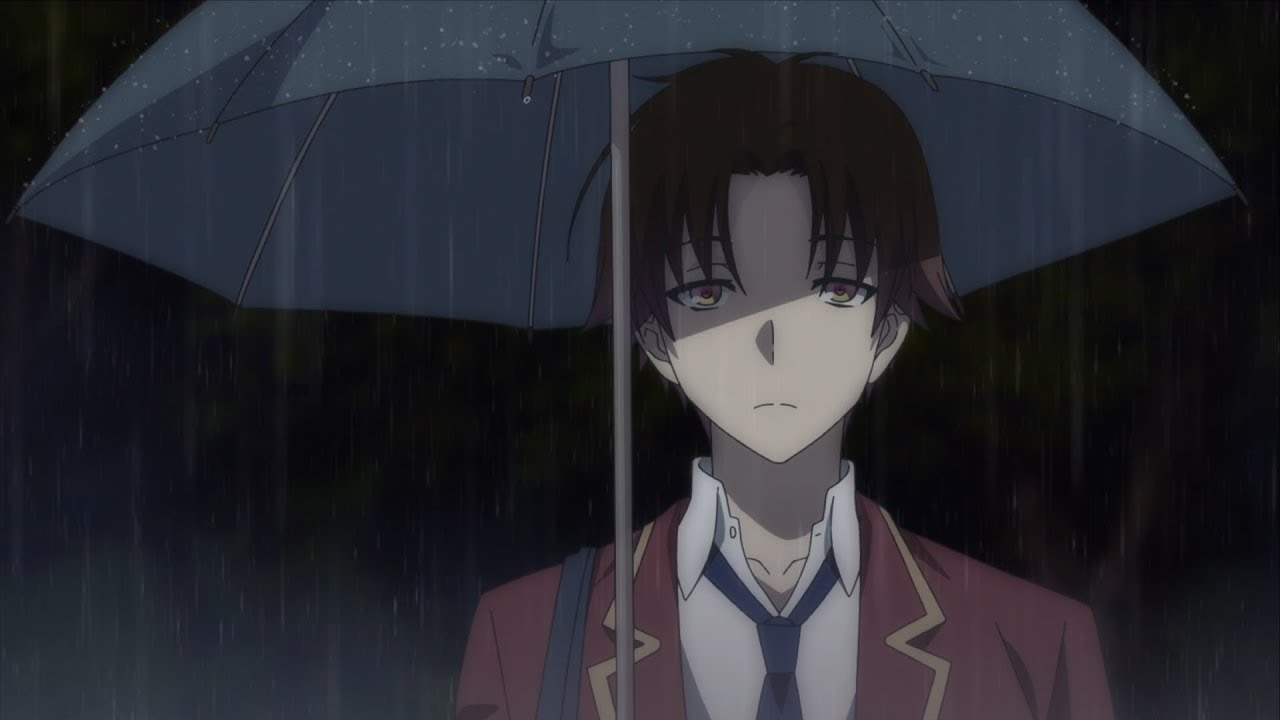 Other than him, there are only really two characters that end up mattering. They are Ayanokouji’s, “love interests,” despite him never displaying interest in either. First up is the cold and distant Horikita. She’s a basic Tsun who doesn’t think she needs friends. Ayanokouji helps her realize that is dumb. Then there’s Kushida who is cute on the outside and friends with everybody, but really she’s a horrible person. Her biggest role in this show is to show her boobs off and act cute/ditsy half the time.

Classroom of the Elite focuses on some interesting scenarios on occasion though. There is an arc devoted to solving a mystery that was pretty decent and the island exam arc was ok as well. When it wanted to, the show could be intriguing and utilized the interesting rules of this school where points can buy you literally anything.

I do also have to give some credit to the OP. The quotes in several languages about human nature, combined with an upbeat singer who is really into the song, was something I enjoyed. The ED was really boring, but it did have this neat idea of telling you how many points each character had… if only it would have actually done something interesting with that.

I give this a guttural daichi out of 10

The rest of the runtime, unfortunately, is largely devoted to vague philosophical ramblings (they just put quotes and stuff from famous people here-and-there about how awful people are) or fanservice. Listen, I can live with some fanservice but there were not one, not two, but three whole episodes out of twelve almost wholly devoted to fanservice with little plot advancement. That just isn’t acceptable.

Even when there was some plot occurring in Classroom of the Elite that did not stop the show from positioning the, “camera” in compromising positions for various female cast members. Is there fair treatment on the guys? No, not really. This level of fanservice was super distracting and became a running gag for us while watching where I’d go, “subtle” every time the show was rambling about how bad people are while displaying various underwear/cleavage shots.

Compounding these problems is the complete lack of any ending or resolution. Sure, an arc is finished up but nothing has really happened. Classroom of the Elite just started delving into Ayanokouji’s past, teasing a legitimate romance opportunity for him, and getting back to being at least sort of interesting only to just end. This is extra dumb since Crunchyroll themselves co-produced this show. Just like Netflix, they signed an incomplete project hoping that it might get traction. Instead of making a good product, it is quite literally half-baked.

Nothing is worse than a show promising something interesting only to reduce itself to being another drop in the bucket of pretty mediocre anime. There just isn’t enough here to even get closer to recommending it. I guess if you just love tons of fanservice with almost no substance than go for it, otherwise be ready for some disappointment.

Happen to see Classroom of the Elite? Let me know your thoughts on this series in the comments below. Be sure to let me know what you thought about this article while you’re there too! If you would like to support the site than please head on over to my Ko-fi and buy me a coffee or two. Hope to see you back here again soon, and as always, thanks for reading!