Here’s a quick look at the schedule in case you forgot what we’ve done so far and what’s to come. Day 3 I’m supposed to talk abut my favorite male character and there are just too many great choices! Hmm, I can’t pick him because that means tomorrow it’d have to be her and… well that’s day 8 so…

I would probably give a different answer to this each time so let’s go ahead and make this a top three instead because these guys are all tied.

1. Kyon – The Melancholy of Haruhi Suzumiya

What makes Kyon one of my personal favorite male characters is his sarcastic, “I don’t care” attitude. Out of my three picks he’s probably the most grounded character and he doesn’t really have any major quirks. I just like the cut of his jib and enjoy his running commentary on the antics in this anime. I also think this is the least interesting choice of my three just because almost everybody likes him too.

Have you seen this clip? Well if you have than you’d know that Okabe is a mad scientist, he’s super cool-sonuvabitch! Man, that line slays me every time. What I love about this guy is his crazy mad scientist persona. A lot of my friends tell me that makes him immediately unlikable and hard to root for but I think they are crazy people! He had me hooked episode one of Stiens:Gate which was one wild ride. Seriously, the best time-travel story in the visual medium period.

Any way, he isn’t just goofy for no reason. Okabe has depth as a character. Additionally, he can play both the comedian and straight man. Without him, I don’t think Steis;Gate would be all that interesting despite its narrative construction. The other cast members are swell too but they just don’t quite measure up to Okabe for me at least. 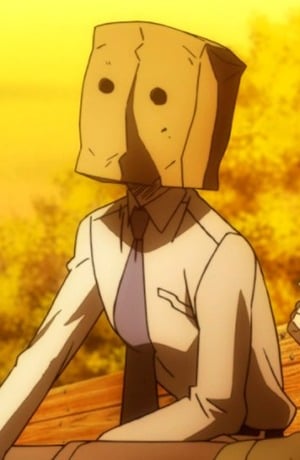 Here is the weirdest choice of them all. Kage Otoko, AKA The Shadow Man, is a man with a bag on his head who loves all girls. Sounds creepy and not at all cool when I put it that way. He’s a master of disguise who uses his power to do Robin Hood-like feats to better the lives of little girls. Maybe I’m not helping my case here? Just trust me, he’s a really great guy and my absolute favorite character from Rampo Kitan which I have already written about at length. He was always a delight on screen. He rode the fine line between being comedic and serious fairly well while also being somebody you wanted to root for despite being, “the bad guy.” I felt so bad for him in that particular episode…

What is your favorite male character in anime? Were you surprised by my picks? Let me know all about it in the comments below. I look forward to seeing you back here tomorrow for day 4 where I talk about my favorite female character. If you’d like to support me, check out my Ko-fi but don’t feel obligated or anything. As always, thanks for reading!