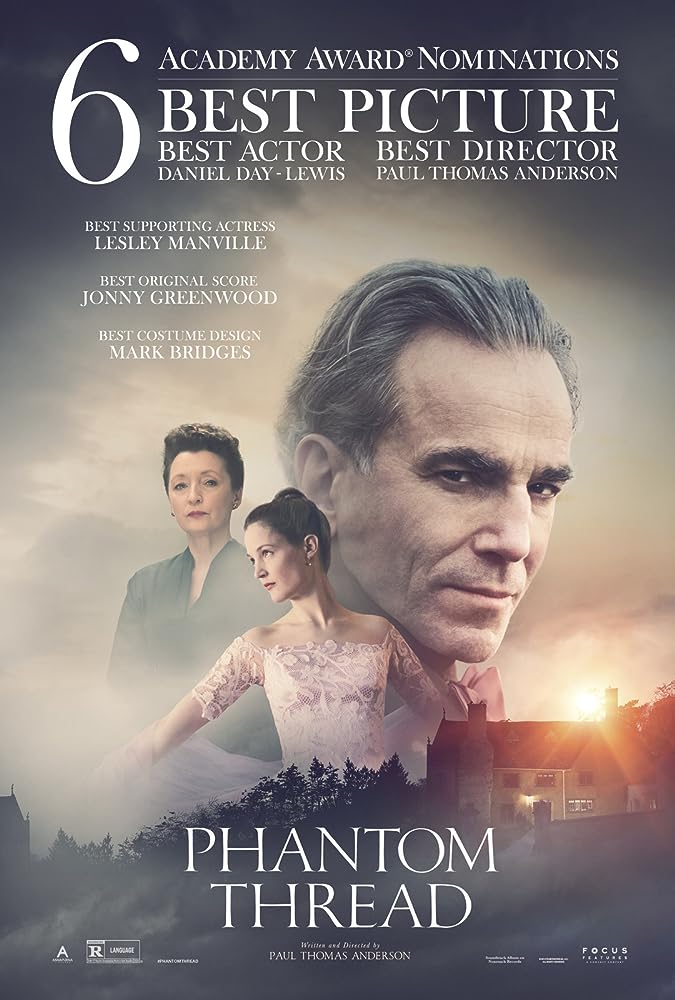 Daniel Day-Lewis gives his allegedly final performance in Paul Thomas Anderson’s ‘Phantom Thread’ (which is also in fact, their second collaboration). Like his character, Reynolds Woodcock, Day-Lewis expects nothing short of perfection in everything he does; both have a method to their madness that can be hard for some to deal with, but undeniably something to admire as the final result becomes. ‘Phantom Thread’ is the perfect goodbye for him, because it feels like a metaphor for his tireless career. While it may be sad to see him retire, we know that Anderson will still be making more stories. I have to admit that I am not a huge fan of his work (except for ‘Punch-Drunk Love’ with Adam Sandler). It is hard to deny that Anderson slips something beautiful in each and every fragment, yet as a whole, his stories take time to digest.

‘Phantom Thread’ is undeniably beautiful in its craft; from Mark Bridges’ costume design to Mark Tildesley’s production design (It is quite funny how to two Marks did designing duties), yet can range from being tiresome one hour to interestingly shocking the next; glittered throughout is a subtle sense of humor. ‘Phantom Thread’ is the story of loneliness, love, fashion, and clashing personalities. Reynolds is a dressmaker, living with his sister, Cyril (Lesley Manville) in 1950’s London who is so intricate in the way he weaves clothing, that he claims to have “hidden things in the lining of the garments” as a boy. Though, he also feels doomed to the life of a bachelor; destined for loneliness, and grief-stricken by the death of his mother.

All that changes when he meets a young waitress named Alma (Vicky Krieps), who he asks out for dinner the same day. Their particular meet-cute blossoms into a romance, wherein she becomes his assistant; trying out dresses he makes. Yet their relationship starts to become quite a challenge as Reynolds’ sense of perfection and Alma’s strong will clash. All I can say is ‘Phantom Thread’ is not your average romantic movie.