My Favorite Anime of the Fall 2017 Season

We have reached the final (official) entry in my journey to review every Fall 2017 anime. Today, I’ll be talking about The Ancient Magus’ Bride up to the mid-season finale. As with the other entries, you can view my initial thoughts on the series here. I’ve saved my personal favorite for last and am excited to discuss it so let’s waste no time!

Having given up on life and haunted by her past (among other things), Chise sells herself into slavery. She is bought up by the mysterious Elias, who is far from human. Despite the seemingly grim setup, Magus’ Bride tells the story of discovering your own value in a world brimming with magic. Mixing the modern age with classical interpretations of magic in our world, and you have a story that truly captivates.

Attention to detail is by far the most spectacular part of the anime. Sure, the animation can at times be stunning. The music is often times excellent as well. Beyond seeing Chise and Elias interact, the main attraction here is the magic of the word itself. Drawing from several different cultures, you can really tell that the creator of this story did their homework.

Drawing inspiration from Japanese culture with the portrayal of the horrific shadowy yokai and legends, various European ideas about farriers and druidic influences, and more! The variety and depth on display in this regard is incredible.

As some of you may know, I occasionally watch some of the anime I discuss here with my mother. She has ducked in and out of this one and continually comments on how wonderful the show is. Each time, however, she never fails to mention the fact that she has never seen a show (of any kind really) portray fairies and various forms of magic as she knows them. 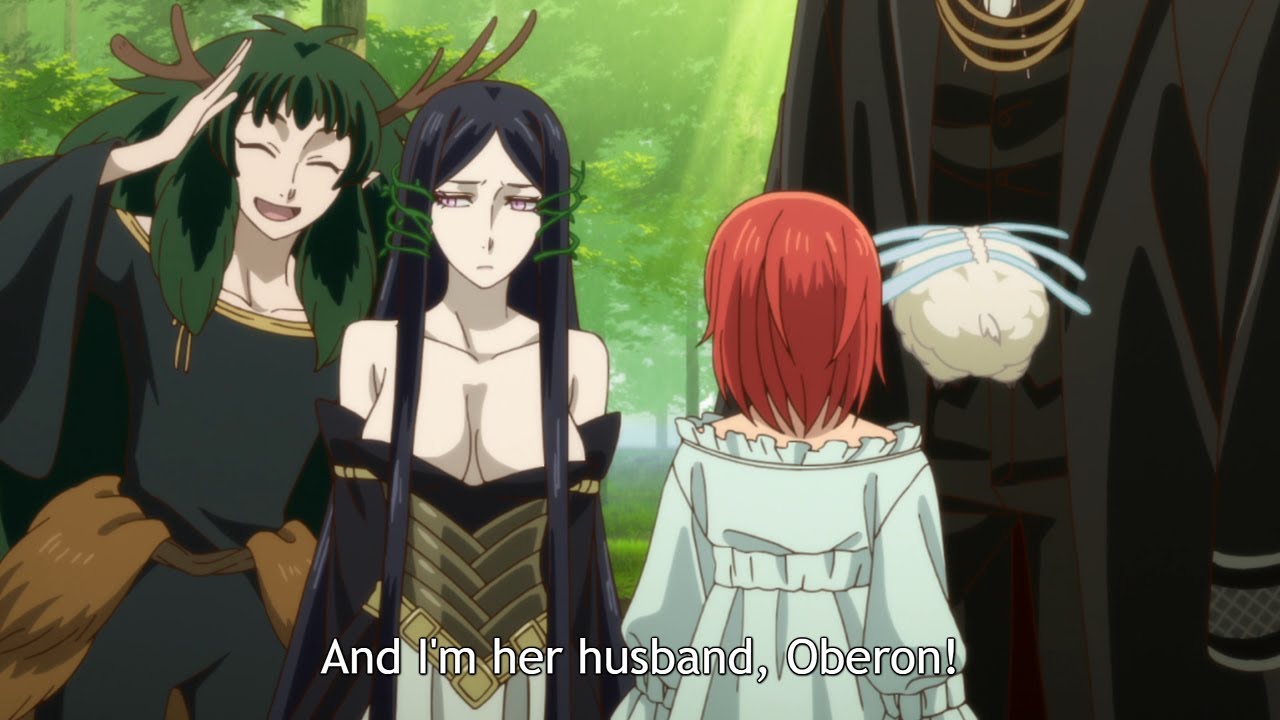 Explanation time, you see my mom hardcore believes in magic and even has some Pegan beliefs (despite being a practicing Christian). She’s heavily influenced by Irish interpretations of magic, so farriers and druids, that sort of thing. Any way, she always goes on and on about how all the little details in Magus’ Bride are so meticulously accurate. Personally, I don’t know too much about these sorts of things, but hearing such lavish praise put on the show is exciting.

Regardless of what you may actually know, the magic in this world is sure to captivate. Words alone really aren’t enough to “sell” just what I mean here. You really need to see the world in motion to fully understand. There are several “wow!” moments, most notably the mid-season finale, but thankfully you can get this by watching the prequel OVA’s easily.

Since they are available alongside the actual series, there really isn’t any reason to skip out on them. They grant insight into Chise’s character, and show off a point that the series itself will eventually get to (and I happen to know that by episode 13, you reach that point). Plus they are stunning, reminding me almost of the works of Ghibli in terms of quality.

Fans have noted the fairly strict adaptation the anime has followed, however. While I haven’t read the manga of Magus’ Bride, those who have are impressed with how closely its been following. Another impressive facet, if you ask me.

Not everything has been roses with Magus’ Bride though. Several have dealt it a hefty amount of criticism in the pacing department. While the OVA’s are near perfect, the series itself ha some slow points. You’ll always be seeing some new part of the world, but learning about the characters is slow. It really depends what you are in the show for. Personally, I love the world here and so I can put up with the slow pacing of the early episodes. However, if you are primarily invested in Chise and Elias’ relationship, than you may be frustrated in the early episodes.

Another thing to note is the fact that some information is repetitious early on. This is only really a problem if you watched the OVA’s, which you should definitely do still, but just now you will get glimmers of that information again in the first few episodes. The reason for this is fairly obvious, there is a pretty good chance that people watching this may have forgotten some parts of the OVA’s (they came out a good time before the show itself) or just haven’t seen them at all. It’s understandable but simultaneously irritating because of the slower pace in the earliest episodes.

Still, everything comes to a climatic head by episode twelve with a real sense of progression. Done with completely jaw-dropping spectacle, the mid-season finale has both Chise and Elias really grow as characters. The symbolic moment with the swelling music and visuals that explode into an emotional finish was something I certainly won’t be forgetting anytime soon.

Lastly, I’ve just got to say I love the OP and ED of this series so much! Especially the OP. It’s a fusion of Latin sound and a quick waltz, which is truly a wonderful combination. Take a look and listen. Enjoy! 🙂

The series may not be over yet but Magus’ Bride is already one of my favorite anime of 2017, if not my actual favorite. I deeply hope that the remainder of the series delivers on what has been on display thus far. If you aren’t watching this already, you should be.

Have you been watching The Ancient Magus’ Bride? Let me know your thoughts on the series so far in the comments below. Please be mindful if you come from the future and avoid spoilers though, thanks! Like the work that I’m doing here, or the work of my contributors? Consider becoming a Patron and supporting the site. For full details, just click the button below. As always, thanks for reading and I hope to see you back here at Jon Spencer Reviews again soon!