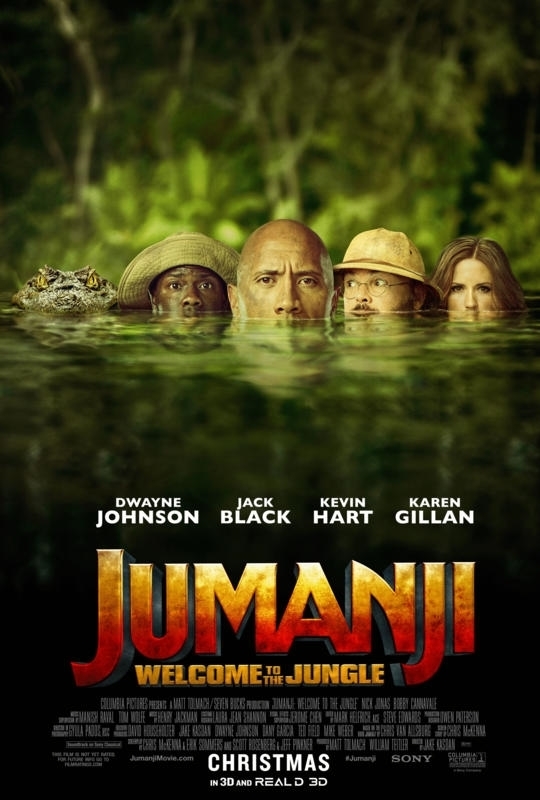 ‘Welcome to the Jungle’ takes place twenty years after the infamous Jumanji board game washed ashore on a beach 26 years after Alan Parrish and his friend Sarah Whittle threw it in the river. Somehow, the game has now been updated as a video game that looks to be made for a SNES console (A prologue shows us that the board game has been retrieved by a man to take home to his son, Alex, who ends up being transported into the game), and eventually found by four high schoolers facing detention as if this were another ‘Breakfast Club’ rip off: Spencer Gilpin (Alex Wolff) – a video game expert who gets anxious, Anthony “Fridge” Johnson (Ser’Darius Blain) – a football star and Spencer’s best friend, Bethany Walker (Madison Iseman) – your modern-day teenage girl who is basically obsessed with social media and being popular, and Martha Kaply (Morgan Turner) – a goody two-shoes and know-it-all.

As expected, they think it is just an average video game, but after every player is selected, they end up transported in the game itself, where they become the characters they picked; Spencer becomes Dr. Smolder Bravestone (Dwayne Johnson) – a muscle-bound archaeologist who has charm, stamina, and like his name suggests; a smolder that stuns, Fridge becomes Franklin “Mouse” Finbar (Kevin Hart) – a zoologist who is basically another Kevin Hart character, Martha becomes Ruby Roundhouse (Karen Gillan) – a master of mixed martial arts, and, in a surprising – albeit hilarious – twist of fate, Bethany becomes Dr. Sheldon “Shelly” Oberon (Jack Black) – a cartographer who steals the entire movie just by speaking in teenage girl tone (and Black owns every moment of it with gusto). From there, they are stuck with three lives, dangerous levels involving wild animal chases, NPC’s typical of a regular video game (You know, the ones that repeat their phrases when you talk to them.), a helpful player named Jefferson “Seaplane” McDonough (Nick Jonas), and a dangerous mission to return a jewel called “The Jaguar’s Eye” back to its rightful place, in order to return to the real world, before Russel Van Pelt (Bobby Cannavale) gets to it.

In a way, ‘Welcome to the Jungle’ is a video game come to life (‘Wreck-it Ralph’ is not the only movie to explore the world of video games anymore). Like Spencer, it knows the world it is inhabiting, and takes advantage of every action. What is even more cool is that – unlike the first ‘Jumanji’ – ‘Welcome to the Jungle’ explores the world of ‘Jumanji’ (with a little nod to Alan Parrish as tribute to the late Williams) proving that the world is really a jungle out there!

4 thoughts on “‘Jumanji: Welcome to the Jungle’ Film Review”