Sometimes, That’s All You Need

Kicking off my look at Fall 2017, is Recovery of an MMO Junkie which is a series that had me invested from the very start. I won’t be rehashing anything from my first impressions so go ahead and read that here if you’d like. While most people found the aspect of blossoming online relationships displayed in this series, today I’ll be discussing why I enjoyed a narrative that was largely on rails. Recovery of an MMO Junkie is fairly predictable, and really pretty average, but that doesn’t mean it isn’t worth your time because it absolutely is.

I had actually written up this whole article in advance but after seeing the recently released OVA episode that was surprisingly on Crunchyroll, I felt I needed to completely redo this article. Forgiveness if this article feels a little “last minute,” because it is. That being said, my thoughts changed enough and the original article was kind of a mess, so it works out best this way. Any how, let’s get to actually talking about MMO Junkie.

While it is true that many people enjoyed this anime for its portrayal of online relationships and the differences between your IRL and online persona, it is far from the focus of the show. Really, these ideas are barely touched upon. Instead, the story focuses on a simple romance story with sprinklings of drama told through a series of coincidences. It doesn’t take a genius to predict just about everything that ends up occurring in MMO Junkie but that’s perfectly ok.

To be honest, this series really doesn’t have that much going for it. The animation isn’t anything special, the music (outside of the OP) isn’t stellar, and I’ve already mentioned how the narrative is basically on rails. Still, the cast is extremely charming and despite its shortcomings, managed to be one of the series I looked forward to watching each week.

Typically, when a show such as MMO Junkie is as predictable as it is, it’s scorned by the anime community. This is because shows like this usually come with a bland narrative, weak characters, and lack of engagement. There is a lot of hand waving to force some cliché narrative down the viewer’s throat. However, this isn’t something that befalls MMO Junkie, despite everything I’ve said.

Outside of the pretty ridiculous level of coincidence that occurs, MMO Junkie makes sure to ground itself in both a plausible world and narrative. While the coincidences are pretty extreme here, they aren’t impossible. This is the only real black mark against the anime but it’s not something I want to focus on.

Instead, I’d like to talk about why I enjoyed this straight forward story. What makes MMO Junkie work so well for many, myself included, was how relatable things were in the anime. There is something here for everyone.

Morioka’s character is one that we can all relate to at some point in our lives. For me, I’ve definitely been where she has before and often second guess myself as she does so many times in the series. Even if you don’t identify with her, she is likeable. Then you have Sakurai, who is equally as interesting in my book. His character acted in a way (at least most of the time) that a normal person would. Only towards the end where they tease the “will-they-won’t-they” does he break from this. It’s solid and felt good to see. 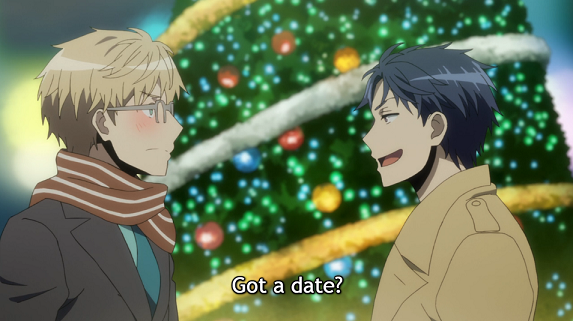 MMO Junkie’s most compelling piece though was the narrative. Despite me describing it as, “on rails” I never felt bored with it. There were minor missteps in that there was a needless recap moment in one of the episodes, but largely the story was told exactly how it should have, and needed to be told. Still, I haven’t really addressed why that worked for me.

It’s true that everything so far helped keep the experience enjoyable but the key factor was that the anime delivered on what it set out to do in an easy to consume format. With everything that has been going on lately, this was a relaxing series to watch that hit all the right notes. There was romance, some drama, a dash of commentary, and some interesting ideas kicked around. In truth, MMO Junkie is only an average show for me but it was exactly what I needed from week to week.

Something I think a lot of the anime community seems to forget is that not every show needs to be a ten out of ten masterpiece. It’s ok to just enjoy something. That’s exactly what MMO Junkie was this season. The surprising thing for me, was that it was so popular. It really goes to show that sometimes a simple story that hits all the right notes is all you need.

At least, these would be my final thoughts except there was that OVA that released. Up until now I haven’t gone into it at all. The OVA changed my mind on a few things. Previously, I felt that the ending was just ok. I wanted to see things go just a bit further which this OVA does. Furthermore, I found the OVA to be quite funny as it harped on the clichés of the trapped in an MMO/isekai stories that have become increasingly popular.

The OVA for MMO Junkie leaves things open for a season two, which makes what we currently have feel like an excellent prolog of sorts. I’m hopeful that we might actually get one since this was an anime that preformed fairly well. Time will tell of course.

While this isn’t a series that is going to blow anyone’s mind, it is still one I recommend if you are looking for a show that has good execution and a likable cast. Like I said at the start, a lot of people fell in love with this series for portraying online relationships so there is that too. Regardless, this was a nice series that won’t waste your time.

What did you think of Recovery of an MMO Junkie? Did it manage to connect with you or did it leave you out in the cold? Let me know in the comments below as I would love to hear your thoughts. If you enjoyed this article please consider supporting me on Patreon so I can keep doing articles like this. For full details just click the button below. As always, thanks for reading and I hope to see you back here at Jon Spencer Reviews again soon!