It’s no Secret that I Love Horror Games

Given the time of year, I thought this was the perfect time to talk about Outlast. This game from Red Barrels takes the premise of a found footage horror film and puts you in the role of the camera man. You play as a reporter looking into a tip about an insane asylum. Pretty cliché in that department, but the game is a great time.

Having been met with a decent amount of success, Outlast had one major DLC and a sequel game. I won’t being talking about either of these though because I haven’t played them yet (unfortunately). I’ll just be focusing on the original game but I do think the DLC and second game look good from what I’ve seen of them.

The biggest disappointment I had with Outlast was the fact that you couldn’t watch back your “recorded” footage after you beat the game. For both practical, and other reasons, it makes sense that you can’t do this but it would have been an amazing touch. It’s a feature a lot of people thought the game would have, so thought I’d be up front about that before diving into anything else.

Outlast is a linear hide-and-seek style horror game, so there is no real way to fight back against the horrors. That being said, since you are a reporter, you have brought along your trusty camera to record the whole experience. A lot of the game is spent viewing things through your camera lens in order to take advantage of the night vision that makes the game have a cinematic feeling.

The trailer got me so hyped for this game before it came out back in 2013. Outlast still looks good today and gives off all the creepy vibes. Give it a watch and see for yourself.

I think it is so cool that the guy puts his hands on the walls. Little things like that, and having actual legs, is already pretty impressive. The trailer for Outlast also gives you a good idea of what the game is like.

Run while doing some hardcore-parkour and hide from enemies when you can, see some spooky stuff, and ultimately try and figure out what’s going on. Of course, you need to do all this without dying too. Easier said than done because the enemies like to pull little tricks on you like the one in the trailer did.

I’m a big fan of this style of gameplay. The minute you put a weapon in my hands and tell me to be afraid is the minute a game instantly stops being scary. You lose a lot of suspense and tension when you can easily fight back with a gun or something. Even in games where weapons don’t really do much, or just stun enemies, it still diminishes the experience for me.

If you are not a fan of this style of gameplay, then Outlast simply isn’t for you. The trailer alone is enough to determine if you will enjoy this or not but if you are still on the fence let me talk about a few of the things I enjoyed the most and the few negatives I had with the game after completing it.

Of everything I have to say that the camera is the most intriguing part of the game. You need to balance its use because it is battery dependent (meaning you can find yourself in situations where you can’t use it if you aren’t careful) but it is such a critical tool that not using it puts you at a serious disadvantage. It also adds to the suspense and scariness factor because there are sections that are pitch black and nearly impossible to see anything without the use of the camera.

However, this is part of the issue I have with Outlast despite how cool I think it is. The batteries, while generously provided, are really easy to accidently use up. They last longer than you think they would and actually change automatically from what I recall but you can reload them manually. The control for that is really easy to hit by mistake and you can find yourself quickly burning your battery supply by shear accident.

Past that, the first two acts of the game are really good. Plenty of scares and chase scenes. They are all really tense and exciting, unless you die. Then you have to replay them and it can bring you out of the atmosphere. If you die enough, this just ends up being frustrating more than anything else. This only occurred for me one time though.

My frustration mounted in a level where you are in the basement (or something, I can’t remember exactly) and you need to reconnect the power (I think). It’s a real maze and so dark with a particularly annoying enemy. It’s just far too long and difficult to do compared to the rest of the game. The thing is though, you can tell that it isn’t supposed to be all that challenging as it is early into the game and it is really obvious what you need to do.

Part of the problem was the battery thing. I couldn’t see for part of the segment because I had no battery in my camera. The other part is that it is really easy to miss the map that makes navigating the area so much easier. What compounded these two things was the enemy, he is very aggressive and good at finding you. He didn’t usually catch me, as I was able to hide from him most times, but he was a persistent bugger who would constantly be blocking the objective. 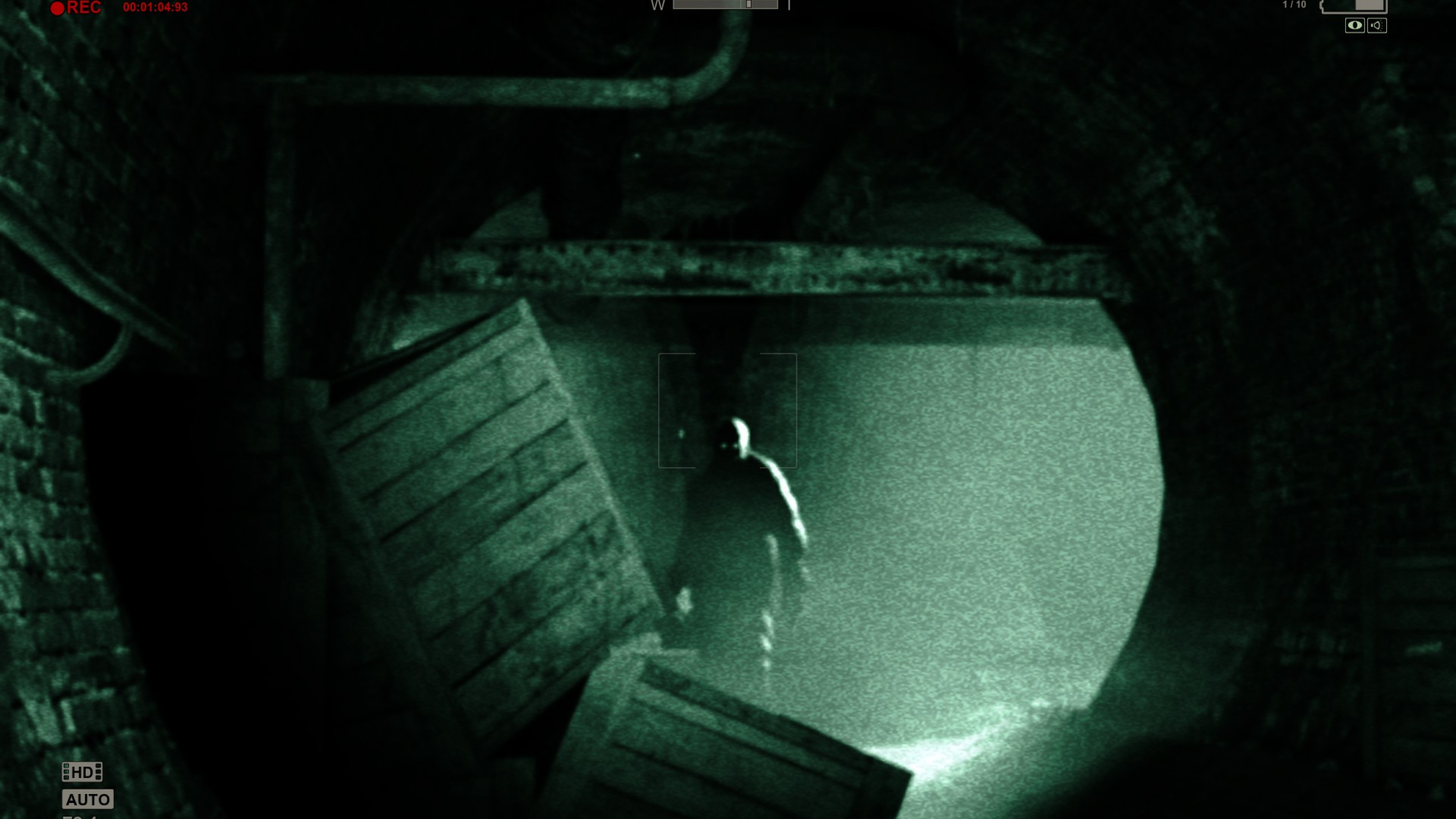 If you can look past that, then a majority of the game is exactly the sort of thing you want to see in a horror game like this. Outlast is tense, scary, and most importantly, fun to play. This brings me to the last act, unfortunately.

At some point, you are going to get an occult vibe from what’s going on in the asylum. That’s awesome. You think that this is where the story might go, it only seems natural. However, this is not the case. The last act of the game becomes a science fiction thriller, more than a horror game. This isn’t to say it is bad on its own, or in wrapping up the story, but I felt somewhat betrayed by the conclusion.

The ending still has its moments and offers a few scares, but it is going to be something that can ruin an otherwise excellent experience. Personally, it bugged me but the rest of the game more than made up for it. Don’t misunderstand, the ending makes sense, it just was kind of a letdown compared to what it could have been.

With that, I still would recommend playing Outlast. Despite the problems I had with it, I did really enjoy it. Outlast is in my top 10 horror games, so although I may have come off a bit harsh toward it, there is a lot to love. Hopefully you grabbed the game (and the DLC) when Humble Bundle was giving it away for free awhile back, but if not you can buy it on Steam for $19.99. It will undoubtedly go on sale sometime in the month (if it isn’t already), so I suggest waiting until then to pick it up.

This concludes our “Fun & Games” week for the October Review Fest. Let me know your thoughts on the Outlast franchise in the comments below and be sure to let me know if you enjoyed the article. If you’d like to help keep me alive, consider checking out my Patreon. Learn more about that by clicking the button below. As always, thanks for reading and I hope to see you back here again soon at Jon Spencer Reviews!

13 thoughts on “Outlast – A Found Footage Game you Can Play”