What Would You do if You Could See Ghosts?

Paranorman is the second film to come out of Liaka Studios. Unlike their first film, Coraline , this film is an original story. Originally premiering in 2012, how does Paranorman hold up today and is it a worthwhile watch? Spoiler; the answer is yes.

I decided to highlight some of Liaka Studios’ previous films after noticing Jacob reviewed Kubo and the Two Strings awhile back. Since their first two films are rather fitting for this time of year I thought this was an ideal way to kick off our October Review Fest. Compared to Coraline, Paranorman is a more comedic family film that adults will especially appreciate.

Immediately, you can tell exactly what kind of film Paranorman is going to be. It opens with a goofy throw-back to old VHS horror films in the old 4:3 aspect ratio before cutting away to the actual film. Norman is a not so normal kid who can talk to ghosts. This is showcased without hesitation by having him talk to his dead grandmother.

I particularly enjoy these opening minutes because the characters are so well introduced. It also definitively spells out Norman’s abilities and how they are (sort of) unique only to him while demonstrating how everyone else misunderstands him.

This is then followed up with a superb scene showing us how the world views Norman as he walks down the street talking to “nobody” before pivoting to Norman’s view where you see how lively the town actually is. It’s only been a few minutes and this movie is pretty impressive. Seriously, if this alone doesn’t sell you on the quality of the direction at least then I don’t know what will.

Stepping away from the general story an excellent direction I’d like to take a second to talk about how cool stop motion is. I’m a real sucker for this sort of thing, and I know I’m reiterating myself from the Coraline review, but it really is amazing how Liaka Studios manages to do such a great job animating its characters and world. It’s just really impressive. 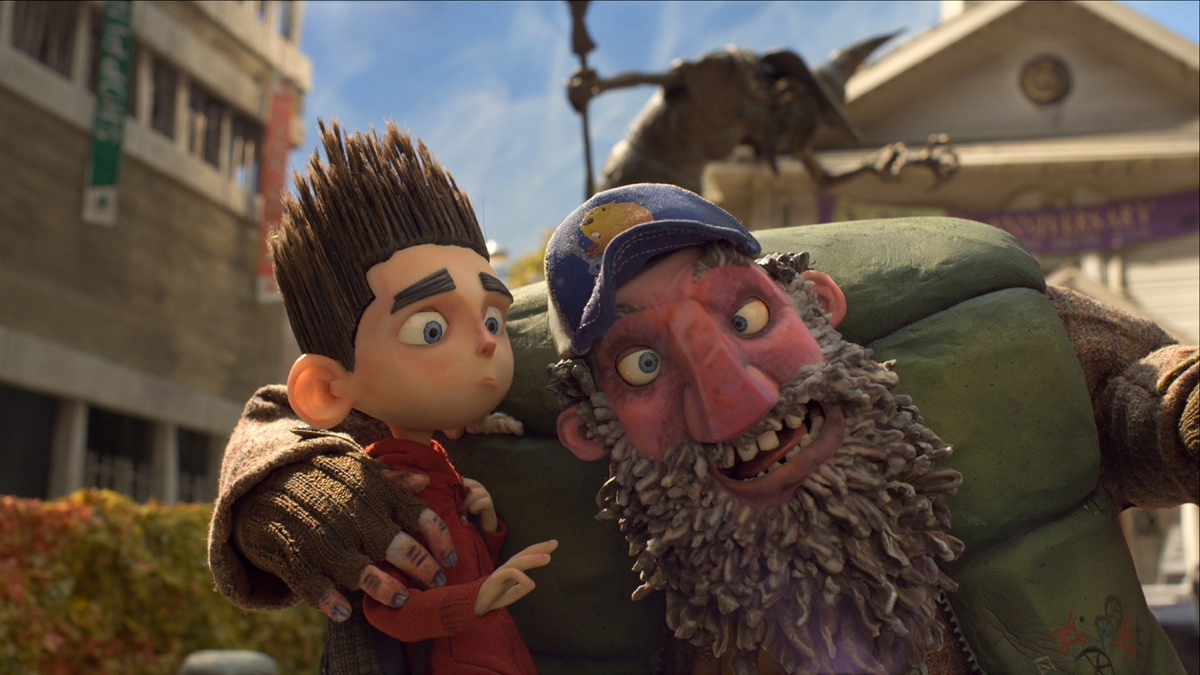 Of course weird stuff, well weirder stuff, starts happening and the plot kicks into gear as it is unveiled that the town Norman lives in has a suspicious past. Norman has to use his ability to protect his friends and save the town. Not that anybody really believes him.

While Paranorman isn’t as spooky as Coraline, there are moments where it is pretty creepy. This is most true in the first act but everything is peppered with humor as to prevent it from being a nightmare festival for children. Speaking of the humor, it is hit-or-miss but that is to be expected since this is a family film. Some of the jokes are particularly funny though, especially the more adult oriented ones.

I love how this movie eventually turns into a cliché horror-fest but in all the best ways. It really fits and is exactly what you’d expect given how Paranorman opens. This might bother some folks, but it really does add to the charm and humor of everything.

The final act of the film is great. There are a couple great twists, including the single best line in the entire movie, that culminates into a touching conclusion. The creators definitely achieved their goal of creating a film about the trials and tribulations that kids face while demonstrating the importance of listening/understanding others with just a dash of social commentary.

Before I wrap this up I want to mention the great voice work that was provided for this film. The line delivery is on point, even when it is being intentionally bad. This movie had the potential to be a lot worse if the acting felt phoned in, but it feels genuine and filled with all the proper emotional backing that it needed to succeed.

So, back to he question I posed earlier:  Does Paranorman hold up years later and is it worth the watch? The answer is an emphatic yes, especially if you are looking for a family film that works for both adults and kids. Adults will appreciate the clever writing and direction while the kids will learn real life lessons while having a good time. There are some moments that might be a bit spooky for younger kids, but it’s nothing that older kids can’t handle.

Have you seen Paranorman? Let me know your thoughts in the comments below. Be sure to tell me if you liked this article while you’re there. If you can, consider supporting me through Patreon so I can continue to produce more content like this. For more details on that just click the button below. As always, thanks for reading and I hope to see you back here at Jon Spencer Reviews again soon!